Moviefone speaks with Aubrey Plaza and Theo Rossi about their new movie. “I just loved the idea of playing that type of person,” Plaza said about her role.

Opening in theaters on August 12th is the new crime drama ‘Emily the Criminal,’ from writer/director John Patton Ford.

The new movie stars Aubrey Plaza (‘Safety Not Guaranteed’) as Emily, who saddled with debt, gets involved in a credit card scam that pulls her into the criminal underworld of Los Angeles.

Moviefone recently had the pleasure of speaking with Aubrey Plaza and Theo Rossi about their work on ‘Emily the Criminal,’ reading the script for the first time, their characters and their relationship to each other. 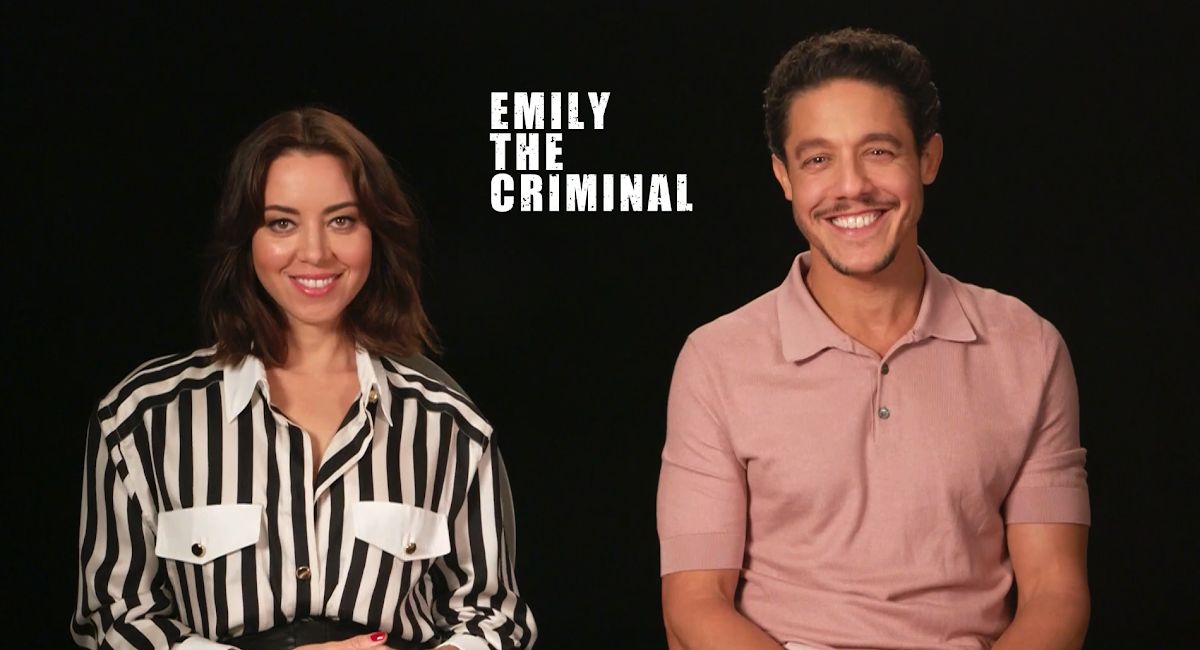 (L to R) Aubrey Plaza and Theo Rossi for 'Emily the Criminal.'

You can read our full interview below or click on the video played above to watch our interviews with Plaza, Rossi, and writer/director John Patton Ford.

Moviefone: To begin with, Aubrey, what was your first reaction when you read the screenplay, and what were some of the aspects of Emily’s personality that you were excited to explore in this movie?

Then the character, I just found her so relatable in so many ways. I just loved the idea of playing that type of person and drawing upon those kinds of experiences of just being a fish out of water, and just trying to make it in a world that makes it so hard.

MF: Theo, how would you describe Youcef in your own words, and what did you want to bring to the character as an actor?

Theo Rossi: I think that what I love about Youcef is that we're all just trying to figure out who we are, no matter how old we are, no matter where we're getting, we're just discovering ourselves every day. Sometimes people come in that make you find something else about yourself that you didn't know.

I think that we're also sometimes doing things that we might not necessarily want to be doing, but we're thrust into it. Youcef just happens to be in a, for lack of a better word, family business, but he has bigger dreams. It isn't until the interruption in a way, or the chance meeting of someone like Emily, that reveals who he truly is.

(L to R) Theo Rossi and Aubrey Plaza in 'Emily the Criminal.'

I just love that because it's so similar to life, right? We don't know, we meet people, we work with people, we hang around people and it reveals something else about us. We start to see the stuff with his mom and who he really is. I just loved the humanization of him, because you think he's one person in the beginning and then he’s someone else.

That to me is why I go to the movies. I want to see characters grow. I want to see the journey that they take me on, and the ride that they go on. I think it's amazing to see Emily and her story play out. It's incredible.

MF: Finally, Aubrey, Emily is really torn between two worlds. There is the world of legitimate society that she wants to be a part of, but also the criminal underworld, which she is drawn to.

At a certain point, she has to make a clear decision which world she is going to be a part of. Can you talk about the predicament she finds herself in and how she comes to make that decision?

AP: There's a very clear moment in the script and the movie where she is kind of confronted with this fork in the road and she has a decision to make. I think it's obvious to her when it happens. The system is broken and she's just not willing to play that game anymore. Nowadays, I think a lot of people can relate to that. It's a catch-22. It's just a broken system.

What's so interesting about that point in the movie is that she has kind of come into herself. She finds herself being a boss in a way, but just not in the way that she thought she would be, or that is kind of expected or traditional in an office with a suit on. But she is a boss. She gets her power, but she just uses it in a different way than most people decide to use it.

Aubrey Plaza in 'Emily the Criminal.'