The British writer/director talks about making an apocalyptic black comedy set at Christmas. 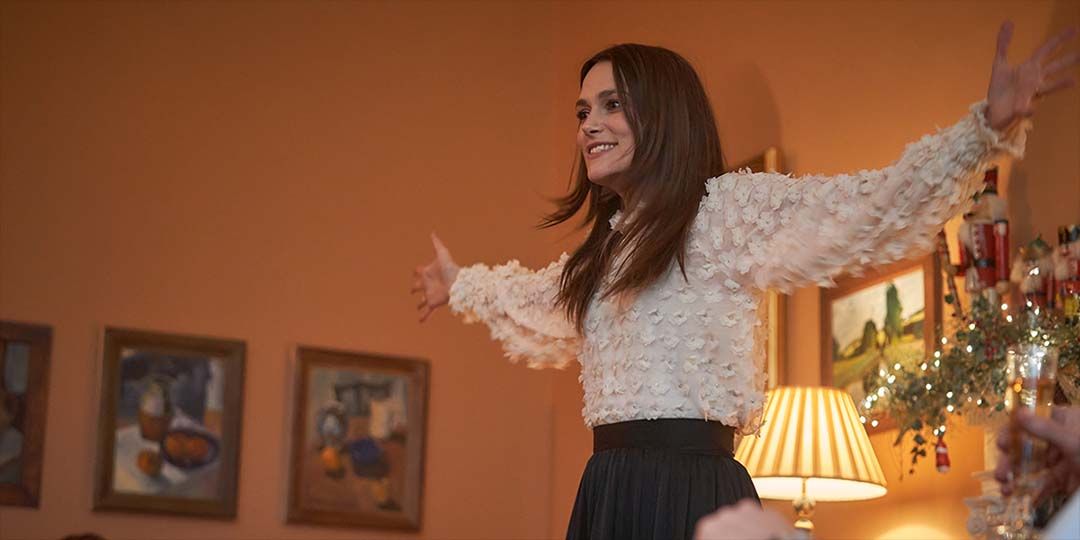 As friends and family gather on Christmas Eve tensions rise - but not for the usual reasons. It’s slowly revealed that the end of society as we know it is nigh. As a poisonous cloud descends upon the United Kingdom, petty differences are worked through, grievances are aired, and despite it all, love remains all around them.

Griffin sat down with Moviefone ahead of the gala presentation of ‘Silent Night’ at the Toronto International Film Festival.

Moviefone: How did you first decide to combine a holiday film with an apocalypse film?

Camille Griffin: First of all, I'm the annoying person at a dinner party who wants to talk about real things, and I get on people's nerves, because I'm not talking about nonsense. And I've noticed that a lot of people don't have the tolerance or the energy to always have big, dramatic conversations. And I don't mind having a polite argument or something and then like having a drink. I like having difficult conversations. But I know that a lot of people don't. So that, for me, is why I tried to make a comedy because I wanted to talk about important things, but make it entertaining, and not lecture or be a bore. I thought if I have a load of great actors playing great characters and great dialogue and funny moments, then I can maybe get some important points across. I just wanted to ask questions with the film. I'm not trying to give the answers obviously, you can obviously have a clue and insight into my political values. I sound very middle class, I was brought up middle class.

I used to get very sentimental at Christmas. You miss the people you haven't spoken to, your friends that you've fallen out with, or your family. That dodgy brother or sister who annoys you. There's a sentimentality about Christmas, and relationships and friendship. And I think as I've got maybe weller, emotionally and psychologically older, I've become less sentimental. But there's something so profoundly powerful about the sentimentality of Christmas, and how we want to be with your loved ones and friends and family.

Griffin: Matthew Vaughn, who was my original producer, and still producer, but then he brought on Celine Rattray and Trudie Styler. Matthew is a great entrepreneur. Other than being a filmmaker and producer, he has his hands in many creative pockets. He was tinkering on his piano and came up with this Christmas song. He took it to Gary Barlow, from Take That. He's an amazing songwriter. They've written songs before, and they came up with this. Our composer Lorne Balfe, he only admitted to me last minute that he also worked on the song.

Matthew said we need to shoot a beginning where they're all on their way. I said, so they can play your Christmas song? And he said yes. So then the song had to then be brought into the film and became part of the storytelling. But it didn't originate from me, and it didn't originate from my film, but I did take the song. And I love that you notice that it has an unusual usage. He asked who do you want to sing it? I said, it's got to be Michael Bublé, Michael Bublé is Mr. Christmas, you know? And then he was like, I've got Michael Bublé!. I said we have to integrate throughout the film.

MF: How did you cast this large ensemble? Did you have any of them in mind when you were writing?

Griffin: I thought I was going to make the film for no money. Because I have been writing screenplays for an awful long time. So I came back from ‘Jojo Rabbit’ because my son was in ‘Jojo Rabbit’. And I saw Taika [Waititi] using comedy. And I thought, God he’s very clever to use this comedy idea. I'm going to use comedy, I'm going to write comedy. I'm going to write a really dark comedy, because all my stories were kind of melancholic and challenging. And I thought, okay, I can use comedy that's going to make it so much better. Or when I make my movie, that's a very rich person I know for money. And I went to Matthew Vaughn for advice. And he said, I'll make your film. I'd written it for my friends who are actors, because I used to be a camera assistant for many years. I've worked in the industry for a long time, and I've accumulated friendships with some actors. I wrote it for people who are my age. One of the first things Matthew said was, Oh, we got to cast much younger, we're old Camille. It really hit me, hearing him say we're old, actually really hit me because I've never had a problem with age. I have to be honest, I didn't write the film for that cast, because I wrote the film for a much older cast.

But as soon as he had that conversation, I was like, okay, well, wouldn't it be amazing to have Keira Knightley play Nell? Wouldn’t that'd be fun, like, this whole kind of Working Title beginning and the idea of perfection and Christmas happiness. And I was like, we've got to get Keira. She’s Miss Perfection and sweet. Audiences think of her as like the perfect British jewel. We had a causal conversation right at the beginning of our development process, then months later he said Keira Knightley had read the script and wanted to talk to me. So it all starts with Keira, and she loved it. We had an amazing conversation on the phone, then we met in person and I fell in love with her. And then people wanted to work with Keira, but we were very careful with who we cast because everyone in the film is a version of who I'd written it for originally, if that makes sense.

They're exceptional. There isn't one person that I'm not so grateful to because they were really up for playing. They were up for being extreme. They were all up for trying things that weren't comfortable. I was so lucky. I had to cut a few times because I couldn't stop laughing. I couldn't believe they had this endless pit of delivering brilliant performances.

MF: Keira’s boys in the film are played by your sons. How did you decide to cast them?

Griffin: So the three boys are mine and Davida McKenzie is a friend of ours. She's Thomasin McKenzie's little sister. The boys had become close to her on ‘Jojo Rabbit’. It wasn't that I just wanted to cast my kids, I obviously wrote the part from Roman and Roman and I had been on a long journey together with him wanting to act way before ‘Jojo’, and thank God for ‘Jojo’ it changed his life. But I knew that the kids were going to be part of a big gang of actors, and that the characters were going to be subjected to a certain amount of trauma. We did meet some kids because Davida lives in New Zealand, she's bloody miles away. I kept saying, I want Davida, but she's in New Zealand, we can't afford to bring her over. We did audition other actresses, but they just didn't have what she had. The kid needs to feel safe, because she's bullied through the whole film, and if she's got her friends, Roman, Gilby and Hardy, they're all friends, she’ll feel safe.

Also, I don't want to kill other people's kids, I'd rather pretend kill my kids. They're going to be fine because they know it's a conversation, it’s a metaphor. But I didn't want to do the same to someone else’s child, who then didn't feel safe. My kids and I had these, we have quite an extreme family, we're quite volatile and passionate and loving. So I just thought it'd be safer for them as children if they were my children and our friend.

MF: What do you hope people feel after they've walked away from this film?

Griffin: I don't want to hurt anyone because I know the film is upsetting. I've cried a lot myself through the film, because I care about those characters. They're also very dysfunctional characters, they’re very flawed characters, but I cared about them because they became real. I think we all believe that there should be a slight trigger warning in the film. I don't want the audience to be angry or hurt, which is why it's important that they're not tricked. I’m very grateful there's a slight warning that, you know, it's a dark comedy, and there's death in it.

I do want people to think, you know, how do we treat our younger generation? Do we allow them to ask questions? Do we listen to them? Do we allow them to challenge us? They're going to have to inherit a damaged planet, they're going to have to inherit a damaged society. I also think, fundamentally, do we give a shit about each other? Like, I care? Am I doing enough? I'm not doing that much, because I've got three kids to look after. And if I think I'd like to leave the world a better place, but I’m feeding and cooking and helping them. But because I think okay, well, I want to be a filmmaker, and I’ve wanted to be a filmmaker since I was a young child. So maybe if I can ask the questions in cinema, and we can walk away and go, well, Jesus, that was hard, that wasn’t easy to watch. It’ll make us think, are we doing enough? Are we recycling enough? Are we paying enough taxes? Is our government making the right decisions? Are we getting vaccinated? Do we care about our neighbor? You know, how do we care about racism? Are we going to change our political view? The characters say, we should have voted Green. It's like, yeah, maybe we should all be voting Green. So I like to think that, you know, Trump’s gone now, thank God. But there's a lot of recovery from the mistakes my government has done and the American Government's, certainly. That's what I'm trying to achieve with the film.

MF: Could you recommend another female filmmaker that inspired you who readers should seek out?

Griffin: I think the interesting thing is there's a lot of women writers, there's a lot of women, cinematographers, there's a lot of women actors, and I think they’re all artists. Recently I’ve been recommending a film called ‘Polisse’, not because I'm saying it's one of my absolute favorite films, but because it's a film I saw at the Cannes Film Festival many years ago by a filmmaker called Maïwenn, who had been an actress. It was an extraordinarily powerful film about the French police system and children. And I remember just sobbing and sobbing and for weeks I was obsessed with her film and obsessed with her as a filmmaker. It's not easy. I don't have easy conversations. So if someone wants something fun to watch, they shouldn't watch that. But it's called ‘Polisse’ and it was breathtaking.

'Silent Night' premieres on September 16 as part of the Gala Presentation series at the Toronto International Film Festival this year.