Moviefone speaks with Jack Kilmer about 'Detective Knight: Independence.' "He shows up and he is Bruce Willis, and you know that," Kilmer said.

Opening in theaters, On Demand and digital January 20th, and on DVD and Blu-ray on February 28th is the new action movie ‘Detective Knight: Independence,’ which is the third and final film in the trilogy from writer/director Edward Drake (‘Breach’).

The son of actors Val Kilmer and Joanne Whalley, Jack Kilmer is probably best known for his roles in movies like ‘Palo Alto’ and ‘The Nice Guys,’ as well as recently voicing his father’s ‘Willow’ role in the Disney+revival series.

Moviefone recently had the pleasure of speaking with Jack Kilmer about his work on ‘Detective Knight: Independence,’ his inspiration for the character, the action sequences, working with Bruce Willis, Willow Shields and director Edward Drake, and what it was like playing his father’s role on Disney+’s ‘Willow.’ 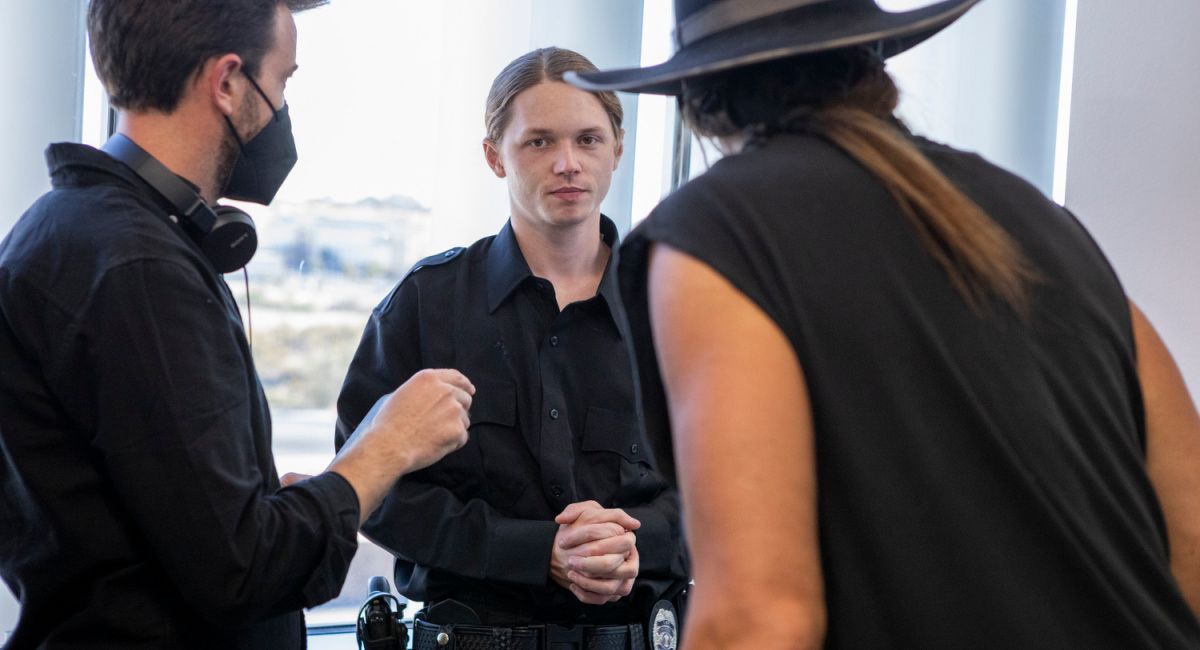 You can read our full interview below or click on the video player above to watch our interviews with Kilmer and Edward Drake about ‘Detective Knight: Independence Day.’

Moviefone: To begin with, can you talk about your character, Dezi and your inspiration for the role?

Jack Kilmer: Well, a movie we referenced a lot was ‘Joker.’ Dezi is this anti-hero vigilante. He echoes a lot of the incel people that are unfortunately around in this day and age. For me, it was things like ‘Taxi Driver,’ and ‘Bad Lieutenant.’ We had Bruce Willis, so when we started we had a superhero amongst us. We started in this superhero land, and then we took it and ran with it.

I was talking with Ed and we were like "This is a real opportunity to make something really gritty and real, and something a lot of people can relate to in this country right now." We just had the anniversary of January 6th. We even shot this movie not long after all of that stuff went down. We had tons of ideas about who this guy was and what American this guy was. Where do Americans go when they snap, when they lose their minds? What does that look like?

I don't know where he is politically, this character. I didn't align him with any particular political party. He consumes a lot of stuff on the internet, he's very paranoid, he's an outsider, and he is not accepted in society. I think a lot of people can at least relate to that. I don't think the film points one direction. You root for him, and he's an underdog in a way. Dezi is actually somewhat redeemable of a person and you get to watch him spiral and unravel.

You just root for him. The movie is from the perspective of the villain, which is unique. He's just a person that's really sick and suffering, and very paranoid, and you can see how along the way how gets there. What that brings up for me is that there's a lot of people in this country that I would love to sit down and talk with, no matter what political position they take. Sometimes it's good to unite, to come together even though you have different political views to someone else, and sit and talk to them because maybe you guys align on more than you think.

MF: Can you talk about Dezi's relationship with Ally and working with Willow Shields?

Jack Kilmer: Willow is lovely and an absolute pleasure to work with. She really brought it. There's a scene in the movie where we have a showdown with Mr. Bruce Willis and man, she brought it in that scene. For the character of Dezi, she's the light and the anchor of the whole movie. She brings all the humanity to Dezi.

JK: Well, he is a legend, and a boss, and a king. He shows up and he is Bruce Willis, and you know that.

MF: What did you learn from watching him work?

JK: Let me just say this. He could say anything, and it's so powerful and effective. I don't know where it comes from but the guy can deliver lines in an extremely powerful and effective way, and it's all in him. That “Bruce Willis” is just in him and everyone's energy changes when he's around, and that's a real thing. He's a real star and a real celebrity from a time when you could be a massive star. He is that.

I was thinking about that today, Gorillaz is one of my favorite bands and he was in the Gorillaz music video when I was in middle school. The length of his career and thinking about how huge a star from my generation and the '80s he is. I was like what? That's so crazy!

MF: Can you talk about the weapons training you had for the movie and what was the most challenging action sequence for you to shoot?

JK: As far as the gun training, we practiced the utmost safety around all of those weapons, even though they were already modified to be as safe as possible with plugged barrels and blank rounds. They were completely safe and looked after at all times. I grew up around guns in New Mexico, so I take that very seriously from shooting target practice with my dad. It was a lot of fun to just blast off rounds.

However, like we've been talking about, 2021 was a time in history that was very scary for a lot of people, so I didn't want to pick up a gun first thing in the morning. There's also some fun elements to that as well. The hardest thing for me on this shoot was just the way we shot the whole thing in eight days.

That was the hardest thing about this movie because it really was eight days. It was a full feature length shot in eight days. So we were doing five, six pages a day of the script. That was really hard, but their whole distribution method and their way of shooting these movies, it works somehow.

That's because they work really hard. Edward Drake, the director, it's really remarkable how the guy makes these movies. I've never seen anything like it. If he got a bigger budget, I can imagine he what he could do with that and it would be amazing because he's one of the most creative and hardworking people I've ever met.

MF: What’s it like shooting a movie in eight days and what was it like collaborating on this project with Edward Drake?

JK: On any set there's days where you feel the pressure and get stressed. It was only until after we had wrapped the movie that I talked to Ed, and he told me, “Okay, I really felt the pressure for that.” He held it down. Everyone held it down and just worked super hard.

MF: Finally, what was it like for you to join the cast of Disney+’s ‘Willow’ series voicing your father’s role from the original movie and working with Jake Kasdan on the project?

JK: It was so epic. I love ‘Willow.’ My parents met on ‘Willow.’ Jonathan Kasdan is obsessed with the fact that both my parents are in the movie. He's a lovely guy. We were emailing back and forth for a long time and he's just fascinated that I exist and that my mom's in the series. He just had so many questions for me.

My dad has health issues and basically, Jonathan was like, "Can you come help with some wild lines, and can you come help me with this in the edit?" I was like "Sure. I'll come and do that." But it ended up being really special because we just sat and talked about Madmartigan and the whole legacy and everything.