Moviefone speaks with David Harbour about 'Violent Night.' "This script had a unique blend of 'John Wick' action, which I have always wanted to do."

The new movie is basically Santa Claus in ‘Die Hard’ with elements of ‘Home Alone’ and ‘Bad Santa’ thrown in for good measure.

On Christmas Eve, when a wealthy family is held hostage in their home by mercenaries led by Mr. Scrooge (John Leguizamo), the real Santa Claus (David Harbour), who has lost the Christmas spirit must summon his strength to defeat the bad guys and save the family including a young girl named Trudy (Leah Brady), who still believes in the magic of Christmas and Santa Claus.

Moviefone recently had the pleasure of speaking with David Harbour about his work on ‘Violent Night,’ the unusual screenplay, his version of Santa Clause, and shooting the incredible action sequences. 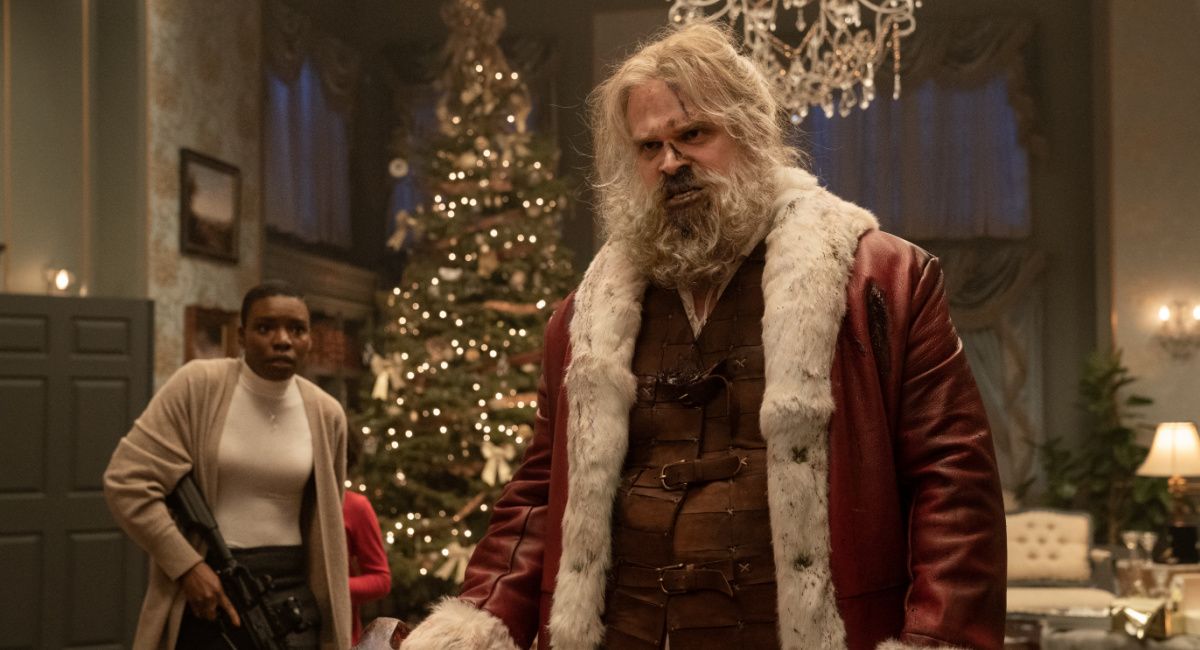 You can read our full interview with David Harbour below or click on the video player above to watch our interviews with Harbour, John Leguizamo, and director Tommy Wirkola.

Moviefone: To begin with, what was your first reaction this screenplay and it’s “Santa Claus in ‘Die Hard’” concept?

David Harbour: I mean, before they even gave me the script, they sort of pitched me the idea and I was initially like, "This is insane, no thank you.” They were like, "No, no, no. The director and the producer would really like to talk to you about it, and we'd really like to send you the script," and they did.

Tommy, the director, is this kind of childlike, Norwegian elfish weirdo who just loves Christmas, and David Leitch has done incredible action movies. They sent me this script and it had such a unique blend of this ‘John Wick’ action, which I love and have always wanted to do.

I saw Charlize Theron in ‘Atomic Blonde’ and I was like, "Oh, I want to be doing that. I want to be the guy doing the choreography.” On top of that, it's like ‘Miracle on 34th Street,’ where it really does have a Christmas heart beating at the center of it, about a little girl who wants to believe in Santa Claus. The fact that those two things were together, it was such a unique thing. I'd never seen it before, and I got really excited about it.

MF: What was your approach to playing this exaggerated version of Santa Claus?

DH: I mean, what I was curious about is we have this mythological figure that we lie to our kids about. We say he's real and he's delivering presents to you, which by the way, I think is fantastic. It's hilarious that we all just lie to children, I think it's great. But we don't really know much about him, except he's a big fat guy in a red suit who delivers presents to nice, and not to naughty kids.

So, I wanted to have the image of the “Coca-Cola Santa” in the beginning with the little glasses and the curly white beard, but then as the movie goes on, I wanted to see who's underneath that mask?

10,000 years ago, there was a guy in Christian mythology called St. Nicholas, who he's based on. There's other traditions, Germany has a guy called Weihnachtsmann, and different cultures have different versions of this guy. So, my interest was, who really is this guy? I think as the movie goes on, we sort of peel back that he wasn't always such a jolly, fat guy, that there's some complexity there, and that really interested me in going deep into who that guy was specifically.

MF: Finally, can you talk about your preparation for the action sequences and what it was like shooting those scenes?

DH: It was brutal and great. I mean, I have gotten into a little bit of the fight world through ‘Stranger Things,’ and through the Marvel series (‘Black Widow’ and the upcoming ‘Thunderbolts’), but I'd never done anything as intense as this.

The guys who did this are the stunt guys that do the ‘John Wick’ movies, which are known for their incredible action sequences. They trained me for a couple months in Jujutsu, and Greco-Roman wrestling, and I was working with a couple stunt guys who I got to know their rhythm very well.

But that choreography, it's just a lot of training. You're just training and tired all day long, but it's so exciting to be able to represent what that can be. It was a lot of fun, but it's really hard work. I mean, watching those fights on UFC and stuff, I have a newfound respect for the guys that do that discipline. It really is exhausting.

Every Christmas Episode of 'Friends,' Ranked