Moviefone speaks with director John Hamburg about his new Netflix movie. “I've worked in the ‘bromance’ space before. I guess it's one of my themes,” he said.

Premiering on Netflix beginning August 26th is the new comedy ‘Me Time’ from writer and director John Hamburg (‘Along Came Polly,’ ‘I Love You, Man’).

The movie stars Kevin Hart (‘DC League of Super Pets’) as Sonny, a stay-at-home dad who finds himself with some "me time" for the first time in years while his wife (Regina Hall) and kids are away.

He soon reconnects with his former best friend Huck (‘Father Stu’s Mark Wahlberg) for a wild weekend that nearly upends his life.

Moviefone recently had the pleasure of speaking to writer/director John Hamburg about his work on ‘Me Time,’ making a “bromance,” working with Hart and Wahlberg, Seal’s concert for the crew, working with a mountain lion, and the possibility of a sequel. 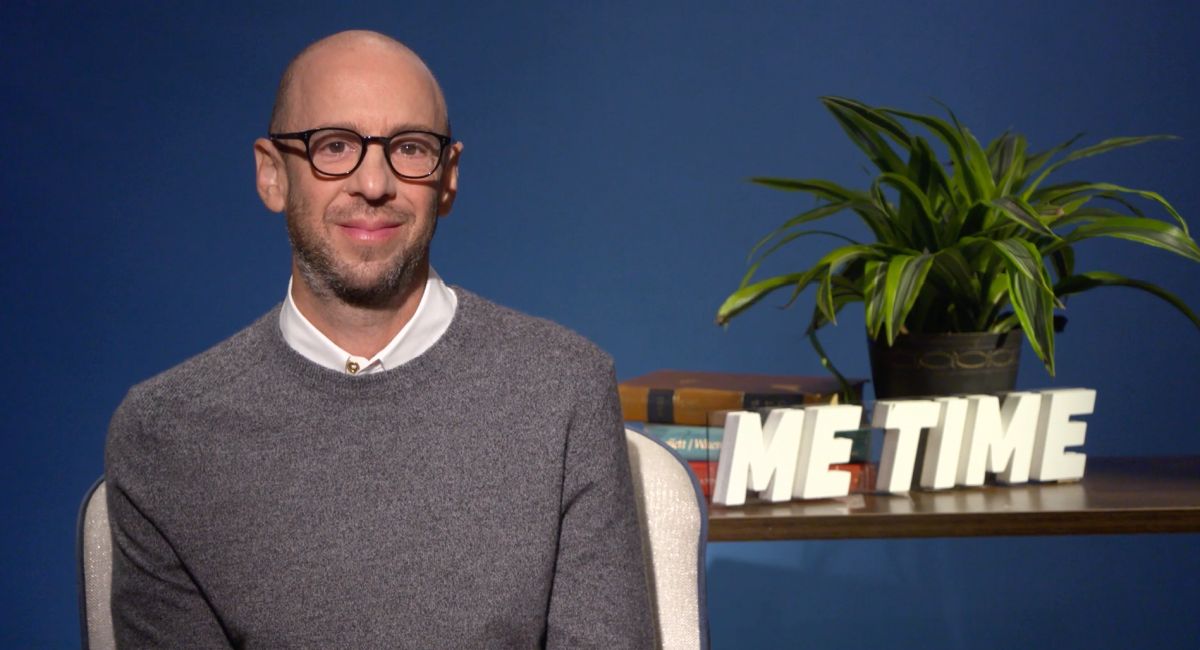 Moviefone: To begin with, how did you come up with the idea for this movie?

John Hamburg: One of our executive producers was telling me that he was alone without his family for the first time in a while. It's a moment as simple as that that gets my mind going and thinking, "Oh, maybe that's the premise for something."

MF: How often does that happen that you’ll take something that is not working in one project, and apply it to another project?

JH: It does happen because it's all part of a world of comedy, awkwardness and characters that I traffic in, so it definitely does. Sometimes I'll hear a story and years later, put that into a project. Or I'll put a project aside because I can't quite crack it or it's not quite working, but I'll take elements of that and put it into something that does come to fruition.

MF: The movie is very much a “bromantic comedy,” can you talk about the deep friendship between Sonny and Huck?

JH: I've worked in the bromance space before, and I guess it's one of my themes. They say filmmakers, sometimes you just make the same movie over and over again. They just look a little different. But I just wanted to tap into the idea that when you make different choices in life, it can pull people apart and really, you're not as far apart as you think you are. How does this friendship that has been put through the test come back together?

Because I had experienced it in my own life, making choices to start a family and settle down in a way, and I had other family members and friends who have made an entirely different choice. Often, I'd think, "Oh, they're doing something crazy right now, and I'm a little jealous." But they might be like, "I'm jealous that John just gets to hang out at home and watch TV with his family." So, it's interesting. I was trying to tap into those dynamics in writing this relationship between Sonny and Huck.

(L to R) Kevin Hart as Sonny, director John Hamburg, and Mark Wahlberg as Huck on the set of 'Me Time.' Cr. Saeed Adyani/Netflix © 2022.

MF: Can you talk about working with Kevin Hart and Mark Wahlberg, and their chemistry on and off screen?

JH: Kevin and I had worked with each other before, but never when he was the global movie star that he is now. I worked a bit on the script of his movie ‘Night School,’ but I wasn't the director. Kevin is the funniest human on the planet and also just a great person. He’s fun to work with, brings so much energy, and has so much creativity.

Then Mark, I hadn't known. We hadn't worked together, so I didn't know what he'd be like. He is, first of all, incredibly professional. He truly takes the craft of acting seriously. He knows the script cold, knows things that I'd cut from previous drafts and would bring them back in, and also just sneakily very funny. That combination is lethal. Then the two of them just got along incredibly well, which made my job as a director much easier.

JH: I was trying to write about a modern relationship. I observed so many of these where the wife was the breadwinner and had a big career, and the husband chose to stay at home, or maybe sometimes didn't choose. Maybe it was like, "My wife is killing it, and someone's got to take care of the kids." So, I was aiming to write about that.

Then, I had seen some men in my life who made that choice and were completely at peace with it, but that wouldn't give me a comedy. I'd seen other people who made that choice, but clearly were a little bit insecure and not quite sure. They're falling into old-school gender dynamics, and I was trying to approach that.

Insecurity, to me, is one of the through lines in all of my comedies. A character who's insecure is going to make a lot of bad choices. Thus, Kevin's character is insecure, and he overcompensates. He does so many stupid things that come from that one thing, which is if he could just take a breath, relax and know he’s doing fine, everything would be fine. But of course, we wouldn't have the movie ‘Me Time’ in that case.

MF: Mow did you get Seal to appear in the movie?

JH: So, I am a big Seal fan. I mean, he's a great musician, and he has one of the great voices of all time. Kevin's character was a singer-songwriter named Dr. Silk, and so it was like, "Who would this character have revered when he was coming up? Seal. That makes sense."

Seal is so iconic, and so larger than life. I mean physically he's a very tall, extremely handsome man. So, Kevin's character would love this guy and he would be one of his idols. Then also, it would be really fun to have Seal, this larger-than-life figure, in Kevin's suburban backyard. That was the combination.

Thankfully, we had a great conversation over the phone when he was on tour in England. I talked him through it, and he was down, and he was awesome. He was so great on the set. He was funny, and fun. When he was doing that concert, all the actors were just in awe. He stayed, and he did an acapella version of “Crazy” after the cameras stopped rolling just to entertain the crowd. It was one of my great days filming in my career.

MF: In the film, Sonny and Huck go on several adventures including skydiving and fighting a mountain lion. What was the most challenging sequence to shoot?

JH: Good question. The mountain lion was the most challenging because you have some real animals who don't cooperate that well usually. You have a really hot, dusty location. A lot of it was CGI, and I hadn't had a ton of experience doing this kind of sequence. So, I'm smart enough to know what I don't know.

I relied on experts to tell me, "I know Kevin is wrestling with a blue stuffed animal. But this is going to look real. Trust us." You have to have faith, put all these components together and hope that at the end it's going to look seamless to the audience, and all they'll see is Kevin Hart running from a mountain lion.

MF: Finally, can you see possibly revisiting these characters in the future and exploring their relationship further in a sequel?