Welcome to Female Filmmakers in Focus, featuring recommendations for films directed by women to seek out each week. This week, Liz Garbus talks about her latest doc ‘Becoming Cousteau’ and recommends the films of Barbara Kopple and Jane Campion. 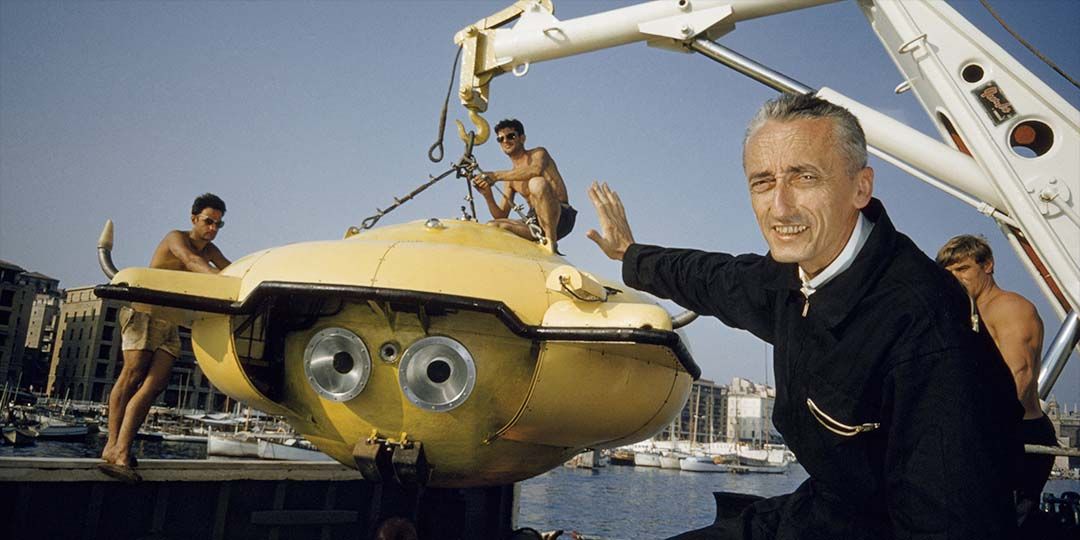 Born and raised in New York City, Liz Garbus attended Brown University where she graduated magna cum laude with a bachelor's degree in history and semiotics. After taking some video courses and filming a short documentary while at Brown, Garbus interned at Miramax films where she began working with filmmaker Jonathan Stack. Their film ‘The Farm: Angola, USA’ was nominated for an Academy Award for Best Documentary. Raised by a social worker and an attorney (“superlawyer” Martin Garbus), much of Garbus’ work focuses on issues of inequality and injustice, as well as explorations of identity and history. Her prolific career, which spans feature films, short docs, and television, includes dozens of directing credits and over 50 producing credits. In 2007 her film ‘Ghosts of Abu Ghraib’ won an Emmy for Outstanding Non-Fiction Special. She received a second Oscar nomination for her 2015 film ‘What Happened, Miss Simone?’ about singer and civil rights activist Nina Simone. Other notable recent projects include the miniseries adaptation of ‘I'll Be Gone in the Dark’ following writer Michelle McNamara’s quest to catch the Golden State Killer, and ‘All In: The Fight for Democracy’ a piercing look at the activists fighting against rampant voter suppression.

Using extensive archival footage and first hand accounts, her most recent project ‘Becoming Cousteau’ traces the life and career of famed explorer, filmmaker, innovator, scientist, photographer, author, researcher and conservationist Jacques Cousteau. The film deftly uses Cousteau’s own journey from adventurer to activist to shine a light on how society’s current obsession with the sea must translate into direct action to save it. ‘Becoming Cousteau’ paints a complex portrait of a passionate, yet enigmatic man, and acts as a rallying call to arms to continue his legacy of conservation before it’s too late.

‘Becoming Cousteau’ is in theaters now.

Liz Garbus spoke to Moviefone before the film’s presentation at the Toronto International Film Festival in September.

Moviefone: Your documentaries cover a diverse array of subjects. How did you decide on making a film about Cousteau?

Liz Garbus: This was inspired by a night when I was reading a book to my young son about the undersea world and discovery. Cousteau, of course, was mentioned. It just brought to me these incredibly warm, fuzzy recollections of my childhood watching his TV show. Then it also made me realize that he was being lost to a new generation, even though they had been influenced by the imagery he had brought into their living rooms, with modern underwater programming and shark weeks. It’s all owed to Cousteau’s early work. So I began to dig deeper into his life's journey. His message around conservation felt incredibly timely and important to discuss at this moment.

MF: This documentary uses a lot of archival footage. What was that process like?

Garbus: We had 500 hours to pour through. There were two stages there. One is the listening stage where my team and I were listening to his interviews, his narrative of his own life, trying to identify what are the important milestones in his own view. The next stage was talking to folks who knew him well, for that perspective. Then we organized a wish list of visual events in his life. For instance, he talks about the effect of World War II, and we were able to uncover footage of him diving to recover the corpse of a dead soldier. He talks about his early missteps in the way he interacted with animals and the undersea world. In exploring that we came to understand what his art was. It's really a redemption tale so we looked at the archive with that in mind.

Garbus: That was certainly a challenge. I've certainly dealt with subjects or made films about subjects who were much more introspective. But in many ways, I wanted to respect that. He does talk about his flaws. He talks about his failure as a father and husband. He talks about his guilt about having interacted with animals and nature in the way he did in the early part of his career. So it's not fair to say he never sort of looked into himself, but certainly by the third act of his life, and the third act of the film, he is not interested in signing autographs and being a celebrity. He's interested in action to protect the oceans.

MF: When he launched his first TV show they didn’t know if they should sell him as a scientist, researcher, philosopher, inventor, or explorer. How did you decide how much of each facet of him to show?

Garbus: I think in his early life, it was really this hubristic notion of the male conqueror that dominated his identity. We must go further, we must go deeper. These were his mantras. We must go and see for ourselves. These were the things that he talks about, as his early mantras. Then as time goes on, he becomes less of that explorer and more into the realm of protector, and really siren for the peril that he was seeing. He was feeling the warming ocean temperatures against his skin. He was seeing the degradation of reefs as he had been documenting over decades. It's really that evolution from adventure and explorer to caretaker. Of course he still led a very dynamic life, and you could focus on any one of those elements for much, much longer. But his journey from hubris to nurturer was the one that I felt was really important for kind of a metaphor for today, for where we as a society need to do.

MF: Can you talk a bit about his first wife Simone Melchior and how you decided how much of her to put into the film?

Garbus: She was a total surprise to me during the research. I found her to be a delicious character, salty and headstrong. They called her "La Bergère", the Shepherdess, the one keeping all the herd from going over the edge. Her son says she was on The Calypso more than anybody holding everything together. I loved reading her journals. She writes, “I don't have blood in my veins, I have salt water.” Her love affair with the sea was very, very pure. For a woman of her generation, the only way she could live a life on the sea was to marry a sailor, or marry somebody as dedicated to the sea as she was. This is how they made this match.

MF: Cousteau was so popular in the 60s and 70s, but I don't know that his films or the TV shows are really even available.

Garbus: You're right, they're really not. Given the kind of technology we have now for showing children and adults what lies under the sea, they feel antiquated. I think what I was trying to do in this film was express the kind of magicalness of what it felt like to see them for the first time with a global audience back then. One of the things that I wasn't really aware of is what an extraordinary filmmaker he was. I think so many of us grew up with this TV show, but his film ‘World Without Sun’, is really just a gorgeous piece of filmmaking. So I do think that they're worth revisiting.

MF: How do you think Cousteau’s legacy is reflected in current underwater entertainment?

Garbus: His early work expresses a total love for the magic of the undersea world. He says you will only protect what you love. Which I think is certainly very true. I think that the idea that we might fall in love with the undersea world and therefore be more committed to taking steps to protect it is a very valid one. Underwater documentaries further our love for this world, then perhaps there's some good, we just have not seen the connection between that love and actual action. Individuals may have paper straws and not throw their plastic into the water, etc., but we are in such a massive problem that it goes beyond individual action. It’s about government regulation and action. That's the missing piece.

MF: How do you hope audiences feel after they’ve watched your film?

Garbus: I hope they feel angry that for decades that they've had these blank checks on their shoulders as their homes get flooded, or they see wildfires and how climate change is accelerating before our very eyes. But I also hope they feel the love and the wonder that connects us to this planet and wants us to elect people who are committed to protecting it.

MF: Are there any women whose films who inspired you to go into filmmaking or just that you love and think other people should seek out?

Garbus: There are so many! In the world of documentary, Barbara Kopple was the O.G. and is the O.G. ‘Harlan County USA.’ and ‘American Dream’ were extremely influential for me. Also, I gotta say my brain is all Jane Campion at the moment as I just saw her latest film ‘The Power of the Dog’ and all I can think about is my desire to see that film again. I want to watch it and find all the details I know I missed the first time. She's just such an extraordinary master and has been doing this at a high level for so long and with both drama and beauty. Those are two people who I certainly have been thinking a lot about.

Pioneering documentarian Barbara Kopple has won two Academy Awards for her work. The first was for her 1976 film ‘Harlan County, USA,’ which covers the 1973 Brookside Strike. Kopple follows 180 coal miners and their wives as they fight for fair treatment from the Duke Power Company-owned Eastover Coal Company's Brookside Mine. She won her second Oscar for 1990 film ‘American Dream,’ which follows the unsuccessful 1985–86 strike against the Hormel Foods corporation. As we see a rise in labor strikes across the United States, both films remain as relevant as ever.

‘The Power of the Dog’ - directed by Jane Campion

Benedict Cumberbatch and Jesse Plemons in 'The Power of the Dog,' directed by Jane Campion

New Zealand filmmaker Jane Campion was only the second ever woman to be nominated for Best Director at the Academy Awards for her 1993 film ‘The Piano,’ which was also the first film directed by a woman to garner nominations in both directing and best picture categories. Also for that film, she became the first woman to receive the Palme d'Or award at the Cannes Film Festival, with Julia Ducournau’s win this year for ‘Titane’ making her only the second woman ever to receive the honor. Campion went on to win the Best Original Screenplay for her work on ‘The Piano’. Her most recent film ‘The Power of the Dog’ has been playing the fall festival circuit since its world premiere at the 78th Venice International Film Festival. Adapted from the novel of the same name by Thomas Savage, the hypnotic western stars Benedict Cumberbatch, Kirsten Dunst, Jesse Plemons, and Kodi Smit-McPhee, and is set to premiere in select theaters on November 17th and on Netflix on December 1st.