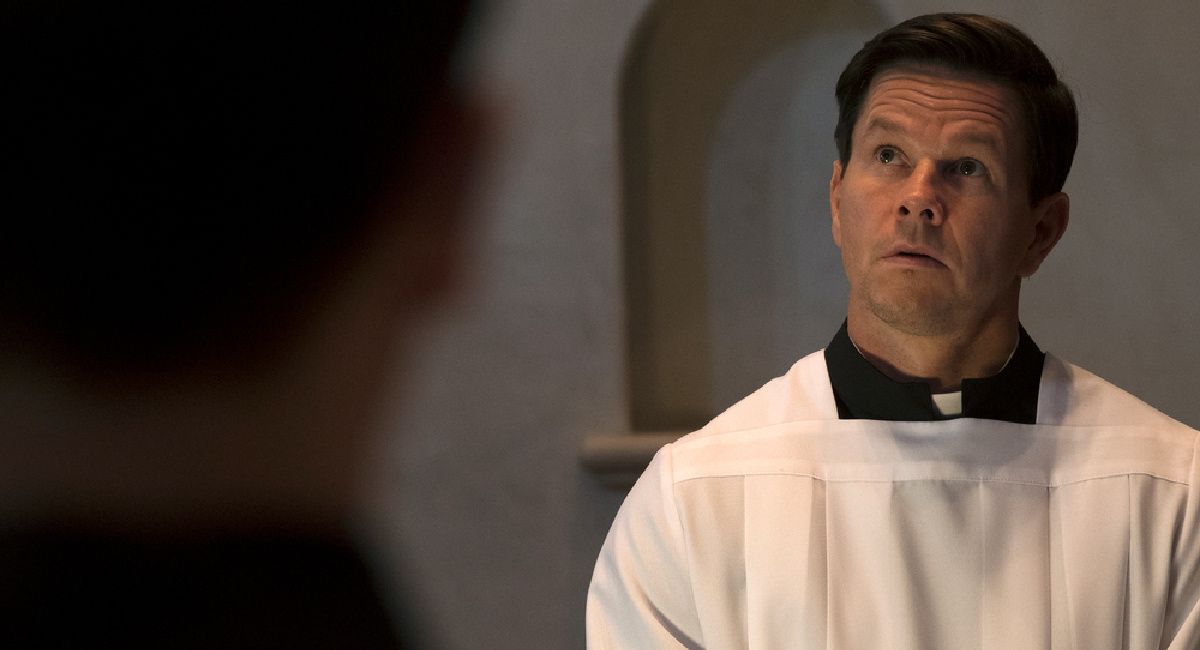 Opening in theaters on April 13th is the new movie ‘Father Stu,’ which marks the directorial debut of Rosalind Ross. Based on a true story, the film stars Mark Wahlberg as Stuart Long, a boxer-turned-actor who decides to become a priest and is then diagnosed with inclusion body myositis.

In addition to Wahlberg, the cast also includes Jacki Weaver, Mel Gibson, Malcolm McDowell, and Teresa Ruiz. The result is a surprisingly well-made and touching faith-based film, that never forces the faith on you, and is grounded by Mark Wahlberg’s strong and dedicated performance.

The movie begins by introducing us to Stu Long (Wahlberg), an over-the-hill boxer on the verge of retirement. Not sure what to do next, Stu moves to Hollywood to become an actor. While auditioning for projects, Stu gets a job working as a butcher, and soon meets Carmen (Ruiz). Smitten with her, he joins her church in hopes of getting to know her. However, Carmen makes it clear that she only dates Catholics. So, Stu decides to get baptized and join the church.

Stu and Carmen soon fall in love but are challenged when Stu has a terrible motorcycle accident. Stu believes that God saved his life, and in a surprising and difficult decision, he decides to become a priest. Neither Carmen, Stu’s mother Kathleen (Weaver), or his estranged father Bill (Gibson) understand his choice and all three try to convince Stu to change his mind.

He joins the seminary but soon discovers he has IDM, a rare muscle disease. Now, against the odds, Stu will have to his fight for his life while working towards his goal of serving God and becoming a priest.

Mark Wahlberg famously played a boxer once before in director David O. Russell’s brilliant ‘The Fighter,’ which was also based on a true story. While ‘Father Stu’ isn’t quite on the same level as ‘The Fighter,’ it was surprisingly good and an enjoyable watch.

Wahlberg is clearly dedicated to the role and transforms himself physically several times throughout the film. But his personality also fits the character of Stu perfectly. Stu is optimistic, charismatic, and a dreamer full of energy, boxes that Wahlberg’s persona all check. But the actor is also a devout Catholic and brings that reverence for the church to his performance.

Actress Teresa Ruiz gives a very good performance as Carmen and has great chemistry with Wahlberg. You can understand why Stu falls for her and goes to such great lengths for her love. As an audience, we begin to root for them as a couple, which is why it’s so devastating when Stu tells her he’s joining the seminary, and you can see the pain on Carmen’s face.

Actress Jacki Weaver seems to have a lock on playing worried mothers after her Oscar nominated roles in ‘Animal Kingdom’ and ‘Silver Linings Playbook,’ and gives another strong performance as Stu’s concerned mom. Kathleen Long has a very close relationship to her son, having raised him herself, and you can see that clearly in Weaver’s scenes with Wahlberg as the two have a very playful on-screen chemistry.

Mel Gibson plays Bill Long, Stu’s estranged and abusive father. He’s not a likable character yet Gibson plays it well, adding humanity where he can in the form of remorse for his past actions. He has some strong scenes with Wahlberg, and you can see where Stu’s anger and rage comes from. The character also has a nice redemption arc, as seen in a tender moment with Weaver at the film’s conclusion.

Writer and director Rosalind Ross has delivered a strong debut film, however the movie is not without its faults. Some of the pacing is off, especially in the first half as it takes almost an hour before Stu even attends a church service. I understand that we need to set up the character and his life before Carmen and the church, but a lot of time was spent on his fledgling acting career, which didn’t seem important to the film and its overall themes.

In the end, ‘Father Stu’ works because of its inspiring true story and Mark Wahlberg’s strong performance. The themes of faith are respectfully explored, and the movie makes for touching and entertaining viewing.