Zoe Kazan and Carey Mulligan play the lead reports on the real-life New York Times investigation into the producer’s history of sexual misconduct. 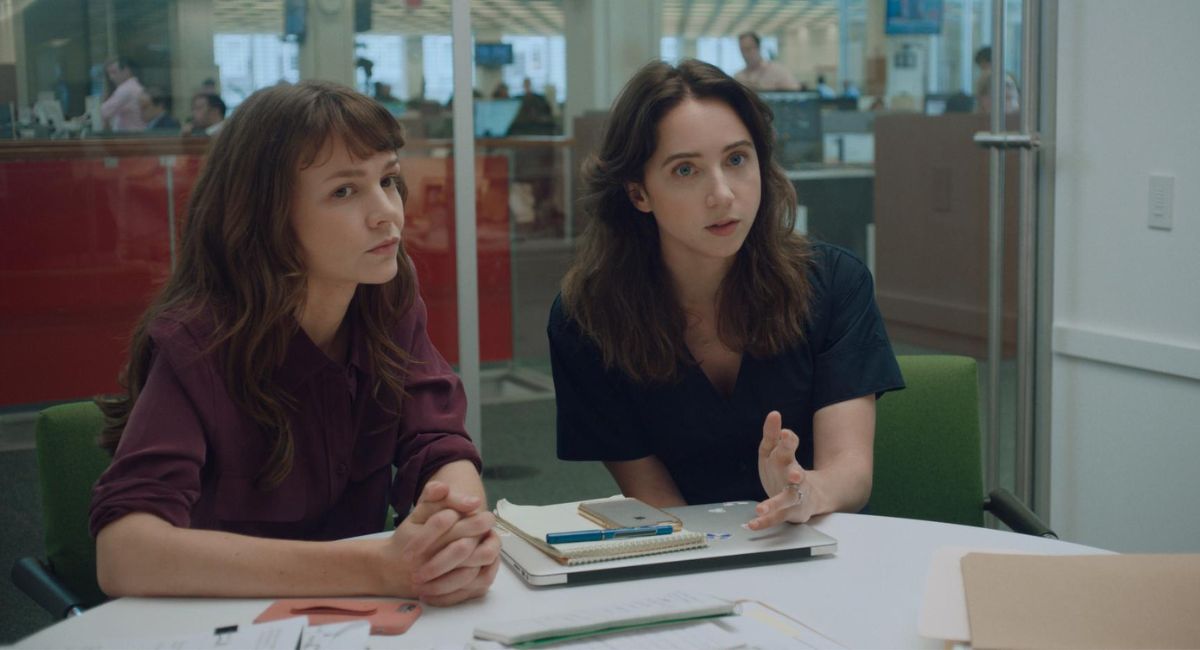 (L to R) Carey Mulligan and Zoe Kazan in 'She Said,' directed by Maria Schrader.

One of the toughest genres of movie to get right is the based-on-truth investigative dig into a big story. It’s not just that reporters hunched over keyboards or waiting for phones to ring can be singularly uncinematic, more that the heaviest hitters in the field – ‘All the President’s Men’, for example, or ‘Spotlight’ – boast a compelling subject, watchable performers as the dogged journalists and belief in the need for such work.

Fortunately, ‘She Said’ has all three. And if it doesn’t quite match those bastions of the form, then it certainly offers a hard-hitting, emotional and difficult probe into a world where too many people kept horrifying actions quiet for too long, with a variety of women’s lives and careers either destroyed or profoundly affected.

Directed by Maria Schrader (‘I’m Your Man’) and written by Rebecca Lenkiewicz (‘Disobedience’, ‘Colette’), ‘She Said’ follows the real-life investigation by New York Times journalists Jodi Kantor and Megan Twohey into the Harvey Weinstein sexual misconduct story, a bombshell piece which detailed a tapestry of allegations against the powerhouse producer, helped launch the #MeToo movement and assisted in sending Weinstein to prison for his actions.

Originally tipped off by accusations made by actress Rose McGowan (played in voice form only here by Keilly McQuail), Kantor and then Twohey began to peel the toxic onion of Weinstein’s world, revealing any number of accusations of gross sexual and abusive behavior towards subordinates, actresses and others.

(L to R) Zoe Kazan and Carey Mulligan in 'She Said,' directed by Maria Schrader.

It’s a painful subject to bring to life and Schrader never shies from showing the effect it had on everyone who was affected – at least, those who would go on the record initially. The trickiest aspect was finding sources who would agree to be quoted, since Miramax and others and arranged settlements with a number of victims that included strict gagging orders.

With dogged determination, the two reporters (aided by senior journalist Rebecca Corbett) dug away at the cone of silence, finding people – including Ashley Judd, who plays herself – willing to let their names be used in the initial piece.

Lenkiewicz, meanwhile, adapts the book that the three reporters wrote documenting their work, carefully charting the wide-ranging investigation that ended up taking them to London, Wales, Silicon Valley and beyond in search of reliable and willing witnesses and victims.

Kazan brings a quietly persistent flavor to Kantor, a seemingly unassuming woman who held the line even when threatened and followed. Likewise, Mulligan imbues Twohey with a world-weariness drawn from previous years covering scandals; she’s introduced on the trail of accusations against Donald Trump during the 2016 election year. There are death and rape threats randomly flooding her phone and conversations with the subject himself rife with threats of legal action and poisonous personal attacks.

Both of the leads are excellent, pushing the narrative along without flashy drama. These are complicated, driven women with the backbone to keep following the truth despite incredible pressure and resistance. Patricia Clarkson, for her part, makes the smaller role of Corbett into a mentor and colleague to be admired.

Around them, Schrader has built a supporting ensemble that shines almost to the same level – Jennifer Ehle will break your heart as Laura Madden, one of Weinstein’s victims who agrees to share her story even as she’s preparing to undergo major surgery. Andre Braugher brings gravelly power to Times executive editor Dean Baquet, snapping down the phone to recalcitrant lawyers and executives, and keeping his colleagues on the right track. And there are the various former studio workers and other victims who are quietly nudged into offering up their accounts or checking facts even if they won’t speak publicly.

Lest you think that it’s a grinding trudge through fetid soup, there are the moments of triumph, the calls to let Kantor or Twohey know that someone is willing to speak. Finding documents to back up the accusations. The reporters’ family lives also help to balance out the bleakness, moments of joy – but leavened with real-life challenges – as they dig ever deeper.

And though Weinstein is the subject here, he’s more a shadowy presence, heard over phones and glimpsed from behind when arriving at the Times office with his legal team to hammer out a statement to add to the story shortly before it’s published.

‘She Said’ is the sort of important story that it’s vital to get right. Tone is everything, and while Schrader sometimes lets the momentum lag, it’s almost always gripping. There is a measured feel to the movie that pushes it beyond feeling like someone is simply reading a Wikipedia entry about the investigation to you while you’re trapped in your chair.

And though not every scene of the journalists pouring through pages or squinting at screens to make sure the facts are straight work as well as the door-knocking encounters with former Weinstein assistants whose pain is written across their face, it doesn’t dilute what ‘She Said’ has to offer. True, a few scenes could easily have been snipped (we’re not sure we needed to have Kantor and Twohey show up at Gwyneth Paltrow’s beautiful home for a conversation we never get to watch) and there are flashbacks that flip between powerful and filler, but the whole holds together beautifully and the result is an urgent, engrossing look at the positive impact that good, professional journalism can have on the world, which is something more relevant than ever.

Given the extensive coverage – sadly, this is a story as old as time and one in which the revelations, far beyond Weinstein, will just keep arriving – it would be easy to think that you already know what happened. ‘She Said’ is here to assure you, with heartbreaking authority, that you most definitely do not.

Cast of 'She Said,' directed by Maria Schrader.

New York Times reporters Megan Twohey and Jodi Kantor break one of the most important stories in a generation — a story that helped launch the #MeToo movement... Read the Plot