Dual of the fates. 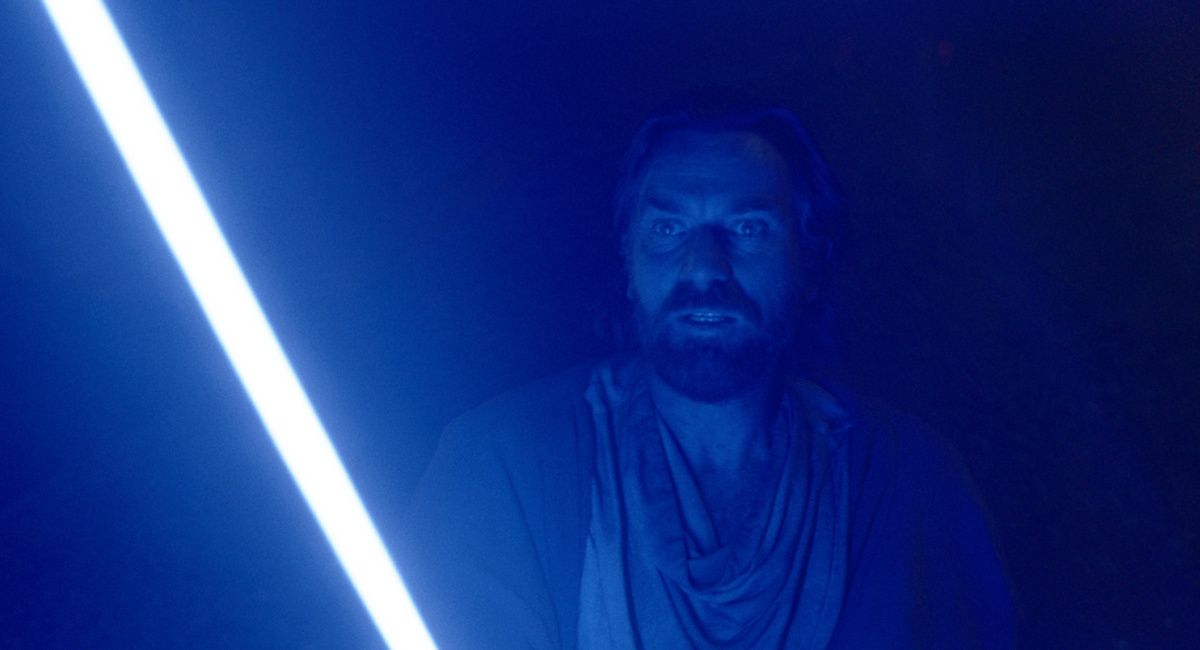 Last week was the start of the new Disney+ ‘Star Wars’ series ‘Obi-Wan Kenobi’. But what if you just happened to miss it? Don’t worry, we’re back to give you a quick rundown.

For those of you who missed the start, the episodes show us Obi-Wan (Ewan McGregor) post the prequel trilogy; having stationed himself on Tatooine to keep watch over a young Luke Skywalker (and unknowingly being hunted by Imperial inquisitors). He receives a call from Bale Organa (Jimmy Smits), in need of help when his daughter Leia (Vivien Lyra Blair) is kidnapped. It spurs Kenobi to leave his self-exile to save her.

Episode 2, it’s Ben and Leia on the run, escaping through a seedy mercenary planet, all with the Empire and Darth Vader (Hayden Christensen) slowly on their tails, dealing with fake Jedi and kidnapping mercenaries, and finally escaping on a cargo vessel. But now, we continue where that left off.

We open with a shot of Obi-Wan trying to call out for his old master, Qui-Gon (Liam Neeson). We get flash images of both Darth Vader in current time and Anakin Skywalker’s voice-overs from the prequels.

We see Vader talking to Reva (Moses Ingram), and it’s implied she hid the fact it was her who killed the Grand Inquisitor. Vader promises if she proves herself, the job title will be hers.

Back to Obi-Wan and Leia, and the little girl asking how the Force works. He asks her if she’d been afraid of the dark and mentions it’s like when you turn on a light. It feels safe. He hands her Lola, the adorable droid that Obi-Wan has fixed and brought back to life.

They approach the planet where the mining ship was headed, and it’s filled with Empire troopers. It’s revealed the planet is Mapuzo. Obi-Wan appears to see a hallucination of Anakin in the distance.

Cut to Reva reporting to an Imperial outpost. She informs the other Inquisitors that Kenobi is in a mining system, and that Vader put her in charge. There’s clear tension within them, and it’s seen as the Fifth Brother (Sung Kang) challenges her. She tells them to send out drones anyway.

Obi-Wan and Leia make it to the meeting point given by the fake Jedi, Haja (Kumail Nanjiani). Leia waves down a passing alien and get him to drive them to the spaceport. Freck (voiced by Zach Braff), an Empire sympathizer, picks up a group of storm troopers.

Kenobi accidentally calls her Leia, alerting the storm troopers. He lies, the troopers believe him, and they leave. Leia turns to him and confronts him, saying she knows Obi-Wan is lying to her. She asks if he’s her real father, but he tells her that he is not her dad.

He begins to explain how the Jedi took him from his family when he was young, but the moment is stopped by a checkpoint. Freck confirms their strays, and the troopers confront the two of them. He tells Obi-Wan to raise his head for a scan. He kills the troopers, but one grabs Leia.

He saves her and the two of them run, only to be stopped by another group of troopers. The Imperial officer with them kills the group and saves Leia and Obi-wan. Off planet, Reva and the Second Brother still argue, trying to steal the credit for finding Kenobi from one another.

The Officer, Tala (Indira Varma), is the one sent by Haja, and explains she can find them a way out. Leia apologizes to Obi-Wan for running and explains that she misses home. Tala explains that multiple Jedi have used the underground passageways to get away from the Empire. She explains that they are searching for anyone Force sensitive, not just Jedi, but especially children.

A pair of Troopers find the hiding spot and search the room, which is an old droid part depot. Leia approach’s Tala and asks if it’s scary to pretend. She explains why she joined the Empire, and that she stopped believing in what they were doing.

Tala opens the gate and Obi-Wan is hit with…something. It’s revealed what he felt was Darth Vader, as he is outside with the Inquisitors. He stops, as if sensing someone, and pulls a civilian out. Instantly snapping their neck and killing them. Kenobi sends Leia with Tala and tells her to get Leia to Alderaan. He makes it outside and runs as soon as Vader spots him.

It’s in the desert when Ben and Anakin are in front of each other once more. But instead of facing him, Obi-Wan runs, finally activating his saber as Vader tells him “You cannot run.” Once more pitting the two together.

“What have you become?” Ben asks, Vader responding “I am what you made me.” We’re shown a quick cut of Reva finding the droid workshop, making her one step closer to Leia and Tala.

Finally, our first lightsaber dual between Vader and Ben, cut between Reva searching for the other two. Tala decides to go back for Ben and tells Leia to run and find the pilot who will take her home.

Anakin most definitely has the upper hand in the fight, obviously taking advantage of Ben’s fall to time and trauma. Vader corners him, and throws Kenobi into a pit of fire, parallel to what Obi-Wan did to him in the prequels.

Tala saves Ben’s life, with her droid coming in for the save and then cut to Leia being trapped by Reva, her turning and running. The episode ends there.

Now, with a new ‘Star Wars’ series there’s so much one can speculate and discuss. So, let’s start off with something easy. Who might we see from existing lore that could show up in live action?

While this is still an early episode, I’d love to discuss a character who may or may not show up in the last half of the series. First premiering in the video game ‘Star Wars Jedi: Fallen Order’, Cal Kestis is a perfect fit for both returning Obi-Wan to his former glory and a great way to connect continuities.

In the series, we’ve already been shown how Kenobi has given up on the Force, even the Jedi Order. He seems helpless in front of Vader and it’s clear that his strength is basically gone. Bringing in a character like Cal, a survivor of Order 66 and one of the last remaining Jedi, would show Obi-Wan that the Jedi are not totally dead and that their philosophy still works.

See you all next week for more fun and surprises!