Sam Richardson sat down with us to talk about similarities in comedy and horror movies, and how well he can throw an axe. 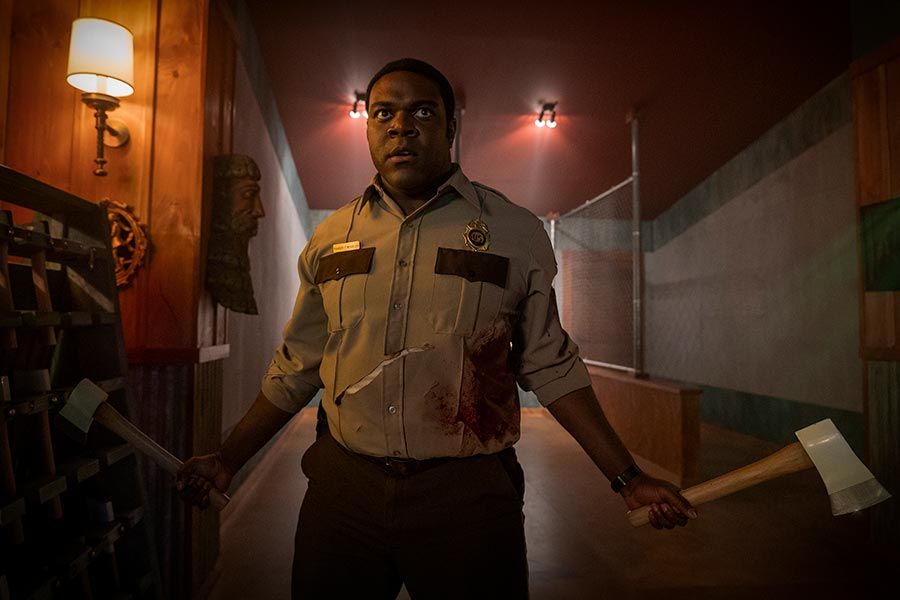 Sam Richardson in 'Werewolves Within'

In his latest film, Sam Richardson plays Finn, a National Parks Range, who has newly arrived to the small town of Beaverfield. As he checks into the local inn, he meets Cecily (Milana Vayntrub) the town's postal worker, and they seem to hit it off pretty quickly. But it turns out there is a mysterious creature terrorizing the town, so some townsfolk lock themselves in the inn for safety, and one of them may be the very monster they're all hiding from. This new horror comedy release from IFC films is based on the video game by the same name, and it also features Harvey Guillén, Cheyenne Jackson, and Glenn Fleshler. Richardson recently talked to us about making his new film.

Moviefone: How much were you improving versus just doing what's on the page? Were all the jokes on the page, or do you get to riff?

So for the most part, what we say in it is what was on the page. But of course you have such a great dynamic cast of people who are really proficient at improv and really great comedians. And when you get that energy in that room, you can't help but find some things to play with. And it all just helps the piece in the end.

MF: When you get a bunch of improv people together, it's tough to turn that off, isn’t it? Even if you're supposed to stay on schedule, your natural inclination may be to "yes, and..." whatever somebody says, right?

MF: Does that make for longer days? Or do you have to then turn that off and think, "Oh no, we need to focus."

Richardson: With a mystery movie, like a whodunit, you have to make sure you stay on the rails so that you don't introduce new things that won’t pay off, because the margins are very narrow. Also, with a lower budget film, you don't have days that you're like, "Oh, let's boot this scene to... We'll make up this day next week." You don't have that luxury.

But I think Josh did a great job of harnessing and navigating all these energies, but at the same time, also letting us feel free and have ownership of our roles and our parts and our lines or dialogue, but still keeping us on the track because, especially with this many people and this kind of story, you really want to make sure you're poignant.

MF: The line about Finn's work shirt is the funniest unexpected joke I've heard in a movie in a long time. Was that on the page or was that something you came up the day?

Richardson: (Grinning) That was on the day.

MF: You've got such a great cast here that you get to work with. You have terrific chemistry with Milana. I would absolutely watch a whole other movie about that relationship. Have you guys known each other before? Or was this the first time you had worked together?

Richardson: Well, we've known each other for a little bit, not super well, filming this movie was the most time we'd spent together, but I'd known Milana for a few years and this is my first chance to get to work with her. And she's a brilliant actor, really studious scene study and character study and just a wonderful energy to play off of, that I think our chemistry just jumped from action.

MF: This is one of the first roles we've really seen you as a kind of action hero. Although, Finn isn't your traditional action hero. What's your entry to a character like that?

Richardson: Well, it was very exciting because I'm a big fan of genre. I'm a big fan of action movies and spy movies and thief movies and monster movies. So the idea of getting to lead an ensemble, horror genre movie as the sort of atypical your hero or protagonist, was very exciting and approaching this character where his Achilles heel is his propensity towards niceness, which is not a typical quality of an action lead. And having that be something he navigates, was a really fun thing.

I think my previous work of playing a lot of nice guys and sweet characters ramped me into that, and then trying to figure out, this character who's dealing with what it means to be nice and what are the consequences, or what does it mean to be nice and what's wrong with being nice or what's right about being nice, was really interesting.

MF: I love the melding of comedy and horror because they're both so dependent on timing. Your sense of comic timing, does that also come up when you're doing a horror movie like this? And does that serve you when you're on the set, when you're supposed to react and to be scared?

Because those are things that we deal with all the time, but the bigger reactions are when you're laughing at something and somebody scares you, your brain doesn't know what to do. So getting to play with those energies, it was a really fun exercise. And I think comedy really lends itself towards that in this script.

MF: Some of the movies that play best in theaters are comedies and horror movies, because that energy from an audience is so infectious. But I'm curious, is that tougher on set because you don't necessarily have an audience to pay off a joke or even pay off a scare?

Richardson: Well, I feel that the relationship with live comedy and a live comedy audience, is such a unique one because you are playing off of the energy that you get in the room and in the moment. But I think, having trained in that atmosphere, you kind of know what those sorts of energies and those moves are, and then you're not beholden to playing for reaction.

Because I feel like what happens in live comedy and to the benefit of it, is that it's malleable in that you're both moving in tandem. But when you do it for film and television, you know those things and so you're able to adjust those things without worrying about, or without catering to what this instant feedback is.

You as a comedian who knows your timing and knows your levels that you want to play with, you can then adjust, I think. And also the great part about that versus live theater is that you get to do it over and over again until you hit that exact rhythm and beat that you want. You can do it more than once. That's really cool.

MF: All right. So I've got one final question. How good are you at throwing an ax now?

Richardson: I'm very good at throwing... I mean, I was okay at throwing an ax before, but now I'm all the better. So look out. If you want to follow me, and I've got axes, just know that it ain't going to end well for you.

‘Werewolves Within’ is in theaters and streaming.