Moviefone speaks with Anya Taylor-Joy and Nicholas Hoult about 'The Menu.' "I wanted to play with these really talented individuals," the actress said.

Opening in theaters on November 18th is the new black comedy ‘The Menu,’ from director Mark Mylod (‘What’s Your Number?’)

The movie stars Anya Taylor-Joy as Margot and Nicholas Hoult as Tyler, a young couple who travel to a remote island to eat at an exclusive restaurant run by celebrity chef Julian Slowik (Ralph Fiennes). Chef Slowik has prepared a lavish molecular gastronomy menu, but his approach to cuisine has some shocking surprises for the wealthy guests.

Moviefone recently had the pleasure of speaking with Anya Taylor-Joy and Nicholas Hoult about their work on ‘The Menu,’ their first reaction to the screenplay, the tone of the film, food, their characters, and working with director Mark Mylod and the rest of the impressive cast. 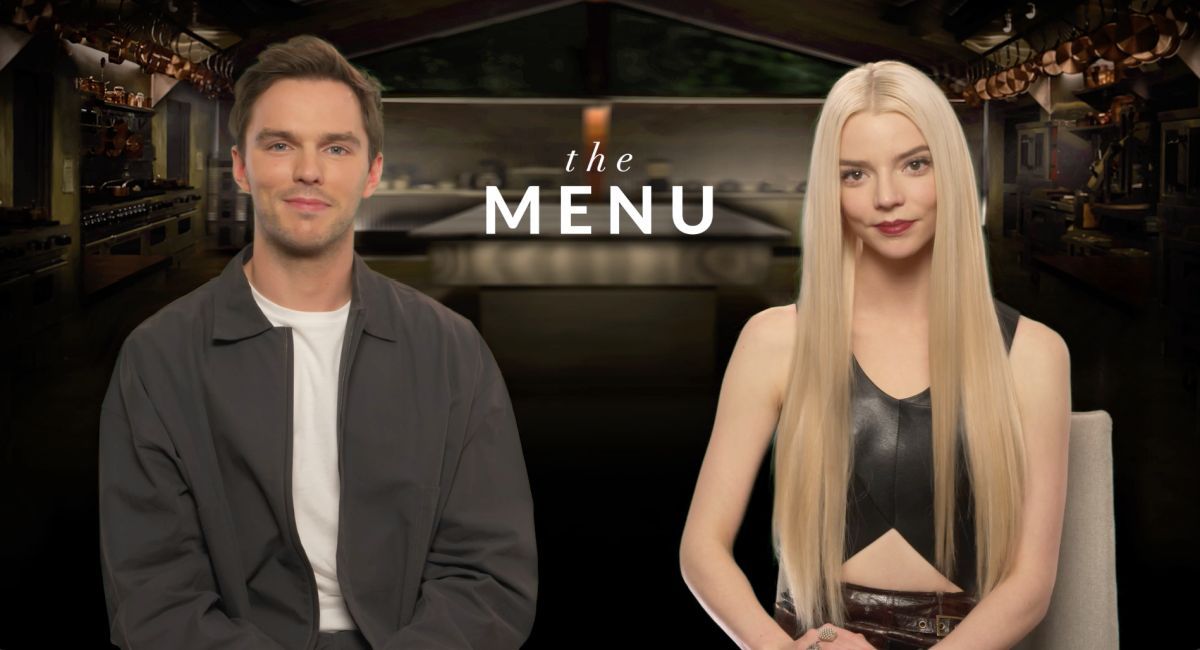 You can read our full interview below or click on the video player above to watch our interviews with Taylor-Joy, Hoult, Hong Chau, Aimee Carrero, and John Leguizamo.

Moviefone: To begin with, Anya, what was your first reaction to the screenplay when you originally read it?

Anya Taylor-Joy: I've become very good, just due to the sheer amount of scripts that I read and the cinema that I consume, and I can usually tell where something's going to go, or I can guess a line. In this one, absolutely not. I don't know how anybody guesses that ending in any reality.

I was so excited by the prospect of doing something that original. Then as the cast started filling out, it just became more and more exciting because I wanted to go and play with these really talented individuals, and I was a huge fan of Mark's work. So, it all kind of came together really beautifully.

MF: Nicholas, can you talk about the challenges of navigating the movie’s different tones?

Nicholas Hoult: Yeah, it really bounces around all over the place. That was something reading it where you're like, "I think this is funny," but then you'd be like, "But also horrific things are happening at the same time, so maybe it's not funny." That, again, was just something that Seth (Reiss) and Will (Tracy), the writers, did a really great job of creating this world that is extreme and hyper real, but also satirical and poking fun at all these extreme characters.

So, it was like a fun place to play because you could play the characters very authentically, but at the same time, they're all larger than life characters and slight stereotypes in a way. You see them in really fun ways. So yeah, it was just great writing.

MF: Anya, Margot has a different connection to Chef Slowik from the other guests, can you talk about their relationship and why Slowik takes an interest in her?

ATJ: It's a bizarre intimacy to explain because it's not easy to categorize, but I think they recognize something in each other and that begins a kinship. I think for Chef it begins as desperately wanting to categorize her and then bizarrely feeling like he enjoys her pushback. He enjoys being told no, or he enjoys the fact that someone's not being as reverential as everybody else is being.

It sounds crazy because of what happens in the movie, but I think she recognizes a wounded artist and someone who's genuinely hurt and upset. That's how she starts figuring him out. Those scenes were an absolute joy to play.

MF: Nicholas, can you talk about Tyler and his obsession with food?

NH: He is a real foodie. So, that was part of the research for this, which was very nice. I just got to watch food shows, go to nice restaurants and pretend to be a bit of a foodie. But I had to do it. I did it and took it upon myself and then it's fun. It's actually a great thing about the writing as well because a lot of the time things are so over explained, and I find as an audience member you kind of fill in the blanks or you can imagine and create your own storylines for all these people.

So, obviously sitting down with Mark and beginning this process, it was creating the relationship between these characters and how that unravels. But also, Tyler's ideas and thoughts about Chef Slowik and what brought all these characters, I guess, to that restaurant that evening. So, it's kind of fun to leave it in the actual film, but more up for interpretation. Then as actors to have all this backstory that when you turn up on day one and walk into the restaurant and fill in those characters, you kind of have a lot to bring to it that kind of doesn't ever have to be said.

MF: Finally, Anya, this is one of those rare films where almost every cast member is on screen at the same time. What was that experience like, having the opportunity to work with all of the actors in this movie?

ATJ: Completely. It was amazing. Mark had told all of us that he wanted to shoot the film in a 360 degrees kind of way, and he wanted us all to be mic’d and on set the whole time because you never really knew when the camera was going to be on you. It was, I think, like a Robert Altman-style quality that he wanted to bring to it.

But what was really beautiful is, oftentimes if it's not your scene or your closeup, you'll go to your trailer and rest, or hang out somewhere else other than set. We just spent all of our time on set because if you weren't acting opposite somebody as lovely as Nick or Ralph, you had front row seats to these incredible performers, and you just got to enjoy them. People would clap after takes. It was just a really beautiful, supportive environment.

A couple travels to a coastal island to eat at an exclusive restaurant where the chef has prepared a lavish menu, with some shocking surprises. Read the Plot