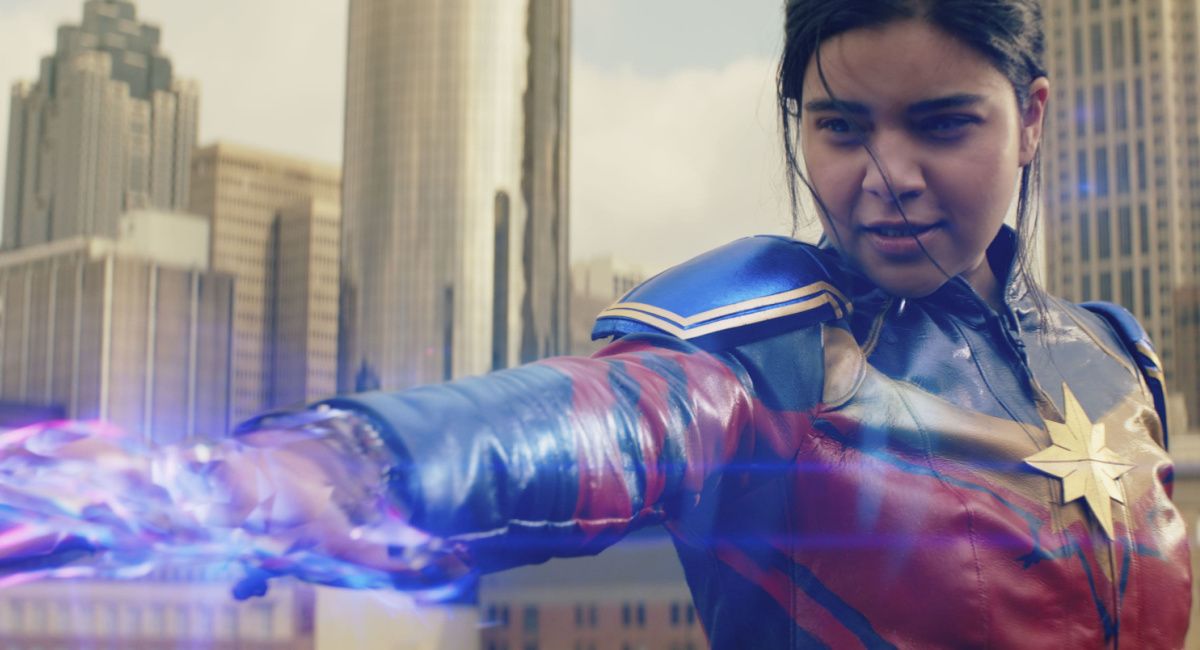 Premiering June 8th on Disney+ is the new Marvel series ‘Ms. Marvel,’ which introduces the title character to the MCU, who will next be seen in ‘The Marvels.’

The first and final episodes of the six-part series were directed by executive producers Adil El Arbi and Bilall Fallah (‘Bad Boys for Life,’ ‘Batgirl’), and introduces audiences to Kamala Khan (Iman Vellani). She is a 16-year-old Pakistani-American obsessed with Captain Marvel and the Avengers, who eventually gains the ability to harness cosmic energy and create constructs with her magical bangle, making her a superhero too.

The series begins by introducing us to Kamala Khan (Vellani), a 16-year-old Pakistani-American Avengers fan girl, whose favorite superhero is Captain Marvel. With her best friend Bruno (Lintz), Kamala is making a Captain Marvel cosplay costume to wear to the upcoming Avengers-Con. But her over protective mother Muneeba (Shroff) does not want Kamala attending and would rather she focus on her school work. Searching for an item to personalize her costume, Kamala finds a bangle belonging to her grandmother in the attic and sneaks out with Bruno to attend the convention.

But when an accident endangers the patrons at the convention, Kamala discovers that her bangle gives her the ability to harness cosmic energy and create physical constructs. She uses her powers to save the day but unknowingly becomes a public hero and is now being hunted by a mysterious organization.

Meanwhile, Kamala battles with her mother and father (Kapur) for independence, encourages her friend Nakia (Fletcher) to be her own person, meets a mysterious new boy (Shah), and works with Bruno to control her new powers and become a hero.

‘Ms. Marvel’ is the seventh series Marvel Studios has produced for Disney+ following ‘WandaVision,’ ‘The Falcon and the Winter Soldier,’ ‘Loki,’ ‘What If …?,’ ‘Hawkeye,’ and ‘Moon Knight,’ with countless more Marvel series on the horizon. ‘Ms. Marvel’ retains the high quality and production value that fans expect from the Marvel movies, as well the Disney+ shows. But it also feels unique and stand-alone, even if it takes place in the MCU.

One of the criticisms of the Marvel shows and movies since the launch of Disney+ is that the films are just advertisements for the series, and vice a versa. While its well known that Iman Vellani will star opposite Brie Larson in the upcoming ‘The Marvels,’ the new Disney+ series feels nothing like an advertisement for what is to come, but rather an introduction to something new in the MCU … a Marvel fan!

Just like in the real world where we have Comic-Cons where fans dress up as their favorite fictional characters, it would only make sense that within the world of the MCU, they would have similar conventions where fans celebrate their favorite heroes, only in the MCU the heroes are not fictional. Making Kamala Khan a fan girl was a brilliant move, as it makes her an extremely retable character for the Marvel fans watching the show.

Fans of Kamala Khan will also notice that her powers have been drastically changed from the comics, where she was originally given the ability to stretch. Marvel has decided to change that, perhaps concerned fans couldn’t take two stretchy characters in the same universe now that John Krasinski has been introduced as Reed Richards in ‘Doctor Strange in the Multiverse of Madness,’ and a ‘Fantastic Four’ movie is in pre-production.

But they also changed the origin of how Kamala received her powers, with them now coming from a bangle that belonged to her grandmother. Instead of stretching, Kamala can harness cosmic energy and create physical constructs, not unlike the Green Lantern from DC Comics. But, the constructs she creates includes her signature “big hand” from the comics. The choice to change up her powers and how she got them really works and rooting them in her own family history and culture helps drive the character and her story.

In fact, the strongest part of the first two episodes, besides the superhero action sequences, is the sense of family and culture you get from Kamala’s relationship to her loved ones and friends. You really get a sense of who Kamala is in the opening moments of the series, watching the young girl juggle school, friends, family and the occasional fun. Actress Iman Vellani is a lovely discovery, and her performance as Kamala Khan is excellent bringing a very relatable teenager to the screen with all the emotions and expectations that come with that.

Zenobia Shroff and Mohan Kapur bring a lot to the series playing Kamala’s parents. Shroff’s Muneeba is an extremely traditional and protective mother, but you do get the sense that she is just trying her best to raise her daughter safely. Kapur’s Yusef is clearly the “fun dad” and its heartbreaking to watch Kamala pull away from his love as she grows and matures. Along with Saagar Shaikh who plays Kamala’s brother, all four actors do wonderful work creating a completely believable and relatable family dynamic.

Matt Lintz and Yasmeen Fletcher play Kamala’s friends, Bruno and Nakia, respectively. My best guess is that as the series goes on, they will play roles similar to Ned Leeds and MJ in the Tom Holland ‘Spider-Man’ series, as Kamala’s closest allies. But keep an eye on Bruno, as its clear he has hidden feelings for Kamala, he could go over to the dark-side if her friendship with the mysterious Karman progresses. It’s also obvious that something else is going on with Rish Shah’s Karman and discovering who’s side he is really on is going to be one of the big questions answered by the series’ end.

First and final episode directors and executive producers Adil El Arbi and Bilall Fallah do a great job of setting the tone for the series with the first episode, and also using animation to progress the story. Their other big contribution is focusing on Kamala as a person first, before meeting her as a hero. They really set her up as an average teenager, worried about school, family, friends, and of course, boys.

Coming off of the practically hard R-rated horror of ‘Moon Knight,’ some Marvel fans might be confused by the teenage family drama of ‘Ms. Marvel,’ but should give the series a chance. While the show is clearly for a younger audience, there is still a lot there for older fans of Marvel to enjoy.

The first two episodes of ‘Ms. Marvel’ receives 4 out of 5 stars.