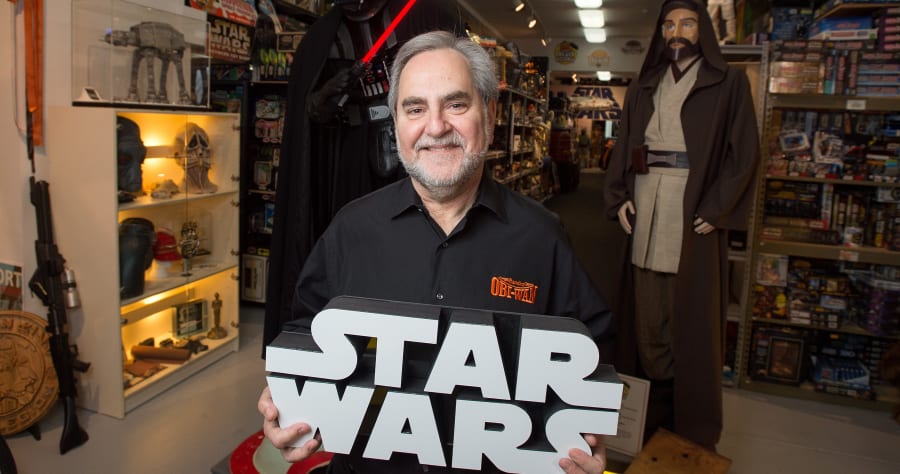 Fans, as well as actors Mark Hamill and Peter Mayhew, are rallying around ultimate "Star Wars" collector Steve Sansweet after he says one of his best friends robbed him of $200,000 of collectibles.

Sansweet owns Rancho Obi-Wan in Petaluma, California, a 9,000-sq-ft warehouse where he stores his massive collection of "Star Wars" merchandise. Since 1977, he's amassed at least 350,000 items from the franchise and holds the Guinness Book of World Records for his collection.

Yesterday, he shared the news on his website that his friend of 20 years, Carl Edward Cunningham, 45 of Marietta, Georgia, had allegedly robbed him of $200,000 worth of merchandise. Among the items reportedly stolen are "vintage US and foreign carded action figures, many of them rare and important pieces."

Cunningham has reportedly robbed other collectors and been reselling the items, but since the "Star Wars" fandom is a close one, other deals are now on guard for the missing items. Sansweet is asking for fellow fans' help if they see items of his for sale. If you have any tips, you can email him at tips@ranchoobiwan.org.

"It's devastating," Sansweet told the Guardian. "It's a feeling of utter betrayal that someone could stoop to this level, an alleged friend and confidant, someone I had invited to my house and shared meals with." He says after learning about the theft, "my stomach physically sank. I was queasy. I was dumbfounded."

Cunningham was arrested in March and charged with felony grand theft. He is free on $25,000 bail and a preliminary hearing is scheduled for June 27, according to The Guardian.

This is despicable. Keep an eye out. Get the word out. @HamillHimself@ThatKevinSmith@jordanhembrough@RanchoObiWanhttps://t.co/9xX62beSVC

We wish Sansweet luck in recovering his collection.