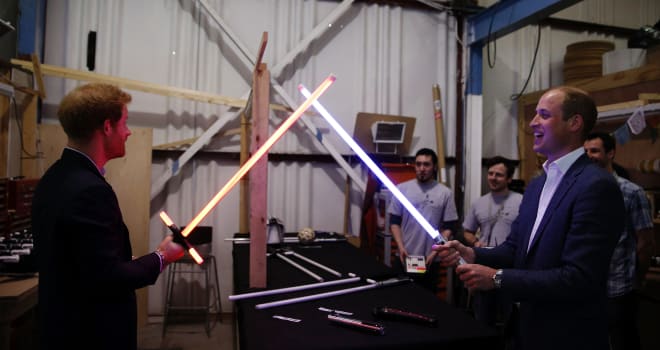 Welcome to a galaxy far, far away, Prince William and Prince Harry!

The Duke of Cambridge and his brother visited Pinewood Studios, where "Star Wars: Episode VIII" is currently filming. They toured the set and looked at costumes and props. But boys will be boys, and the princes seemed to enjoy one part of the tour the most: playing with lightsabers.

Time for a @starwars laser battle!

Prince Harry has made a new friend... pic.twitter.com/mTra1UoSMx

...and so has The Duke! pic.twitter.com/c9gOh4ACyA

Rey develops her newly discovered abilities with the guidance of Luke Skywalker, who is unsettled by the strength of her powers. Meanwhile, the Resistance prepares to do battle with the First Order. Read More