Chris Evans and Jenny Slate Are Reportedly Dating, and the Internet Is Giddy 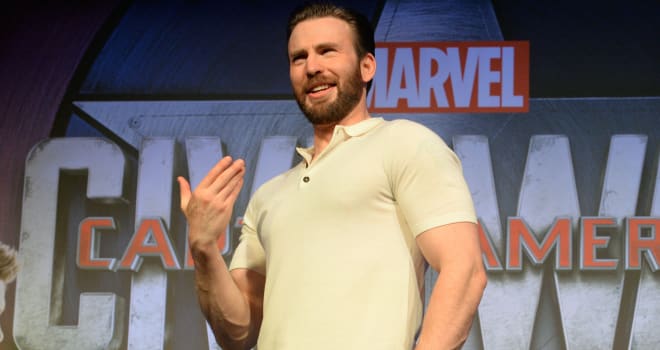 And the official winner of "Captain America: Civil War" is ... Jenny Slate! The comedian/actress/author, known from "Saturday Night Live," "Obvious Child," "Marcel the Shell With Shoes On,"and as the wooooorst sister on "Parks and Recreation," recently split from husband Dean Fleischer-Camp and has moved on with Captain America himself, Chris Evans.

That's the news from "a source" to Us Weekly, anyway, and fans have responded with pleasant surprise (when they're not crying).

The actors, both 34, reportedly connected while filming the upcoming movie "Gifted." They
They went on a double date with his brother Scott Evans in Hollywood back in March. And they were also on Anna Faris's "Unqualified" podcast together last month.
Is it a serious romance? Is it PR? Time may tell, since the line keeps getting blurred (damn you Jon Lovitz and Jessica Lowndes!) and the timing is suspect. He is promoting a movie, they have a new movie together, and she JUST announced her split with her husband. But Evans does have a track record for dating brunettes, and he's been linked (repeatedly) to Minka Kelly, plus Lily Collins, Sandra Bullock, and Jessica Biel.

Jenny Slate started trending on Twitter after the dating news broke, and fans have reacted with approval -- and disagreement about which one of the two is getting the better deal. Some fans seem to have embraced the idea that, if Captain America is into a woman famous not for her looks but for her humor, talent, and personality -- and they are even, gasp, THE SAME AGE -- then maybe there's hope for a further cultural shift. Either way, they are both scoring points from this rumor/report.

Actually screaming about the Jenny Slate/Chris Evans rumors. TAKE ONE FOR THE TEAM, GIRL.

I don't usually care about celebrity dating, but if CEvans & Jenny Slate really -are- dating, that makes me all kinds of giddy

Jenny Slate and Chris Evans give me hope that as a fellow dorky girl, I too may find a man who looks that great in sweatpants.

It's hard to imagine how Chris Evans could upgrade, but Jenny Slate is definitely punching up, buddy. She's so cool.

Today we are all Jenny Slate.

Jenny Slate got a divorce and immediately upgraded to Chris Evans pic.twitter.com/Nf0Gy6i644

Chris Evans just got like a bazillion cool points in my book. Jenny Slate is the best.

And just like that my feelings regarding him have shifted from cautious disdain to intense attraction/affection. https://t.co/ybA6TdlzDr

Oh, Internet. So excitable, so quick to judge. At least today the majority of fans seem happy with this news, even if (of course) they immediately made it about themselves. Never change!

The 25 Greatest Marvel Comic Book Movies Ever Made, Ranked

32 Things We Learned on the Set of 'Black Panther'