Even if you have a high tolerance for jokes about Donald Trump, the 69th annual Emmys ceremony, with its countless references to Trump and to how television is responding to his presidency, was bound to test your patience.

Fortunately, host Stephen Colbert and his fellow presenters kept things moving at a rapid clip. And there was still time for some memorable moments -- some hilarious, some poignant, some appalling. Here are the awards telecast's highs and lows.

BEST MUSICAL NUMBER: "Everything Is Better on TV"

Colbert's musical opener was so jammed with pointed punchlines, topical references, in-jokes, and just plain absurd moments that there was no way you could catch them all on first or even second viewing. But the overall rueful point was that, as miserable as primetime's fictional worlds are (from "The Walking Dead" to "Stranger Things" to "The Handmaid's Tale" to "This Is Us"), they're still more pleasant than the reality we learn about from the news.

Highlights included a long break by TV fan Chance the Rapper and a finale involving a kickline of bonneted Handmaids that included a couple of dudes because why not?

The "Superior Donuts" star added some youthful enthusiasm to calling out the names of nominees and winners, as well as some wry asides (reciting some trivia about one winner, he noted that he learned that factoid on the Internet). Depending on your point of view, Fowler's fan-like breathlessness was either refreshing or unprofessional.

Colbert's interview with the Emmy trophy was largely joke-free. Sure, casting the statuesque RuPaul as the statue was clever, but the campy dishing about other award-show trophies was surprisingly dull and short on laughs. It's superfluous bits like this that are the reason the telecast runs past the three-hour mark.

The comic chemistry between presenters Robinson and Scott boded well for their upcoming Fox sitcom "Ghosted." The two went on an extended riff on how lucky they were not to win Emmys -- they didn't have to lug around a heavy statue, shop for a tiny piece of paper to write a speech on, or do any real work in order to appear before an audience of millions on the Emmy stage.

Honorable mention goes to Colbert and Last Week Tonight." It's a cocktail of such high quality, noted the prolific network talk show hosts, that it can be made only once a week.

We don't know why Grace and Frankie" with her "9 to 5" co-stars Jane Fonda and Lily Tomlin, but at least the three stars of the 1980 workplace comedy, all of them nominated for Emmys this year, reunited as presenters of Supporting Actor in a Mini-Series.

Tyson, who had a guest arc last year on "House of Cards," is a TV legend, but the 92-year-old Emmy presenter found herself overcome during her live moment. Brought on to mark the 40th anniversary of "Roots" (she was Kunta Kinte's mother) and to present the Best Mini-Series trophy, she blanked twice, with long, silent pauses she attributed to nerves. Co-presenter Big Little Lies" inside the envelope.

There were several historic firsts at the ceremony, including Atlanta" star was also the first actor since "M*A*S*H"'s Alan Alda 40 years ago to win for directing his own performance).

And "Master of None's" Lena Waithe became the first African-American to win for comedy writing. Her speech was especially inspirational. "The things that make us different, those are our super powers," she said. "Because the world would not be as beautiful as it is if we weren't in it." It was the best celebration of diversity in an evening full of such sentiments.

Viola Davis was powerful, as always, in introducing the tribute to passed-on performers, and Christopher Jackson's rendition of Stevie Wonder's "As" was touching. But while the montage included a number of fan favorites (Adam West, Florence Henderson, Mary Tyler Moore), too many were missing.

Yeah, the deaths last week of Frank Vincent and Harry Dean Stanton probably came too late to squeeze them in, but what about such stars as Erin Moran, Judge Wapner, Stephen Furst, June Foray, Richard Anderson, or Dick Gregory?

The "Handmaid's Tale" co-star's Supporting Actress acceptance speech was the kind of emotional moment that awards shows are made for. The 61-year-old has been a largely unsung character actress for most of her career, which made her tearful win all the more moving.

"I know it's an actor's dream and I'm grateful to you," she told the TV Academy. "I've been acting for a long time, and that this should happen now, I don't have the words, so thank you."

The "Big Little Lies" Supporting Actor winner redefined the word "cool" -- literally. First, he said he thought it was "pretty cool" to get an award from the "9 to 5" stars. Later, he thanked his mom for flying from Stockholm to Los Angeles to join him at the Emmys -- and, oh yeah, for giving birth to him, which he thought was also "pretty cool." This is why actors have writers.

BEST "THIS IS US" JOKE: Sterling K. Brown's Speech

The tearjerking NBC hit got several shout-outs, including an opening monologue riff from Colbert asking Milo Ventimiglia if the show would stop being coy about his character's mysterious demise. ("I'm just saying: your fans want you dead.")

But Brown, accepting the prize for Best Actor in a Drama, got the best quip, referencing some classic '80s shows. Praising his co-stars, he said, "You are the best white TV family that a brother has ever had, better than Mr. Drummond, better than them white folks that raised Webster."

Sure, it was smart to give the "Crazy Ex-Girlfriend" star a musical number, but one introducing the Ernst & Young accountants? Meh. Give Bloom her own awards show to host. She'd be perfect for the Tonys. 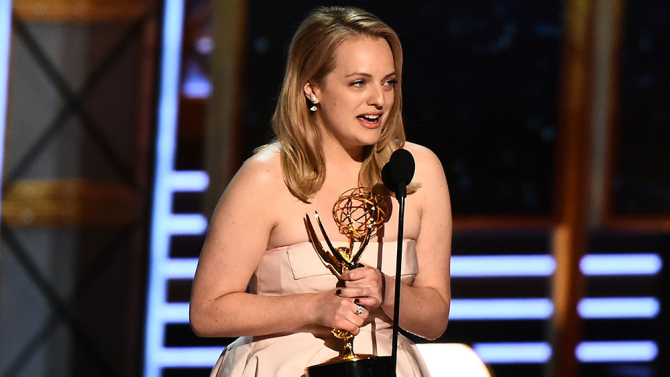 The show's Best Drama Series win was so sweet that it didn't even matter that the speaker who accepted the prize (series creator Bruce Miller) was a man. Plus, he brought to the stage novelist Margaret Atwood, who created Gilead in the first place. In an evening full of reminders of how scripted TV is responding to real-world turmoil, Miller's was the pithiest and most modest: "Go home, get to work, we have a lot of things to fight for."