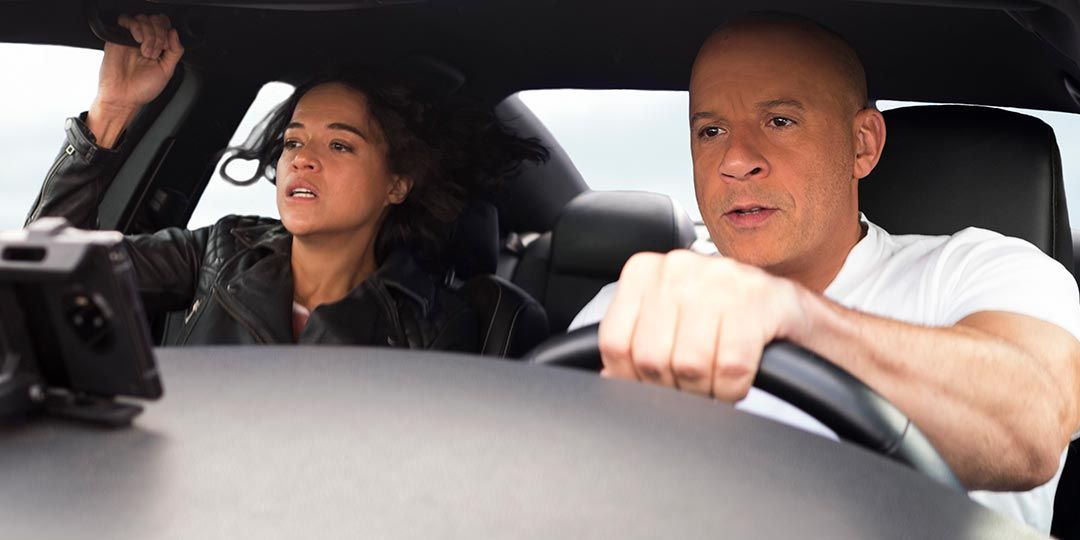 It’s hard to look at the 20-year-old ‘The Fast & the Furious’ and see the beginnings of a blockbuster franchise, but here we are. And if the series has moved past illegal street races and into heist and spy movie territory, that’s all for the better. As this rogue's gallery of street racers has become an unstoppable team of vehicle-based super agents, the movies in the franchise have increasingly raised the stakes for our heroes, physics and reality be damned. And you know what? It's worked, including the latest chapter 'F9.'

Where do you go after taking on a tank, a cargo plane, and a submarine? I won’t spoil anything here (although you’ll get some hints from the trailer), but it’s pretty impressive how director and co-writer Justin Lin takes the series to new heights while acknowledging the increasingly insane action sequences our heroes find themselves in.

Our story starts off with a flashback to Dom’s past, as he’s part of his father’s pit crew at what will be turn out to be the senior Toretto’s final race. We’re also introduced to Jakob, Dom’s younger brother. It’s hard to imagine that Dom, always preaching to us about family, has never, even mentioned his brother, but that’s far from the least-believable element in this movie. (To be clear, I’m not complaining about over-the-top elements, but you’ll need to go further than “willing suspension” and actively lock up your disbelief and throw away the key.)

We soon return to the present to see Dom (Vin Diesel) and Letty (Michelle Rodriguez) living a bucolic life off the grid with young Brian, Dom’s adorable young son who (of course) is being taught how to fix engines by Dad. Do the Torettos miss all the extreme driving? Of course they do, but Dom claims to have left that in the past. But as an unknown SUV pulls up, Dom & Letty pull out some fairly heavy-duty weaponry and send Brian off to hide; clearly they fear the past hasn’t left them.

Their visitors turn out to be more of the old crew - Tej (Chris “Ludacris” Bridges), Roman (Tyrese Gibson), and Ramsey (Nathalie Emmanuel), who are welcomed with open arms. The visitors have come with news that the man that brought them into the spy game, Mr. Nobody (Kurt Russell) has sent them a cryptic S.O.S. message. The message contains coordinates and evidence that an old nemesis, Cypher (Charlize Theron) is involved. Although initially hesitant, Dom joins the rest of the crew on a trip to Central America to find out what happened to Mr. Nobody.

Now that we have buy-in from Dom, the plot can get really get started. The crew’s discovery of mysterious tech leads to gunfights and a wild chase scene through the jungle, which then sets the stage for Jakob Toretto (John Cena) to make an appearance. It’s not a joyful reunion for the Toretto brothers. Jakob, almost as skilled a driver as Dom, is now a rogue secret agent, and makes off with that MacGuffin, leaving the rest of the crew dumbfounded. And now Mia (Jordana Brewster) is involved since, as she reminds Dom, Jakob is her brother too.

The plot then goes into classic James Bond territory; it turns out Jakob is working for Otto (Thue Ersted Rasmussen) the billionaire son of the head of an unnamed state, who plans to use the MacGuffin tech to take over the world. The plot jumps through a few hoops to show us some familiar faces past entries in the franchise, including Lucas Black, Helen Mirren, Shad “Lil’ Bow Wow” Moss, and most notably, Sung Kang as Han. The news of Sung Kang’s return broke a long time ago, but like the sudden discovery of brother Jakob, the story of Han’s reappearance is far from the most unbelievable part of the movie.

As in other long-running franchises, it can be tricky to give all the returning characters enough screen time to satisfy, but Lin manages to give everyone more than simply one moment to shine. In fact, one of the smartest moves he makes is to use the characters almost as a sort of Greek chorus, to comment on the very tropes he’s using in the movie. In one hilarious (and frankly mind-blowing) Gibson’s Roman questions the crew’s repeated survival, almost as if Lin was cribbing from Tom Stoppard’s ‘Rosencrantz & Guildenstern Are Dead.’ We also get another character saying “if this was a movie, this is the moment when...” and I’ll be damned if it doesn’t work. But there are also some moments that give some characters a little more depth. The brief meditation on parenthood from Letty and Mia doesn’t feel forced too forced, mainly because Letty basically admits she’d rather be tearing it up instead of hiding out. And in one of the more inspired choices, we discover that Ramsey doesn’t drive, so obviously she has to get behind the wheel.

Rest assured, that if you came for the spectacle, you won’t be disappointed, and it’s amazing that the filmmakers are still coming up with new things to do with vehicles. This franchise has always made sure to make the cars into co-stars, and on his third outing in this series as cinematographer, Stephen F. Windon, is still using bright and vibrant colors and lighting to make the cars pop, and his framing really gives us a sense of the layout of each location. A trio of editors, Greg D’Auria, Dylan Highsmith, and Kelly Matsumoto, deftly follow multiple characters through each set piece and allow us to see the stakes for each individual without losing sight of the whole or getting confused as to who is doing what. There is one particular shot of Cena looking through iron bars that comes off a bit campy, though.

As much as this movie is a spy story, Lin keeps us invested in the relationship between Dom and Jakob. Flashbacks to Dom’s past will pop up throughout the film, and Lin uses them fairly effectively to support an arc in the brothers’ relationship as the movie progresses. This is absolutely an action movie, but Lin’s past outings in the franchise gives him a familiarity with the characters that helps this movie be a bit more than a just smash-em-up car movie. I may have some minor grumbles about some of Lin’s decisions (especially one of the final shots), but F9 turns out to be one of the better entries in the entire series. There’s also a great mid-credits scene.

For what it’s worth, I’m glad to have seen this on a big screen, although I’ll admit I love every entry in this franchise. I’m glad this one was held until it was safe (or safer) to go to a theater. If you’re open to it, there’s an infectious sense of fun that permeates this movie, and you’ll really feel it if you’re seeing it with other fans at the same time.