Alex Wolff shares what a profound experience he had working with Nicolas Cage, and he also admits to driving without a license while shooting 'Pig.'

In the upcoming film ‘Pig,’ Alex Wolff plays Amir, a slick supplier of high-end ingredients to high-end restaurants. Wolff has appeared in both blockbusters like 'Jumanji' and indies like 'Hereditary' in 2018, and his newest movie falls squarely in the latter category. He co-stars with Nicolas Cage, who plays a hermetic truffle hunter whose only contact with the outside world is Amir. At this point, Cage's career is legendary, with early roles in movies like 'Valley Girl' and 'Peggy Sue Got Married' then working with iconic directors like the Coen Brothers on 'Raising Arizona' and Martin Scorsese on 'Bringing Out the Dead.' So it should come as no suprise to hear Wolff describe working with Cage was a profound, life-changing experience, and he sat down with us to talk about the new movie. 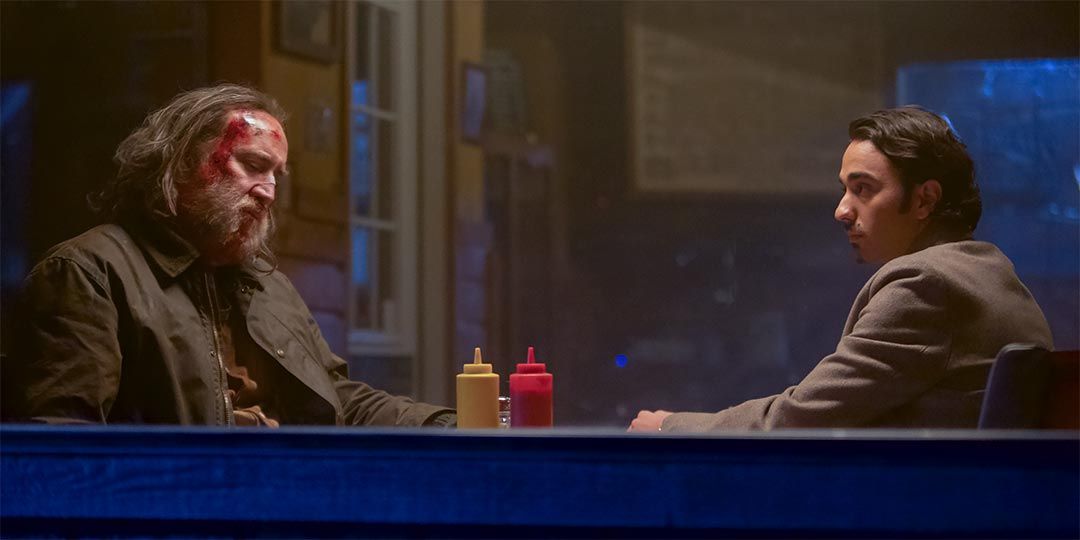 Moviefone: This is the second really powerful movie I've seen you do that really delves into grief. But this has a different take on grief, was that something that was attractive to you when you saw the script?

Alex Wolff: What was the first one you mean? Are you talking about Hereditary?

Wolff: Well, that's interesting. I would say the grief is a theme in this. I'd say grief has run through a lot of the themes of maybe a lot of the work that I've done, and maybe represents something in me. But I feel that this movie in some ways is as much about friendship and learning how to make a friend than it is about grief. I'd say it's a really fun, just kind, emotional wallop, this one.

MF: What's it like collaborating with Nicolas Cage? You guys have a lot of scenes together and play off each other really nicely.

Wolff: A lot of people talk about their costars as it being a special relationship and whatever, but this was a whole other level of profoundly inspiring for me. And we did some interviews about it earlier, and I was stifling tears the entire time. As trite is that may sound, we were so... He's the whole reason I really even started acting, and so to get to be learning from him every day and have him guide me through these scenes and carry me through these obstacles was an experience that I'll never have again, and I would never ask for that again. It was a real gift from the world. I don't know what I did to deserve it, but this couldn't have been a more deep, beautiful, inspiring, rewarding process.

MF: You've got some great scenes with Adam Arkin, too, who kind of stealthily sneaks in here and hits you with some emotion, too.

Wolff: He's incredible. My mom had done a play with him years ago, and so I knew him as a little boy. So it was so funny coming back and doing this thing of him being my dad. I started to be like, "Wait, you're not my real dad, are you?" Just kidding. But no, he's unbelievable and terrific.

MF: There's that great scene, I don't want to give too much away, but did you get to learn to cook a particular recipe on set for that one scene?

Wolff: I followed Nic around. I followed Nic and his cooking endeavors. I really just took all my cues from him, and he helped me cook these things. I mean, Nic became a real chef.

MF: You've got a bunch of scenes where you're driving a car around. Is that you driving? Is it being towed on a trailer?

Wolff: Oh, wow. I did not expect this question. Well, some people are going to get in trouble. I actually don't have my license, and yet I was really driving. I live in New York, I take the subway everywhere. And yet I lied and said I did have my license, and they let me drive, and I drove a super expensive, really cool Camaro. And it was just wildly dangerous, wildly fun. And I couldn't have done it with anyone other than Nic in the passenger's seat.

MF: Was it nerve-wracking knowing that you don't have your license?

Wolff: No. So fun. It was more fun. I felt like I was playing a trick on everybody, it was very fun. And I'd be in the car with Nic, and I'd be like ummmm...? He knew that I didn't have a license... (imitating Cage) "C'mon, boy!" And someone else backed the car up.

MF: How much time did you spend in Portland for the production?

Wolff: A couple of months, but it felt like that's a huge moment in my life. That is a marker of a change in my just evolution as a person.

MF: What do you think you're going to take with you after working with Nic? Anything that's rubbed off, and you think, "Oh, I picked that up from him?"

Wolff: I literally feel like I was a different actor before I worked with him. It was as if I worked with him, and I was, every day, my brain was taking enormous notes and soaking them in like a sponge. So I thought that the next thing I did was all an amalgamation of things he taught me. I just feel like he taught me everything that I know, and I feel like that may happen a few times in my life, where to boil it down to one thing would super minimize what I got.