The director also talks about casting Udo Kier and shooting in Sandusky, Ohio. 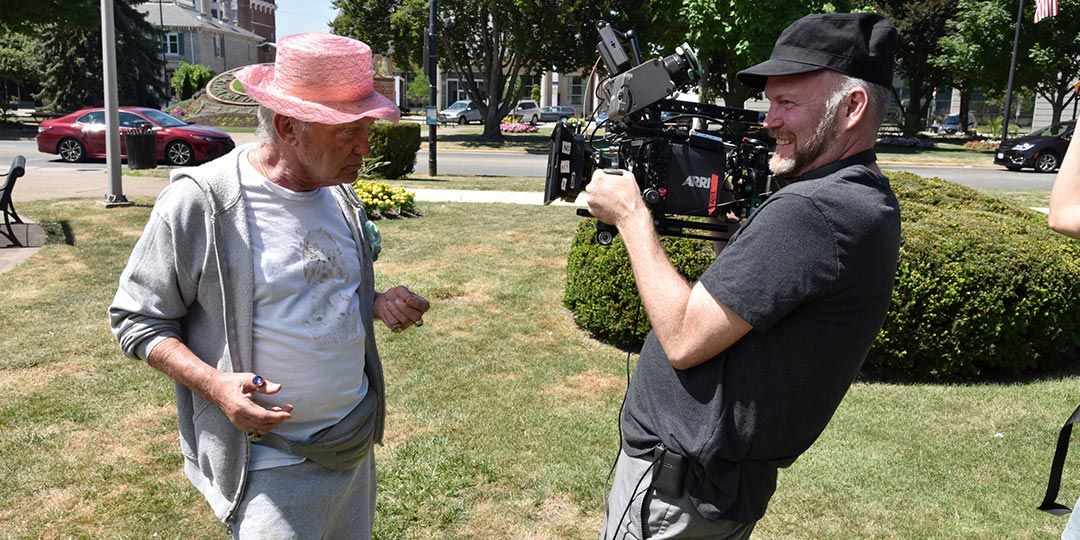 Udo Kier as Mr. Pat and director Todd Stephens on the set of 'Swan Song'

Todd Stephens’ new movie ‘Swan Song’ tells the story of Mr. Pat, a retired hairdresser in the small town of Sandusky, Ohio. This is the third movie that Phillips has set in his hometown of Sandusky, and veteran German actor Udo Kier plays Mr. Pat. Phillips talked to us about his new movie.

Moviefone: There was a real Mr. Pat, right?

Todd Stephens: Oh yeah. I mean, he was a legendary figure in my hometown. Just like he is in the film, he did all the fabulous women in town in the 60s, 70s, and 80s. He did the hair for this one person who is still alive, named Jackie Mayer, who became Miss America. And Pat helped create her for the Miss Ohio pageant. But he was really different. He looked like an alien almost being down into Sandusky, Ohio, which is where I grew up. And he always had the courage to be pretty outrageous. He was a pretty, he was like a rock star in a way, downtown. And so I would ride my bike down there when I was a kid. And I would always get excited when I would see him. It was like seeing a celebrity.

And it was my first exposure to queerness growing up. And so he always was like an idol to me. And when I got up the nerve to go to the Fruit and Nut Company, which was our actual gay bar. First time I went, he was there, and I felt like it all made sense and that I was home, and that I had found my tribe. So even though I never really knew Mr. Pat very well, but he really, like Michael Urie says in the film, he really did have a huge impact on my life.

MF: There is a moment Mr. Pat and Eunice talk about how different the world is versus when they grew up. And I know you're of a different age, but I have to imagine you've seen a bit of that yourself.

Stephens: Yeah. I mean, back when I was that age too, or back when I was younger, I couldn't hold my boyfriend's hand on the street or kiss him, or... I actually met my husband in that gay bar, and we're still together centuries later. But Tim and I couldn't have been outward gay in public. So we needed those safe spaces, like the Fruit and Nut Company. And those places are almost endangered or disappearing. I guess because younger generations don't need the same space in the way that we did. And so I was trying to spark a conversation about that because I think it's amazing that we can be ourselves, even in a small town like Sandusky, on the street now. But there's a loss of this secret world that was fabulous.

And it was fun to be other and different. I mean, in a way maybe it was hard too, but it was like you felt like you were part of a family, a chosen family that not everybody knew about. And that family was so tight. You know what I mean? Because we had to be. And that family is gone now, in my town anyway. There's still kind of a gay bar. It's mostly not even gay anymore. They have drag shows. But the gay community has melted away and dissolved into the rest of society. And it's amazing and sad at the same time.

MF: It almost feels like there needs to be, like we have in LA where an organization will mark buildings or spots of cultural significance, something specifically for the queer community to landmark buildings that otherwise nobody would necessarily pay attention to.

Stephens: Yeah, exactly. I mean, exactly. We need to start making some plaques and shit!

MF: It sounds like it was a really collaborative effort between you and Udo. With somebody who's got a career like his, who's been around for so long,  what's on your mind collaborating with someone who's literally been doing this for decades?

Stephens: Yeah, exactly. You know what? I didn't think too much about that because I would get freaked out if I did. You know what I'm saying? And the other thing was that he and I just connected so well and just became, just had this natural rapport, or we're on the same page about everything that I just didn't allow myself to get too psyched out. If you really think about all the amazing directors that he's worked with and amazing films, you could get in your head and be like, "Aah!" But I just try to keep it cool. And I also knew that I was giving Udo a real opportunity in a way that was different than other things that he had done. And to finally really let him show the full range of what he can do and show how he's, in my opinion, one of the best actors on the planet. And the performance that he gives in the film is so natural and so real that I'm just so proud that it happened.

And it was a little bit of a risky casting move because he wasn't the first person that I thought of because he's got a German accent, and he's so often a killer, evil or whatever. And so it was a bit of a leap of faith that, once I met him, I knew when I saw the real Udo. And his dog's named Liza Minnelli, and he's a gardener. You know what I mean? I knew that it was perfect, but still, sometimes you overthink things. It's like, "Well, why does he have a German accent and stuff?" Who cares. You know what I mean?

MF: This movie gives us little hints into a world that straight people might not know about you these little hints, like the discussion about the safe spaces, or whatever hair product Mr. Pat was mixing up, using-

MF: Is that a real thing?

MF: Udo has said that he insisted as much as possible you shot this chronologically. Does that present a challenge for you? Or is that difficult?

Stephens: Normally, it's just impossible. Because let's say you have a bar scene that takes place at the beginning, middle and end. You have to shoot all of that in one day. You just have to. But it just so happened that with this movie, because he goes from one place to the other and never comes back to anything, that it was possible to shoot it in sequence. So he kept saying that to me every time I talked to him. It's like, "We've got to shoot in sequence and start at the nursing home. Can we start at the nursing home?" And I told my AD and stuff, that that was very important, and it worked pretty naturally. And I really do think that that helped both of us to make everything more real. Udo says, "Had we shot the chandelier scene at the beginning of the movie, it just wouldn't have worked. It wouldn't have been the same." So he really was on that journey throughout the shoot. And that's part of why I think it works so well.

MF: You bring in Jennifer Coolidge, but you don't do what everybody else does with her, which is to bring her in for a couple of scenes that she totally steals, leaving a mark on the movie. Instead, she's a real person in this town. How did you work with her on this role?

Stephens: Exactly. She was actually, she loved the script so much, and it really touched her, but she actually wanted to play a different part in the script. And because she's not used to being the bad guy or the heavy. And I think, she's always like, "I'm always the girl, the woman that everybody loves." And so I think it took her a little while to wrap her brain around it. But I was like, "Come on, let's do something different. Let's push it. Let's show another side of you." And ultimately, she fully embraced that. And I mean, I'm just so proud of what she did in the film because she's still funny, but there's also a sadness or just another dimension that I've never really seen from her. Although now I'm watching 'White Lotus,' and she's so brilliant in that.

But I just feel like there's so much that woman can do that we haven't even fully seen yet. So I'm really proud. I mean, and I have been obsessed with her ever since I saw 'American Pie.' It's like, if there's one person I would want to work with, who would it be? Jennifer Coolidge. And so it was a dream come true to have her shooting a movie in my hometown with her.

MF: There's a great warmth to this, where we get to laugh with Mr. Pat, for instance, when he's at the other salon and gets the hat. And yet there's a real emotion, too. By the time we get to the end of the movie, as an audience member, I feel like I am losing someone that I have real affection for. As a writer, how do you balance putting the laughs in versus keeping the emotion real? And is that a fine line to walk, or is it just this is the story, and you let it take you where you go?

Stephens: Let it take you where you go. I mean, I never, when I was in film school, I thought I was going to make horror movies. So then I wrote 'Edge of Seventeen,' my first movie, and people were laughing at certain things in it. It also was touching, but there were funny things. And I don't know. It just seems to come through. I don't try too hard to do shtick or anything. But somehow, I guess I find humor in things. But also keep it balanced. I like this happy, sad kind of vibe, almost like a Robyn song, Dancing On My Own. It's like, you feel joyous and so happy, but there's something... It's almost like you're on the dance floor dancing, but tears are coming down your face. And I don't know. That combination, it's just, that's what I love. So yeah, I try not to overthink it, though.