‘Ghostbusters: Afterlife’ recaptures most of the magic from the first film, with fantastic new characters and some old familiar faces

As the fourth installment of the franchise, it should win back hardcore fans who have become disinterested in the series, but it is basically beat-for-beat the same movie as the original. 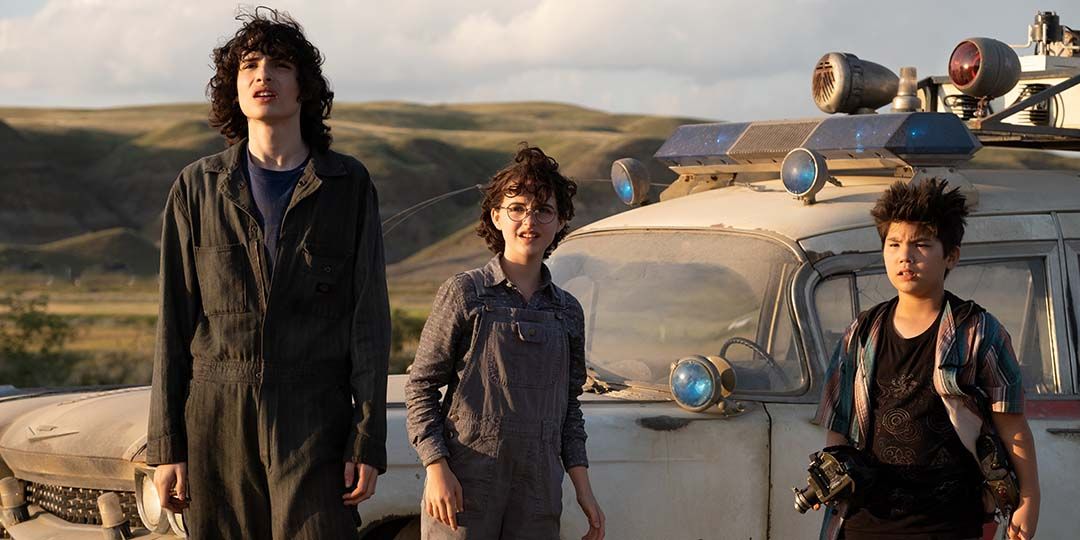 Opening in theaters on November 19th is ‘Ghostbusters: Afterlife,’ which is the fourth film in the franchise and a direct sequel to ‘Ghostbusters’ and ‘Ghostbusters II.’ Written and directed by Jason Reitman (‘Up in the Air’), son of the original film’s director Ivan Reitman, the new movie is set over 30-years after the original and follows a group of kids in Oklahoma who discover their town is plagued with ghosts and that they have a mysterious direct connection to one of the famed Ghostbusters. The new film stars Mckenna Grace (‘Captain Marvel’), Finn Wolfhard (‘It’), Carrie Coon (‘Avengers: Infinity War’), and Paul Rudd (‘Ant-Man’), as well as Bill Murray, Dan Aykroyd, Ernie Hudson, Annie Potts and Sigourney Weaver reprising their roles. The result is a really fun movie that has fantastic new characters but relies heavily on nostalgia and basically copies the first film’s plot.

After she is evicted from her apartment, Callie Spengler (Coon) movies her kids, Phoebe (McKenna) and Trevor (Wolfhard), to her recently deceased estranged father’s abandoned home in Summerville, Oklahoma. The town is experiencing unusual daily earthquakes, while Phoebe and Trevor adjust to their new life. Trevor gets a job at the local burger joint, so he can be closer to Lucky Domingo (Celeste O’Connor), the girl he likes who is also the Sheriff’s daughter. Meanwhile, Phoebe goes to summer school and makes a new friend, Podcast (Logan Kim), a young boy obsessed with recording everything. Trevor and Phoebe are discouraged by their mother to learn about their grandfather, who they never knew, but eventually Trevor discovers and begins to repair the Ecto-1, while Phoebe finds a hidden ghost trap beneath the floorboards of their house.

Phoebe takes the ghost trap to class and her teacher, Mr. Grooberson (Rudd) explains the history of the Ghostbusters and everything that happened in New York in the 1980s, as they are completely unaware. Phoebe soon realizes that her grandfather was Egon Spengler, a member of the Ghostbusters. When a green ghost appears in Summerville, Phoebe, Trevor and Podcast use the Ecto-1 and a Proton Pack found in Egon’s hidden laboratory to capture the ghost but destroy half the town in the process and are arrested by Lucky’s dad. After a date with Mr. Grooberson, Callie picks her kids up from jail and tells them the truth about her father, that he was crazy and had turned his back on all his friends and family years ago. Believing that her town is about to become ground zero for the apocalypse, Phoebe calls the only people she thinks can help … the Ghostbusters. But with the team disbanded, it’s up to Phoebe and Trevor to follow in their grandfathers’ footsteps, along with Podcast and Lucky, and “suit up” to defeat the ghosts and ghouls plaguing their town.

There are a lot of fun Easter Eggs in ‘Ghostbusters: Afterlife’ that I want to try and not spoil, but surprisingly the best part of the film are the new characters and fresh setting. Mckenna Grace is absolutely captivating and creates a fun and rich character in Phoebe. She carries the emotional thrust of the film and builds a character that you want to follow and see more of in the future. Equally, Finn Wolfhard is super fun as Trevor and has great charisma and onscreen chemistry with Celeste O’Connor’s Lucky. Rounding out the foursome is Logan Kim’s terrific Podcast, who makes a great sidekick to Phoebe. In fact, the kids are so great in this film that you don’t really care when the original Ghostbusters show up, and that is part of the problem. Jason Reitman’s script works so well introducing us to the Spengler kids and the town of Sommerville, that it almost seems anticlimactic when Murray, Aykroyd and Hudson appear, which is not really a spoiler since the three actors have been doing press for the film.

Another issue I have with the movie is that, other than a new cast and a fresh environment, the movie is almost exactly the same as the first, pretty much beat-for-beat. I’d say it is kin to ‘Star Wars: The Force Awakens’ in that sense, which is not a bad thing per se. I’m a longtime fan of the ‘Ghostbusters’ franchise and I definitely think this is the best film since the original, but it would have been nice if the basic plot was slightly different. It’s still great to see the “big three” when they do appear, and their appearance does not overshadow the kids. There is also a wonderful tribute to the late great Harold Ramis in the film, which I won’t spoil, but just say that it was done very tastefully and handled better than, for example, Carrie Fisher’s inclusion in ‘The Rise of Skywalker.’ There are a few other cool cameos in the movie, as well as an all new version of the fan-favorite Slimer, and mini-Stay Puft Marshmallow men, which I thought was a fresh take on an old concept.

Jason Reitman was definitely the right person to lead the franchise in this direction, and with the fun new characters he has definitely created something I would like to see more of, but in future installments hopefully it will be less reliant on the same old formula. Carrie Coon is strong as Phoebe and Trevor’s mom, struggling to get by and holding deep resentment for her own father. She also has great chemistry with Paul Rudd, who as always is adorably fun to see on screen. Rudd plays his character of Mr. Grooberson with hilarious enthusiasm, and you get the idea that the actor is having as much fun being in a Ghostbusters movie as his character is fighting ghosts. There is a clever twist with Callie and Mr. Grooberson’s relationship, that I have to admit I saw coming, but it still works within the context of the film. In the end, while it’s not as original a movie as you may have been led to believe, Jason Reitman still has found a way to breathe fresh life into the franchise his father created, establishing great new characters for a new generation of fans in a fun and entertaining, yet nostalgia-heavy film.

'Ghostbusters: Afterlife' receives 7.5 out of 10 stars.

When a single mom and her two kids arrive in a small town, they begin to discover their connection to the original Ghostbusters and the secret legacy their grandfather... Read the Plot