Trending
’The Batman’ The Bat and The Cat Trailer
’Doctor Strange in the Multiverse of Madness’ Trailer
’Spider-Man: Across the Spider-Verse (Part One)' Teaser
’Uncharted’ Trailer #2
January 14th, 2022 - by Marya Gates 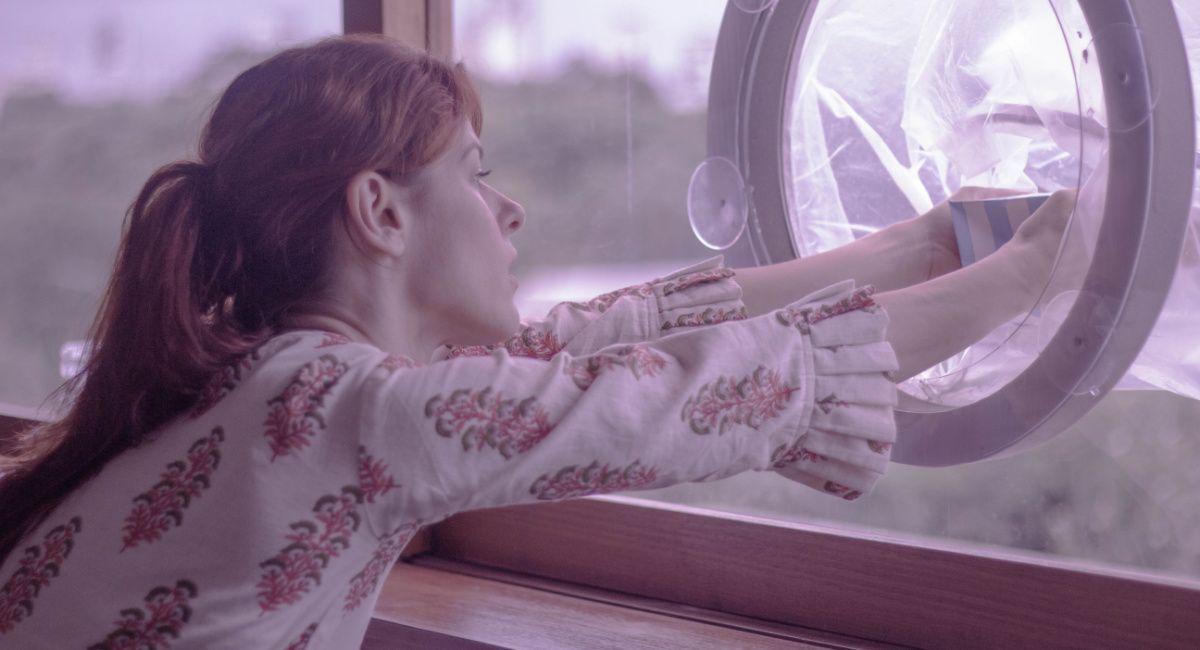 Welcome to Female Directors, which features interviews with female directors and recommendations for films directed by women each week. This week, Iuli Gerbase talks about her feature film debut, ‘The Pink Cloud’ and recommends ‘Good Manners’ from fellow Brazilian director Juliana Rojas.

Born in Brazil, writer-director Iuli Gerbase studied filmmaking and creative writing and started making films at just twenty years old. Her short films have been selected to play at festivals all over the world, including the Toronto International Film Festival and the Havana Film Festival. Her debut feature film ‘The Pink Cloud’ had its world premiere at the 2021 virtual edition of the Sundance Film Festival.

Written years before the global pandemic put many of us in lockdown, Gerbase’s prescient sci-fi thriller ponders the effects of prolonged quarantine through the lens of two strangers forced to build a life together. Giovana and Yago meet and have what they think will be a one night stand, only to discover the next day a deadly pink cloud has appeared in the sky. It kills people within ten seconds, forcing the world’s population to stay indoors. We follow Giovana and Yago as they change after years in this unbearable situation.

Despite being conceived in 2017, Gerbase’s psychologically incisive film takes on even deeper layers when viewed in a current semi-quarantined world. As ethereal as it is emotionally raw, ‘The Pink Cloud’ explores our deeply rooted need for interpersonal contact, the limits of internal strength, and what happiness and personal freedom really mean when societal expectations erode.

‘The Pink Cloud’ is in select theaters now and will debut on VOD March 1st, 2022.

"Any resemblance to actual facts is purely coincidental"
Not Yet Rated1 hr 45 minJan 29th, 2021

Giovana and Yago are strangers who share a spark after meeting at a party. When a deadly cloud mysteriously takes over their city, they are forced to seek shelter... Read the Plot

Moviefone: You wrote this film way before the pandemic. Where did the inspiration originally come from and what you were trying to explore?

Iuli Gerbase: My idea was showing the journey of this couple that had just met, and their idea was having just one night together. Then the next morning, this crazy, toxic pink cloud comes and they have to be in this forced marriage. We see their journey trying to get along, trying to get to know each other, and then dealing with the situation for years.

I wanted to explore how they react differently to the cloud. How it affects Giovanna and what’s difficult for her, and how it affects Yago differently. I never thought we would have a similar pandemic a year after we filmed it.

MF: Much of the film’s life has been after the pandemic started. What sort of themes do you think in the film have been heightened by the experiences we're going through as a global community?

IG: I'm happy to see many reviews, and also people commenting online, that they can see other layers in the film, because my fear was now it was going to be "The Pink Covid," because everyone will just think about the pandemic. For me an important layer of the film that people are taking notice of is what the cloud represents to Giovana and the idea that the cloud is pink for a reason. Pink is the color that we as babies tend to wear; boys wear blue and girls wear pink.

MF: As someone who quarantined alone, I related a lot to Giovana’s friend Sara, who was unfortunately completely alone when the cloud arrived. Obviously, you couldn't imagine that was going to happen , but the way that you characterize that journey for her was really smart and incisive. How did you develop that character?

IG: I had just started a TV series with many children over a month and when it ended, I went to my house where I lived by myself. For me going from being around forty children to nobody around, it's a shock. In the film, Sara was a teacher who works with 90 kids per day, every day for years, and then being alone is a total shock. It’s very hard for her. That was our idea when we were talking about the background of Sara, and I love that scene, and I love Kaya Rodrigues who is the actress.

MF: Most of the movie is between Renata de Lélis as Giovana and Eduardo Mendonça as Yago. What were you looking for in casting these characters?

IG: I knew I needed actors who would trust me, and would be very dedicated to the project, because it is a hard task because the film is 90% them. So both actors I knew before we cast the film. Eduardo was in my first short film ever, that I made when I was 19. Renata has worked with me before too. They were friends who had worked together in theater and movies. So we were always connected.

We did rehearsals with the children, and we did rehearsals in the apartments. I knew that it was very important for them to be good, and they knew that the film depended a lot on them. They were very dedicated. I'm very proud of them. Also, I think I wrote the script thinking about them, so there is a little Eduardo in Yago and a little Renata in Giovana. They understood that as well during the shooting, like how they related to the situation, and how they related to the children. So it was an amazing process with them.

MF: Most of the film takes place in a two-story apartment. How did you shoot this?

IG: It was a real apartment, not a studio. I think that that helped the actors too. We shot over four weeks. The first week was the supporting actors and then three weeks with them in the apartment. When we were choosing the crew, it was like, okay, everyone has to be talented and professional, but also a nice person. Because I don't want to be three weeks in an apartment with someone who’s in a bad mood all the time or, you know, angry or shouting.

I wanted parts of them to be comfortable so that Yago could be okay with the situation and Giovana not okay. If they were in a small flat, I think they would kill themselves after one year. I needed an apartment that was comfortable and had space, even knowing that is not the reality for most Brazillians. We also discussed how much the apartment would change when Lino is born. There are drawings on the wall and some things are kind of falling apart. Not too much, but you have to think how they would adapt these apartments to children during all the years that go by.

MF: Early in the film you hear about a character’s boyfriend who is trapped in a bakery, as well as other places where people were stuck. What were you thinking as the filmmaker about the world outside of this apartment, and how did you decide what parts of it would filter in?

IG: For me, one of the main themes is isolation and how much you choose to be isolated. There is a fight where Giovana tells Yago that he doesn’t want to know about anything and he doesn’t care about what is happening outside the apartment. And he says she’s too paranoid and obsessed with reading the news. A big part for me was exploring how much do you choose to isolate yourself? The supporting characters give us some clues of what's going on outside.

We keep imagining how they are, but I think if we were with them all the time it would be even harder to watch than what happens with this couple. If you think about what is happening outside the apartment, it’s darker. So my idea was to create this universe with some clues of what's going on outside, and if you really think about it, you think, “oh this is terrible.” But if you want, you can also not think about it. I tried to provoke viewers to think about how much they would care about what's going outside the apartment.

MF: The scene in the kitchen, where she can barely speak to her son because she knows his future is bleak, and Yago wants her to focus on now is really powerful. It makes you think about what we’re leaving the next generation, and how some people don’t think like that.

IG: That scene can be related to having kids during this climate change situation, and also now the pandemic. I don't have children yet. I think that I will, but I'm not 100% sure, and one of the things that makes me hesitant is climate change. If you’ve seen the news from Brazil now, the rains and the floods, it's scary.

There’s documentaries about how it's getting worse. How do you bring a child in this situation? At the same time, many people still want to get pregnant. Some people are hopeful that it will get better and we will do what is necessary for us to survive. But it is difficult, and for me, I relate to Giovnna in that way of thinking, but aren't things getting kind of crazy?

MF: What do you hope people take away from the movie when they finish watching it?

IG: When people ask me what is the message? I'm like, I'm not a priest. There is no message. But I do want people to take away things. I'm happy people are able to relate to it. I would like people to think about what is their notion of freedom and happiness, and that it's not the same for everyone. Is there something that they're doing because they feel that they have to?

MF: Is there a film directed by a woman that either inspired you to make movies or that you just really love and think people should see?

IG: I would say ‘Good Manners (As Boas Maneiras)’ by Juliana Rojas. It is fantasy and it is crazy. I love it. I really respect her as a director.

Brazilian filmmaker Juliana Rojas studied cinema at the School of Communication and Arts of University of São Paulo where she met co-director Marco Dutra. Discovering they both shared a love of horror and musicals, they began co-directing films together. Their short film ‘Lenço Branco’ was selected as part of the 2004 Cannes Film Festival’s Cinéfondation, which is a celebration of student films.

‘Good Manners’ follows a woman named Clara (Isabél Zuaa) who takes a job as a housekeeper and nanny for a rich woman named Ana (Marjorie Estiano), As the film progresses Clara releases that there is a secret behind Ana’s pregnancy that will change her view of the world forever. Equally inspired by traditional horror tropes and local mythology, Rojas and Dutra craft a spellbinding fantasy world that also works as critique of modern Brazilian society.