Kat Coiro directed the movie, which opens in theaters and on Peacock February 11th. 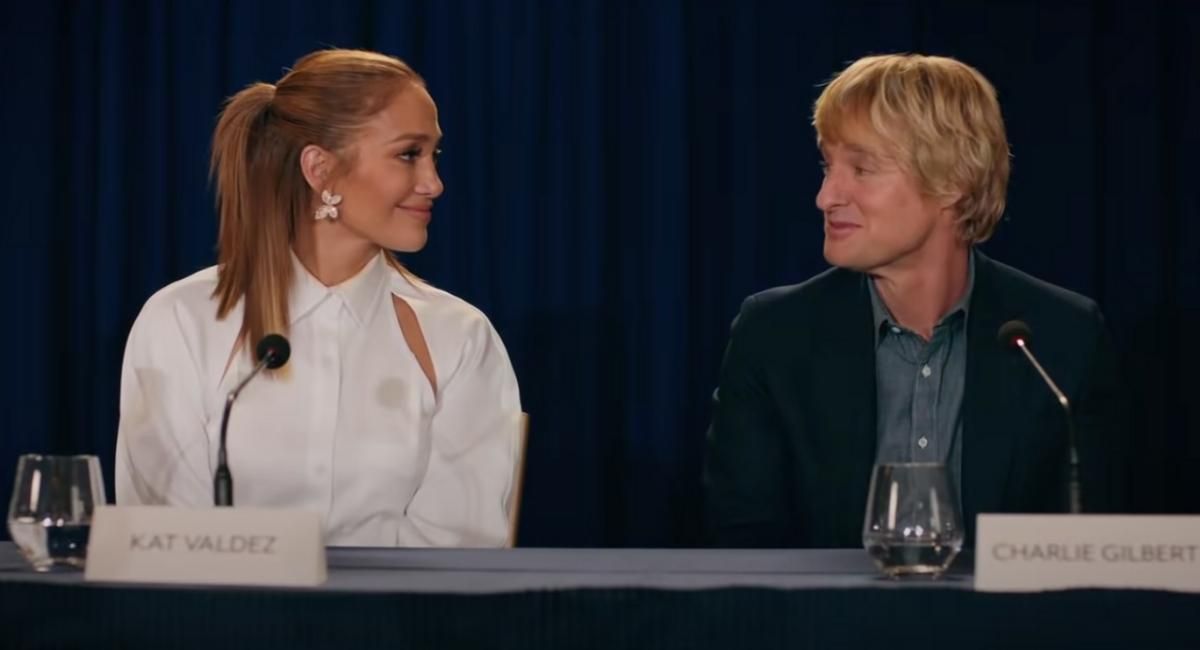 (L to R) Jennifer Lopez and Owen Wilson in 'Marry Me'

‘Marry Me’ is looking to capture some love this coming Friday as Valentine’s weekend kicks off, pairing Jennifer Lopez and Owen Wilson as a seemingly mismatched couple who meet under unusual circumstances.

The movie, directed by Kat Coiro, opens as Kat Valdez (Lopez) is half of the sexiest celebrity power couple on Earth with hot new music supernova Bastian (Colombian singer Maluma). As Kat and Bastian's inescapable hit single, ‘Marry Me’ climbs the charts, they are about to be wed before a global audience of their fans.

Divorced high-school math teacher Charlie Gilbert (Wilson) has been dragged to the concert by his daughter Lou. When Kat learns, seconds before the ceremony, that Bastian has cheated on her with her assistant, her life turns left as she has a meltdown on stage, questioning love, truth, and loyalty. As her gossamer world falls away, she locks eyes with a stranger, a face in the crowd: Charlie, awkwardly holding a sign reading “Marry Me”. In a moment of inspired insanity, Kat chooses to marry Charlie. What begins as an impulsive reaction evolves into an unexpected romance…

Lopez needs little introduction, given that she’s a musical superstar and actress who has appeared in movies including ‘Out Of Sight, ‘Hustlers’ and ‘Monster-in-Law’.

Wilson, meanwhile, has long established his comedic and dramatic credentials, working regularly alongside old friend Wes Anderson as both writer and actor, and has a lengthy resume including ‘Wedding Crashers’, ‘The Royal Tennenbaums’, all three ‘Meet the Parents’ movies and as the voice of Lightning McQueen in Pixar’s ‘Cars’ movies.

Lopez first crossed paths with her ‘Marry Me’ co-star Wilson in 1997 creature feature ‘Anaconda.’ ‘Marry Me’ promises to be a very different experience.

The two popular actors recently spoke at a virtual press conference about the new film, here is what they had to say.

Jennifer, you play musical superstar, Kat Valdez in ‘Marry Me.’ Who is she in your eyes? How does her life change from the moment she decides to follow the impulse to marry a stranger?

Jennifer Lopez: In my eyes, Kat Valdez is a very kind of self-assured, recording artist veteran in the industry who has built herself and her life into something that she's proud of, but it also, in a way, because of her personal life has become a bit unsatisfying. I think for her there's a beautiful journey here. Once the character that Owen plays, Charlie, comes into her life, it really changes it forever. Changes her perspective, changes her ideas of being caught.

Sometimes you feel you are kind of caught like, "Okay, I'm trapped in this fame. I'm trapped in this life. This is all I can do. I really don't get to have a life like everybody else or love like everybody else." I think what Owen’s character teaches her is that she can and that it is possible and that there is hope for her. She could have a real love and a real home, which she's never had.

How much of Kat is in you and how much of you is in Kat, Jennifer?

JL: I think there's a lot of us in each other. This wasn't a role where I had to research what it was like to be a famous recording artist who does branding and who has all of that. I understand what all of that is already. I think the difficult part was the meta part, which was the idea of showing what it's really like inside my bedroom. When something goes wrong and you suffer a heartbreak like this in front of the whole world, and the media goes to town on you to kind of unearth the story and understand it and poke fun at it.

In some of those moments, even with scenes with me and Owen, where he's asking, "Don't, you want to just give up on the whole love thing?" It was just that philosophy that she has. I understand it's like, "No, if there's a one in a billion chance, no matter what the numbers are, you're a math teacher, that's worth it," because I think what she has craving is that love and that home. So, there was a lot of moments there where I was able to bring a truth to the character in the emotional life that was authentic and real.

Owen, How do you see the character of Charlie?

Owen Wilson: Charlie's sort of ordinary, I guess that would be sort of a man of the people. Then Bastian is this singing sensation and engaged to Kat Valdez. Through circumstance somehow, I wind up there at the concert. The next thing you know I'm on stage getting married. It's such a leap of faith that when you read it, you are kind of, "Oh, I wonder how that's going to work?" Yet, in the movie, sort of everything that leads up to it, I think you kind of go along with it. I felt it was kind of believable.

Music of course is a key element of the movie, Jennifer. Can you talk about the experience of making an album and a movie at the same time?

JL: That was a first for me, which was such a pleasure. It's like my two worlds coming together, but making the album, it was great because they really allowed me to input into where and when and what these musical moments would be for this character. They really looked to me to be like, okay, how would this be? How could we make this feel real? Picking the music for the arc of the characters says, nobody understood the character more than I did. Nobody understood what it was to be a musical art artist and be this person within this movie.

Owen, how was your experience with Jennifer this time around?

OW: For me, it was very relaxing. It was nice because Jen assumed so many responsibilities, I didn't have to worry about anything. She and Elaine (producer Elaine Goldsmith-Thomas) had to bear the brunt of the stress of everything. A lot of times when you work on a movie, you kind of hear it in your head or you have casting ideas. With this, everybody was just spot on. I wasn't worried about anything. I felt that it was working while we were doing it.

(L to R) Jennifer Lopez and Owen Wilson in 'Marry Me'

You were mentioning before how Charlie's this normal guy, and the movie really plays into the idea that opposites attract. Do you believe that in real life?

OW: Well, to an extent. I think opposites attract in a sense from different backgrounds and seemingly very different. But I think in terms of your spirit, I think there must be some sort of overlap either in humor, or the way you look at the world, or what you're curious about, or sense of adventure. So, in those ways I think sometimes it helps to have a little bit of overlap for that attraction to work.

Jennifer, you've starred in some memorable romantic comedies. Is this a homecoming of sorts for you and do you have a special place in your heart for that genre?

JL: Yes, I do. I think that's why I've done so many throughout my career. It's because I, as a moviegoer, love romantic comedies. Those are some of my favorite movies of all time, whether it's ‘When Harry met Sally’ or ‘Prelude to a Kiss’ or any of these types of movies, the Meg Ryan era, and the Julia Roberts era, all those movies is what I grew up on. I love them so much.

So, it is kind of a homecoming for me because I haven't done one in a few years and now I have two coming out. I have this one, ‘Marry Me’ and then ‘Shotgun Wedding’ will be out at some point, which I did with Josh Duhamel. So, I'm excited to be able to do a couple.

Is there a certain element in a romantic comedy script that makes you want to say yes to it, Jennifer?

JL: I think it's hard to reinvent it every time. How do you make it different than the last one? Because we kind of always know that two people are going to wind up together and that's going to be the end. So, it's about how interesting the journey is and the interaction between the two characters and how interesting that is. If that's written well, that's what makes me want to do it.

Jennifer, Marry Me has some unforgettable songs. Do you have a favorite one?

JL: It's hard. I mean, off the top of my head, I love ‘Nobody's Watching Us.' I love it so much because I really relate to it. ‘On My Way’, for me is such a life song. It's one of those perfect sentiments in a song. Yes, it fit well in the movie, but I just thought it was a song that everybody could relate to because we all feel like the mistakes we make are so tragic in our lives.

This is so hopeful because it says that every single mistake that I made was leading me down a yellow brick road to exactly where I needed to be and where I wanted to be, and I do believe in that in life. So, I would have to say, if I had to pick a favorite child, which I would never do, it would be, ‘On My Way.’

OW: I think, for me, I did not study acting. I was an English major, but I always loved movies and I liked writing. So, when my friend and I started writing a movie together, believing that I could act in it, I don't know that I did necessarily. It was more my friend's belief that I could do it. Because growing up in Dallas, if you had said, ‘Oh, I want to be in movies,’ I think people would've almost laughed at you like, "Yeah, who doesn't want to be in movies?" But I think that believing that I could maybe have a career doing something creative, that's not the life that most people lead. So that was a leap of faith.

‘Marry Me’ debuts in theaters and streaming on Peacock February 11, 2022.