Why James Gunn’s ‘Peacemaker’ Was One of the Most Satisfying Shows of the Year!

With Season 2 newly commissioned, we look back at the successful first season and ahead to what could be next. 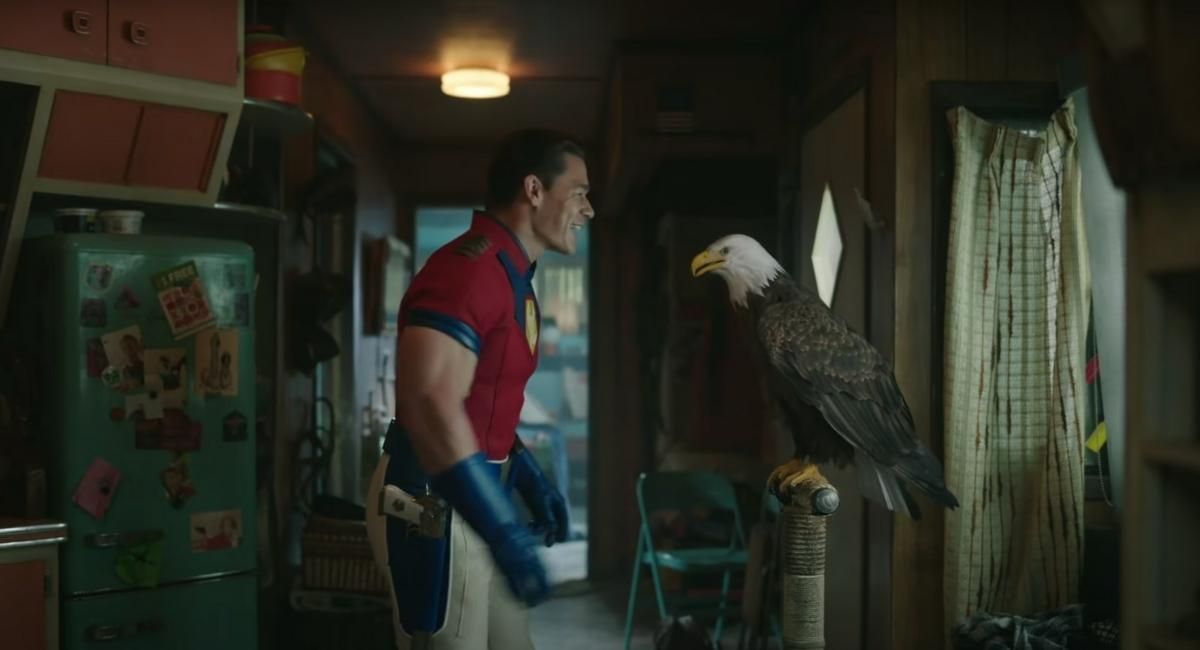 It took a remarkable amount of confidence for writer/director James Gunn to announce a spin-off from ‘The Suicide Squad’ based around John Cena’s Christopher ‘Peacemaker’ Smith, the numbskull vigilante whose entire credo is peace through any means – even if those means are killing anyone or anything he deems necessary.

Peacemaker wasn’t the most popular character on the ‘Squad’ crew, but, played with relish by Cena, he certainly made an impact, and Gunn hinted at more to come when the character survived near certain death.

‘The Suicide Squad’ itself didn’t do that well at the box office, partly due to the pandemic and because of its day-and-date launch on HBO Max. And when Gunn confirmed the series was in the works, plenty of people questioned the need for a show based around the character.

How wrong they were. As it turns out, ‘Peacemaker’ is one of the more satisfying series of the year so far, and streets ahead of even some of the recent Marvel and Lucasfilm offerings.

Picking up as Smith is released from hospital, the show sees him thrown into a new mission, this time dealing with a threat from alien bug creatures that have taken over humans for their own ends.

Peacemaker is – somewhat unwillingly – teamed up with Emilia Harcourt (Jennifer Holland) and John Economos (Steve Agee), who we met in more headquarters-bound form in ‘The Suicide Squad’. This squad is led by Clemson Murn (Chukwudi Iwuji), a special forces operative who has little time for interaction with his team. And then there’s the new recruit, Leota Adebayo (Danielle Brooks), who seems completely unprepared for the task in hand, but has a secret – she’s the daughter of ‘Squad’s Amanda Waller (Viola Davis), and a hidden agenda.

Tagging along are two of Peacemaker’s friends – pet and best pal Eagly (a fantastic CGI creation who has all the personality and humour you’d expect from a James Gunn project, even if he can’t talk) and Vigilante (Freddie Stroma), a cheery sociopath who enjoys killing people if he thinks it serves justice… Or just because.

This team, which redefines the term “rag-tag” must investigate and stop extra-terrestrials nicknamed “Butterflies” that have their own plans for humanity. Oh, and then there’s Christopher’s father, Auggie Smith (a foul-mouthed Robert Patrick), who is a racist, scheming White Supremacist who constantly belittles his son. These various sides will come into serious conflict – and not everyone will make it out alive…

‘Peacemaker’ works so well because Gunn has been given free rein to indulge his creative side, pushing the boundaries of what is acceptable on a superhero show, or indeed any TV series.

But far from simply being vulgar, bloody, and violent, the show is a potent combination of everything Gunn does so well. The humor and action are both excellent, but secondary to character growth. Every single member of the cast gets moments to shine – this is not simply Smith’s show. And everyone enjoys a complete character arc that finds them evolve and grow as the plot trundles along.

Gunn said when the show was originally revealed that he was looking to dig under Peacemaker’s helmet to find the man beneath, in a way that isn’t possible in a movie. And he certainly lived up to that claim – with Cena throwing himself into the role (literally, on occasion), Christopher Smith proves to be a far more complex person than the slaughter-happy idiot we meet in the ‘Squad’ movie.

He’s burdened by serious daddy issues thanks to Auggie’s toxic parenting, and still haunted by accidentally killing his brother (again, really his father’s fault). He starts to realize that his bullying, smug attitude is drawn from this background and begins to figure out how to be a better person.

Murn is a tough nut to crack, but Iwuji gives him layers, particularly later, and obviously left an impact on Gunn, who cast him in ‘Guardians of the Galaxy Vol. 3.’ Brooks, best known to date for Netflix’s ‘Orange is the New Black’ shines as Adebayo, thrust into a world she’s (mostly) unprepared to handle, she figures out her place on the team and bonds with Smith over their shared parental problems.

Holland’s casting was controversial since she dates Gunn in real life, but anyone trying to cry nepotism need to take a long, hard look at themselves – freed from the confines of her ‘Squad’ duty, Holland really works as Harcourt, letting her initially chilly side melt as she interacts with her colleagues. Similarly, Agee is handed plenty to do than simply play a nervous nerd behind a computer, coming into his own heroic side with occasionally violent results.

Stroma, meanwhile, doesn’t see his character change all that much, but that’s because Vigilante (real name: Adrian Chase) is so entertaining as a clueless goofball that to alter him might upset what makes the man work. Yet he also has a great arc that finds him drawing closer to the rest of the gang.

And then there’s Eagly, who is both a comedic gem and the beating heart that keeps Peacemaker grounded (even as he flies).

Yet the character work also extends to the supporting cast – Annie Chang’s endlessly miffed cop Sophie Song has a great line in insults, particularly for Auggie, and she’s backed up by gung-ho partner Fitzgibbon (played with a sweet nature by Lochlyn Munro). And when we finally meet the leader of the alien threat, they’re not simply a scheming, mustache-twirling villain (partly because they don’t have a mustache).

Along the way, there is so much to enjoy – hilariously rude riffs on other superheroes (Peacemaker has some seriously warped ideas on their behavior), some weird enemies (Christopher Heyerdahl as Police Captain Locke is a strange fellow even before he gets taken over by one of the alien bugs, and the performance clearly delighted his director, as he features in several extended moments) and some fun with rock and metal music. Oh, and seemingly in a dig at Marvel’s obsession with setting up other stories and characters, ‘Peacemaker’s end credit sequences only serve to add more jokes.

The path to the finale is a rollicking ride that never forgets to also have heart, and the last episode sticks the landing, with a couple of gigantic cameos that don’t feel out of place. Gunn skillfully weaves jokes and character touches into the story, and everything pays off at the end.

Though the first season ends with the threat largely vanquished and everyone in a very different place to where they started, the possibilities are endless for this series. Gunn wrote the entire first run and shared directing duties with Brad Anderson, Jody Hill, and Rosemary Rodriguez, but plans to handle it all for season 2.

If I were to guess as to what might happen? Peacemaker will continue his journey to become a better person (while still finding time to rock). Harcourt will become more of a leader. Adebayo will find more time for her wife (Keeya played by Elizabeth Faith Ludlow), and Eagly will continue to be the bright, shiny star of the series.

The entire series is now available on HBO Max. Be sure to watch the finale, as it features surprise cameos from several other popular DC Characters!