Tom Holland, Tobey Maguire, and Andrew Garfield Recreate that Famous Spider-Man Meme for ‘Spider-Man: No Way Home’s Digital Release. There was much pointing! 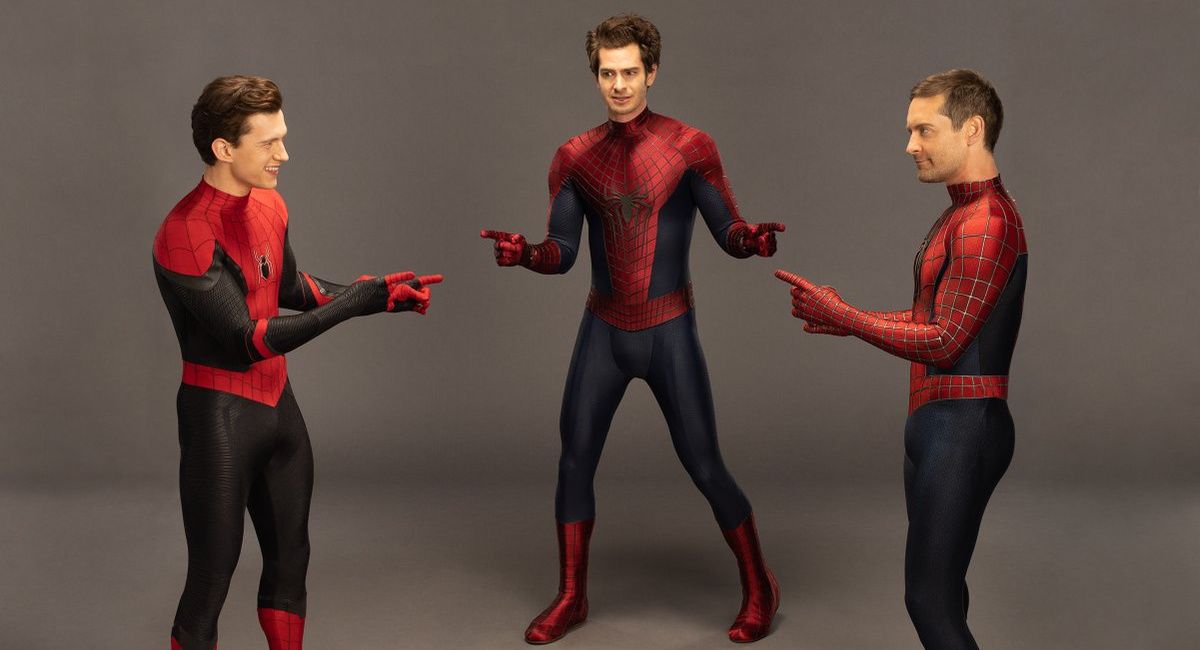 Even before ‘Spider-Man: No Way Home’ came out, one of the worst kept secrets in movies was the fact that Tobey Maguire and Andrew Garfield would show up to share the screen with current Spider-Man Tom Holland. (Apologies if you were trying to keep spoiler free on the movie, but we’re afraid it’s well and truly out there).

After months of trying to stop the news from leaking pre-release, Sony and Marvel are taking a very different approach as they announce the movie’s planned home entertainment arrival. How so? The companies tweeted out a picture of Maguire, Garfield and Holland recreating one of the most famous memes to hit the web (pun unapologetically deployed) – Spider-Man pointing at Spider-Man.

Just in case you aren’t familiar with this particular meme, the image originates from Episode 19b of the 1967 ‘Spider-Man’ cartoon, titled ‘Double Identity.’ In the story, the villain Chameleon impersonates Spidey to pull off an art heist. He replicates all of the hero’s abilities in order to force a showdown and to try and trick the authorities into arresting everyone’s favorite web-slinger. Suffice to say, Spider-Man shows up and pointing/fighting ensues. Find the clip below…

The meme itself first debuted in 2011 and became increasingly popular as a way to indicate similar things (there’s an example here). It even inspired the end credits scene for ‘Spider-Man: Into the Spider-Verse’, in which Spider-Man 2099 (AKA Oscar Isaac’s Miguel O'Hara), who meets another Spider-Man and comedy arguments about pointing ensues. You can watch that here…

It’s fitting for ‘No Way Home’, which sees Holland’s Peter Parker reeling after his secret identity is revealed to the world by J. Jonah Jameson (J.K. Simmons) and he’s framed for the death of Mysterio (Jake Gyllenhaal) in ‘Spider-Man: Far From Home’. Seeking a way to solve the problem, he consults Doctor Strange (Benedict Cumberbatch), who suggests a spell to make everyone forget that Peter is Spidey.

Trouble is, Peter’s attempts to make sure his friends and family don’t also lose their memories of his true identity end up causing problems for the spell, tearing open access to the multiverse, and leading to the likes of Doctor Octopus (Alfred Molina), the Green Goblin (Willem Dafoe), Electro (Jamie Foxx), Lizard (Rhys Ifans) and Sandman (Thomas Haden Church), who all appeared in different previous ‘Spider-Man’ movies.

It does, however, also let Holland’s Parker meet and team-up with Garfield and Maguire’s variants of the character, and there is much swapping of stories before they tackle the various villains.

This comes on the heels of word from Holland (while appearing on ‘Late Night with Seth Myers’) that one of the three Spider-Men wore a fake butt in their suit. “I'll give you a spoiler, and I'm not going to tell you who, but one of us has a fake a-- in their suit,” Holland said. "You can figure out that for yourselves.”

‘Spider-Man: No Way Home’ will be released on digital March 22, followed by a 4K Ultra HD, DVD and Blu-Ray disc release on April 12. Now we just have to wonder what other memes make it into release announcements. Probably this one.