The ‘Beauty and the Beast’ actor and ‘The Tomorrow War’ actress discuss playing John Dean and Mo Dean, respectively, in the new Starz series based on the Watergate scandal. 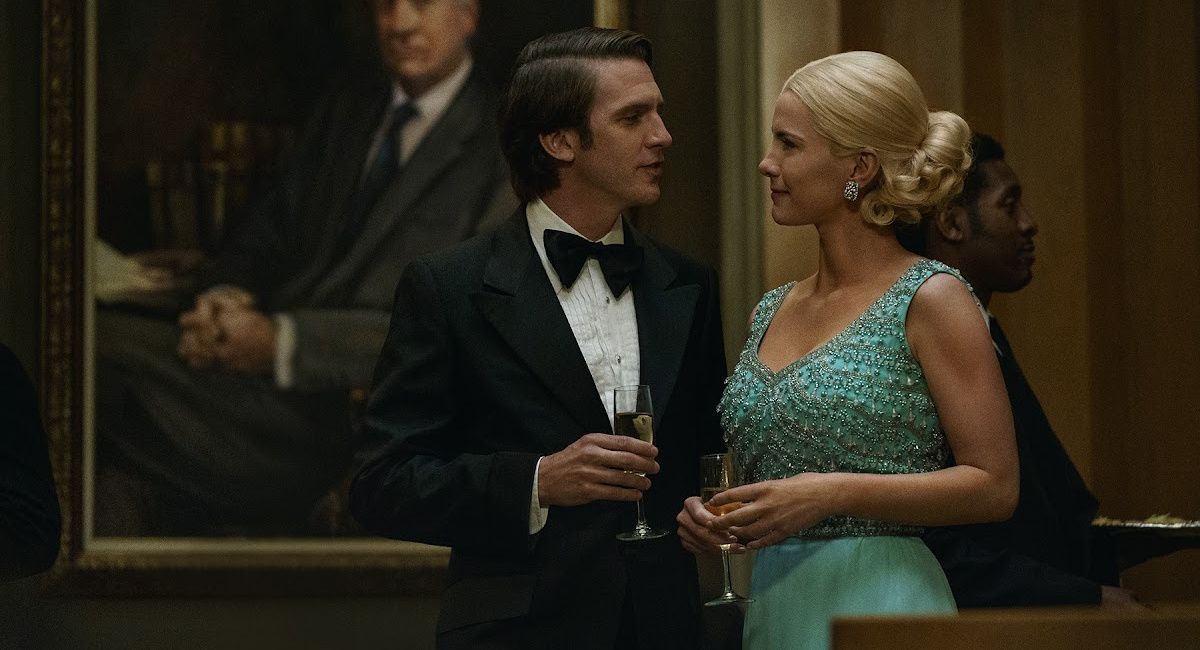 Premiering on Starz beginning April 24th is new mini-series ‘Gaslit,’ which is based on the podcast “Slow Burn” by Leon Neyfakh.

Moviefone recently had the pleasure of speaking with Dan Stevens and Betty Gilpin about their work on ‘Gaslit.’

You can read our full interview with Dan Stevens and Betty Gilpin below or click on the video player about to watch our interviews with Stevens and Gilpin, Shea Whigham, Darby Camp, and executive producer Robbie Pickering.

Moviefone: To begin with Dan, what was it about this project that interested you?

Dan Stevens: I think it was getting the chance to kind of explode a bubble of history that I knew a little bit about, but it's always fun when somebody lays out a series like this. The podcast that it was based on was utterly fascinating. My wife and I were gripped to that, just blowing up bubble after bubble of untold story corners of something that everybody thinks they know the bare bones about.

It's really cool when you get to see something laid out in a different way that really kind of changes your perspective on things. I always enjoy that as a listener or a viewer. You come away thinking, "That's not how it was told to me at all." It's a very refreshing perspective.

MF: What was the most interesting thing you learned about the Watergate scandal from working on this series?

DS: It is frequently described as a very stupid situation, but I think just realizing how unnecessary the whole thing was. I thought that the shenanigans that they were organizing were because it was very close and that this was a last-ditch attempt to snatch victory. They were going to win, hands down going to win, and I think that speaks to the dangerous ambition that was behind so much of the willpower of the situation.

Even though they were 19 points ahead and the victory was in the bag, they're still going to play dirty, and events cascade from that. I still can't quite get my head around it. That was something that really shocked me. I thought, why did they do this at all?

MF: Betty, with all the crazy characters in this series, Mo Dean seems to be the only one with her “head on straight.” Can you talk about that?

Betty Gilpin: That's right. Martha had her head on straight, too. It's just a different kind of head, I guess. What struck me was, I didn't realize there was so much time between the break-in and the discovery of the break-in. Of course, during which Martha was the only person saying the administration is behind this, you guys are crazy, and no one wanted to listen to her. I didn't realize that it had been so long, this huge secret. Mo is kind of pushing John to do the right thing, I think that is a beautiful part of the story.

I think she's inspired by Martha Mitchell. It wasn't in vogue to be yourself out loud. It's very popular now to be the brash social media version of yourself, your most authentic loudest self. But your public persona back then was very buttoned up and formal, and who you were behind closed doors was none of the public's business.

I think Martha Mitchell was one of the only people who there was no difference between who she was at home and in front of the cameras, and she was going to say how she felt and the truth that she knew in public, whether her husband and the administration liked it or not. She's kind of the birth of social media without social media. She's incredible!

MF: Can you both discuss how Mo felt about John Dean the first time she met him?

BG: How did Mo feel? Well, when she first met him, I think it was one of those tender dates where you think, "What have I just left? I could just go. This isn't going to work out." I think she got douchebag vibes, honestly. I'm sorry, Dan. But then I think once that charm was turned on, she fell in love.

DS: Did you say douchebag vibes?

BG: Was that intentionally laced into your performance?

DS: I think there's something inherently douche-baggy about the ambitious drive of a character like John Dean. I think, whether it's specifically that man or just in general, I find that kind of man endlessly fascinating, slightly pathetic and a bit funny. I think that makes for a very enjoyable character to dive into, and think, why is he going after this? What's the endgame?

MF: He wants to be Attorney General, is that correct?

DS: Maybe. Maybe that's the very endgame. I think before that even happens it's just about being in with the boys, which is such a lame ambition, but it's the ambition of so many, and it always makes me laugh. Just the lengths that guys will go to have that sense of validation from a group of crusty old men in suits. I don't get it, but it's fun. It's not exclusive. It was invented somewhere closer to home and I think it's true of any administration. Circles of power make people do crazy things.

MF: Betty, what was it like working with actor and director Matt Ross on this project?

BG:Matt Ross is an incredible director. He's also an incredible actor. I think having a director who is also an actor and gets what is conducive to helping make a good scene is so immensely helpful and really fun. The set was amazing. It was one of the funniest experiences I've had on a set.

I loved working with Dan Stevens. We had the best time together. You never know if between takes the actor that you are working opposite is going to reveal themselves to be a sociopath who thinks the postal service is controlled by mice. So that was out of the way. We had the best time and I think it shows in this series. We've become great friends.