Even combining the casts of ‘Jurassic Park’ and ‘Jurassic World’ is not enough to save this prehistoric franchise from going extinct. 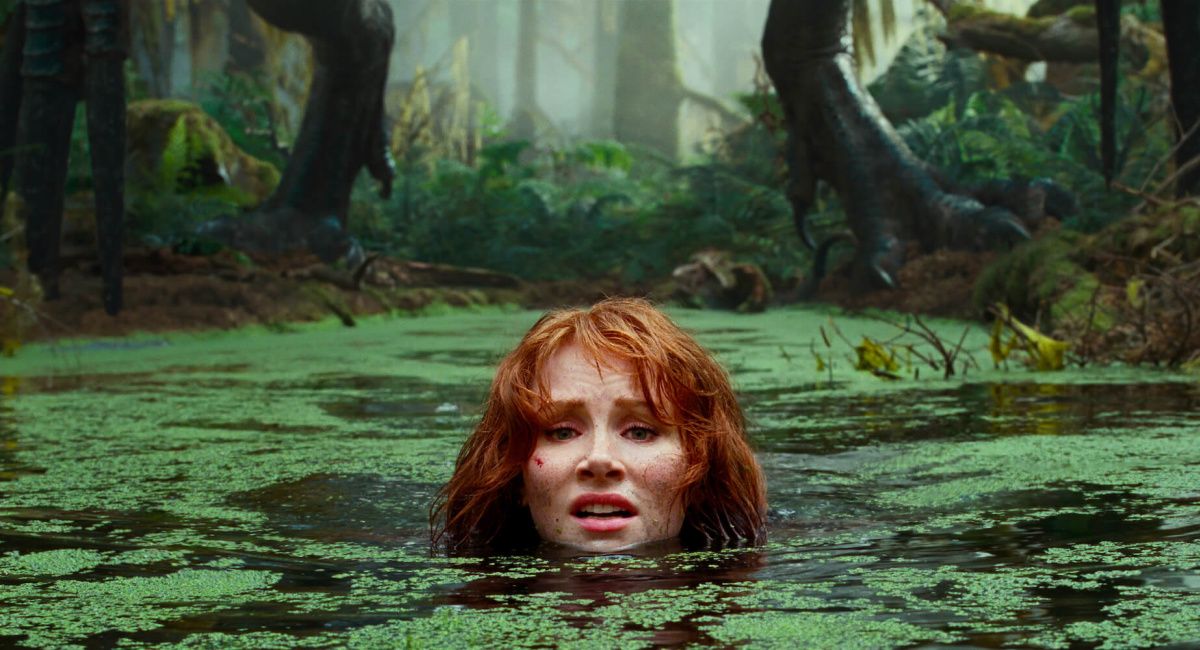 ‘Dominion’ takes place four years after the events of ‘Jurassic World: Fallen Kingdom’ and the destruction of Isla Nublar. Dinosaurs now live and hunt alongside humans all over the world. The result is an absolutely incoherent movie lacking any fun or excitement, that completely waists the talents of the returning legacy franchise actors.

The movie begins by showing us the destruction and chaos that living among dinosaurs has caused since the events of the last film. Owen (Pratt) and Claire (Howard) are living in seclusion, raising the cloned Maisie Lockwood (Sermon) as their own daughter, as well as keeping an eye on Blue and her new baby Velociraptor. However, Dr. Lewis Dodgson (Campbell Scott) of Biosyn Genetics, has hired a team of mercenaries to hunt down and retrieve Maisie and Blue’s baby. After they are taken, Owen and Claire go on a mission to save the missing children.

Meanwhile, giant locust is destroying the food chain, which will eventually result in the extinction of mankind if something is not done about it. Dr. Ellie Sattler (Dern) discovers the locust’s destruction and realizes that it is somehow connected to Biosyn. She visits her old friend and partner, Dr. Alan Grant (Neill) seeking his help to expose Biosyn. He agrees, and the two head to the company’s secret headquarters but they will need help from the inside to gain access.

Enter Dr. Ian Malcolm (Goldblum), who is a guest lecturer working for Dodgson at his facility, but secretly working with Sattler to expose Biosyn for creating the giant locust. As the two groups converge on Biosyn, they will soon meet for the first time and have to work together to take down Dodgson and save Maisie and Blue’s baby.

While I did enjoy the first two Steven Spielberg directed movies in the franchise, ‘Jurassic Park’ and ‘The Lost World: Jurassic Park,’ I’ve never been a huge fan of the series. ‘Jurassic Park III’ did very little to continue the magic of the original two, and I thought the franchise would go extinct after that. Just about fourteen-years later the series returned with ‘Jurassic World,’ which was sort of a fresh start with a new cast but became derivative of the original by about halfway through.

Then came ‘Jurassic World: Fallen Kingdom,’ which I thought “jumped the shark” with its introduction of human cloning to the franchise. I was hoping that ‘Dominion’ would ignore that plotline and redeem itself in this “so-called” conclusion to the franchise, but unfortunately it doubled down on it and delivered an even worse movie than the last one. Completely gone is the magic and wonder that we felt the first time we saw dinosaurs in ‘Jurassic Park,’ now replaced with CGI monsters that terrify the human characters but can actually leave the audience nauseated and even bored at times.

I really thought that if they were going to continue the cloning plotline, that they’d find a way to clone Dr. Ian Malcom, so we could have double Goldblum this time around, which would have actually been kind of genius. But alas that did not happen, in fact, Jeff Goldblum’s role is rather small. Not as small as his cameo in ‘Fallen Kingdom,’ but he is relegated back to a supporting character, as he was in the original, and not the lead that he was in ‘Lost World.’ I would have preferred the actor had a larger role, but I understand that the filmmakers wanted to focus on Owen and Claire, and Alan and Ellie’s relationships instead. That being said, Goldblum’s talents were once again wasted in this film.

The same can be said for Laure Dern and Sam Neill, who deserved a better film to mark their return to these characters. Dern has the largest role of the two and does her best to make the most of it but is ultimately crippled by the screenplay’s lack of originality. There are some nice character driven moments between Dern and Neill, and it is sweet seeing the couple from the first film reunite all these years later. But again, like Goldblum (who gives an uninspired nod to his shirtless scene from the original), Dern and Neill are mostly used for fan-service and unfortunately, have their talents wasted too.

Among the new characters, DeWanda Wise gives a strong performance as Kayla Watts, a helicopter pilot who helps Owen and Claire. The actress creates a compelling character that unfortunately would be best served in a different movie. Campbell Scott plays Dr. Lewis Dodgson, who was seen briefly in the first film but was played by a different performer. Scott, who is a veteran actor, is absolutely ridiculous as the movie’s big bad, and plays the role like a terrible Bond villain. Also awful is Scott Haze (‘Venom’) as probably the world’s dumbest assassin who also happens to be wearing the worst wig I’ve ever seen!

As for Chris Pratt and Bryce Dallas Howard, I love them both as performers and they both do their best with the limiting material. Their likability as actors carries them through a lot of the film’s plot holes and most ridiculous moments and you are rooting for them throughout, not just to survive as characters, but you are also hoping that as actors they might be able to save the movie. Ultimately, they can’t, but it’s through no fault of their own.

Pratt’s at his best in the action scenes, but also in the quieter moments with Claire, Maisie, Blue and “Baby Blue,” who is super cute! While Howard had a more pivotal role than in the previous movies and is featured front and center in one of the film’s most compelling sequences.

In the end, the ‘Jurassic’ franchise was bound to go extinct eventually, and ‘Jurassic World Dominion’ seems like the asteroid that will kill this beloved series of films. With an incoherent script by Emily Carmichael and Colin Trevorrow, and uninspired directing from Trevorrow as well, not even the likability of Pratt and Howard, or teaming them with legacy actors Dern, Neill and Goldblum was enough to save this prehistoric mess!