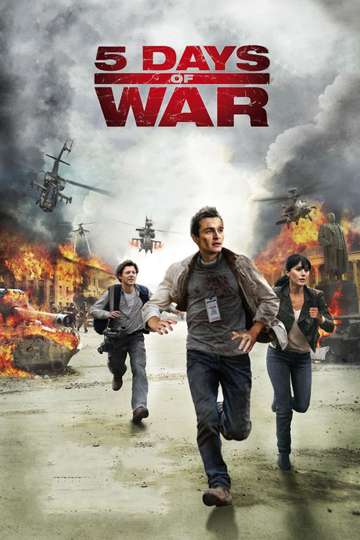 Yearning to watch '5 Days of War' on your TV, phone, or tablet? Finding a streaming service to buy, rent, download, or view the Renny Harlin-directed movie via subscription can be confusing, so we here at Moviefone want to do the work for you.

Read on for a listing of streaming and cable services - including rental, purchase, and subscription options - along with the availability of '5 Days of War' on each platform. Now, before we get into the nitty-gritty of how you can watch '5 Days of War' right now, here are some specifics about the Dispictures, Rex Media, Georgia International Films, Midnight Sun Pictures drama flick.

Interested in knowing what the movie's about? Here's the plot: "An American journalist and his cameraman are caught in the combat zone during the first Russian airstrikes against Georgia. Rescuing Tatia, a young Georgian schoolteacher separated from her family during the attack, the two reporters agree to help reunite her with her family in exchange for serving as their interpreter. As the three attempt to escape to safety, they witness--and document--the devastation from the full-scale crossfire and cold-blooded murder of innocent civilians."

2 Days in New York
Marion and Mingus both come from failed relationships but, by bringing...

Big Game
Air Force One is shot down by terrorists, leaving the President of the...

The Way Back
At the dawn of WWII, several men escape from a Russian gulag—to take a...

Your Highness
A fantasy movie about an arrogant, lazy prince and his more heroic bro...

The Last Exorcism
After years of performing “exorcisms” and taking believers’ money, Rev...

The Dilemma
Longtime friends Ronny and Nick are partners in an auto-design firm. T...

Watch Val Kilmer in the trailer for 'Paydirt'

21 Movies You Can't Believe Didn't Get Any Oscar Nominations

11 Things You Never Knew About 'Cliffhanger' on its 25th Anniversary