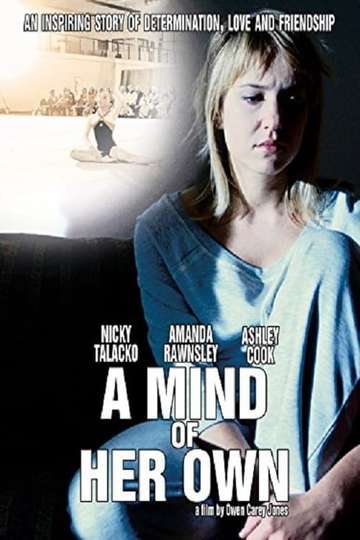 A Mind Of Her Own (2006)Stream and Watch Online

Want to watch 'A Mind Of Her Own' in the comfort of your own home? Discovering a streaming service to buy, rent, download, or view the Owen Carey Jones-directed movie via subscription can be a huge pain, so we here at Moviefone want to take the pressure off.

Read on for a listing of streaming and cable services - including rental, purchase, and subscription choices - along with the availability of 'A Mind Of Her Own' on each platform when they are available. Now, before we get into all the details of how you can watch 'A Mind Of Her Own' right now, here are some particulars about the drama flick.

Interested in knowing what the movie's about? Here's the plot: "Inspired by a true story, A Mind of Her Own tells the poignant and moving story of Sophie, a determined young girl whose ambition to become a doctor is obstructed by the fact that she is severely dyslexic. But Sophie, encouraged by her closest friend, Becky, has never been one to give up and, despite being advised by parents and school teachers to be realistic and pursue something less academic, she puts herself through college and university, in the process achieving a first class degree in biomedical science and a PhD conducting research into post trauma regeneration of the spinal column which ultimately leads to her achieving worldwide recognition for her work and helping to develop a cure for paralysis. Written by Owen Carey Jones"

'A Mind Of Her Own' is currently available to rent, purchase, or stream via subscription on Amazon Prime Video, Hoopla, Apple iTunes, Amazon Video, Google Play Movies, YouTube, Tubi TV, The Roku Channel, Redbox, and Plex .

The Good Nurse
"Based on the unthinkable true story."