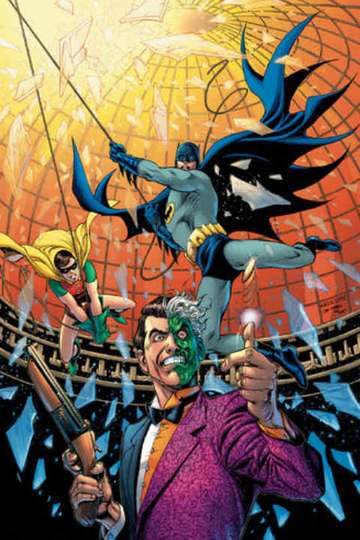 Want to behold the glory that is 'Batman vs. Two-Face' on your TV, phone, or tablet? Discovering a streaming service to buy, rent, download, or view the Rick Morales-directed movie via subscription can be a challenge, so we here at Moviefone want to take the pressure off.

Below, you'll find a number of top-tier streaming and cable services - including rental, purchase, and subscription alternatives - along with the availability of 'Batman vs. Two-Face' on each platform when they are available. Now, before we get into the various whats and wheres of how you can watch 'Batman vs. Two-Face' right now, here are some particulars about the Warner Bros. Pictures, DC Comics, Warner Bros. Animation, DC Entertainment comedy flick.

Released October 10th, 2017, 'Batman vs. Two-Face' stars Adam West, Burt Ward, William Shatner, Julie Newmar The PG movie has a runtime of about 1 hr 12 min, and received a user score of 64 (out of 100) on TMDb, which put together reviews from 134 experienced users.

Curious to know what the movie's about? Here's the plot: "Former Gotham City District Attorney Harvey Dent, one side of his face scarred by acid, goes on a crime spree based on the number '2'. All of his actions are decided by the flip of a defaced, two-headed silver dollar."

Trinity Is Still My Name
"Trinity's back in the saddle again and still horsing around"
The Greasy Strangler
"BULLSHIT ARTIST!"
Batman Unlimited: Monster Mayhem
"It's a fright to the finish for Batman!"
Önce Vatan
Batman: Bad Blood
"Justice runs in the family"
Batman: Return of the Caped Crusaders
"The crusade continues..."
Batman
"He's Here Big As Life In A Real Bat-Epic"
Satan

DC League of Super-Pets
"Sit, stay, save the world."
Batman Unlimited: Animal Instincts
"Hi-Tech, High Stakes, High Danger!"
Batman: Mystery of the Batwoman
"Gotham City's newest hero... or criminal?"
Batman: Assault on Arkham
"Get ready to root for the bad guys."
Batman vs. Robin
"The showdown that will define a destiny"
Batman: Gotham by Gaslight
"As the Ripper stalks Gotham City, the Dark Knight reveals the face of terror."
Batman: The Dark Knight Returns, Part 2
"Justice Returns... Vengeance Returns... Redemption Comes to Gotham."
Batman & Mr. Freeze: SubZero
"It's going to get Cold this Summer!"
Batman: Mask of the Phantasm
"The Dark Knight fights to save Gotham city from its deadliest enemy."
Batman and Harley Quinn
"Gotham City's heroes need a super-villain to fight for justice."
Son of Batman
"Vengeance runs in the blood."
Batman: Year One
"A merciless crime turns a man into an outlaw."
Batman: The Dark Knight Returns
"From the chronicles of the DC Universe comes the sweeping saga of rebirth, revenge, and redemption."

Adam West Gives One Last Interview About Being Batman