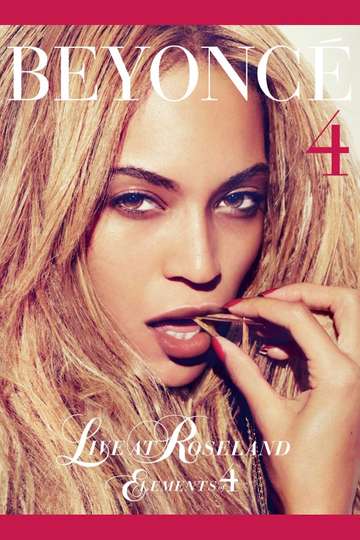 TMDb Score
83
NR 2 hr 30 minNov 29th, 2011Documentary, Music
Live at Roseland: Elements of 4 is a live DVD concert film by American R&B recording artist, Beyoncé Knowles. It was directed by Knowles, Ed Burke and Anthony Green, and was executively produced by Knowles. The DVD was filmed during her 4 Intimate Nights with Beyoncé concert, which was held at the Roseland Ballroom in New York City in August 2011. It was released exclusively through Walmart stores in the United States on November 21, 2011.
Show More
DirectorsEd BurkeAnthony Green
StarringBeyoncé
Where to WatchFull Cast & CrewNews

Beyoncé
as Herself (as Beyoncé)

On The Run Tour
Beyoncé and Jay Z perform live in Paris at Stade de France during thei...

BEYONCÉ
BEYONCÉ is the fifth studio album by American singer Beyoncé. It was r...