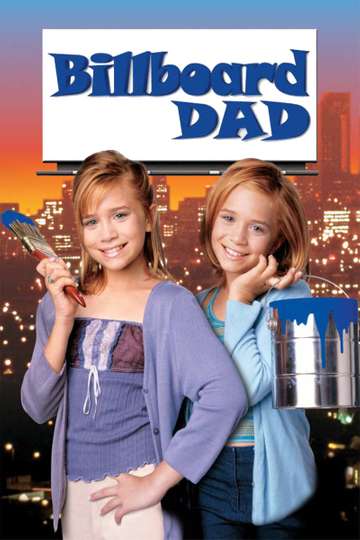 Want to watch 'Billboard Dad' on your TV, phone, or tablet? Hunting down a streaming service to buy, rent, download, or view the Alan Metter-directed movie via subscription can be a huge pain, so we here at Moviefone want to do the work for you.

We've listed a number of streaming and cable services - including rental, purchase, and subscription alternatives - along with the availability of 'Billboard Dad' on each platform when they are available. Now, before we get into the nitty-gritty of how you can watch 'Billboard Dad' right now, here are some particulars about the Warner Bros. Pictures family flick.

Released February 6th, 1998, 'Billboard Dad' stars Mary-Kate Olsen, Ashley Olsen, Tom Amandes, Jessica Tuck The movie has a runtime of about 1 hr 27 min, and received a user score of 60 (out of 100) on TMDb, which assembled reviews from 121 experienced users.

Curious to know what the movie's about? Here's the plot: "High above Hollywood Mary-Kate and Ashley Olsen are playing Matchmakers! One's a surfer. The other's a high diver. When these two sisters team up to find a new love for their newly single Dad, it's a fun-loving, eye-catching California adventure gone wild. Mary-Kate and Ashley star in this fabulously funny love-struck comedy filled with crazy schemes and cool surprises. Determined to find their Dad, Max, a new love, the girls paint a personal ad on a giant billboard in the heart of Hollywood. After a few disastrous dates, Max finally meets Brooke and it's love at first sight. There's just one hitch, her unruly skateboarding son is the girls' arch rival. Now, with the girls plotting every action-packed step of the way, they've got to find out if love really does conquer all. Full of outrageous events, mixed-up matches and lots of laughs, Billboard Dad tops the charts as Mary-Kate and Ashley's coolest mischief-making adventure ever!"

Our Lips Are Sealed
The Challenge
"Rival Sisters. Challenge of a Lifetime. Let the Games Begin!"
Holiday in the Sun
"Sun, summer and fun. Smugglers, suspense and treasure."
Passport to Paris

Cheaper by the Dozen
"Growing pains? They've got twelve of them!"
Getting There
"Sweet 16 and Licensed to Drive"
It Takes Two
"Two identical strangers. Two different worlds. One perfect match."
Switching Goals

New York Minute
"Anything can change in a New York minute."
Winning London
When in Rome
The Parent Trap
"Twice the Fun, Double the Trouble."

New 'Three Billboards' Controversy: It Was Stolen From the Olsen Twins