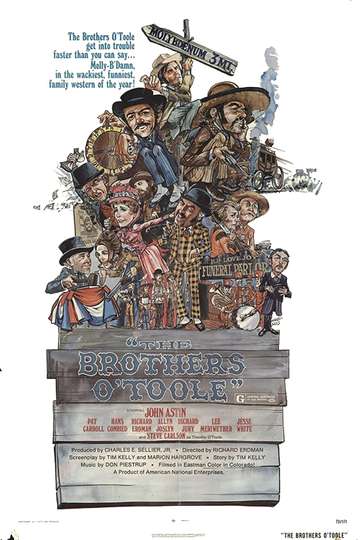 Want to watch 'Brothers O'Toole' in the comfort of your own home? Hunting down a streaming service to buy, rent, download, or view the Richard Erdman-directed movie via subscription can be tricky, so we here at Moviefone want to do the heavy lifting.

Read on for a listing of streaming and cable services - including rental, purchase, and subscription options - along with the availability of 'Brothers O'Toole' on each platform. Now, before we get into the fundamentals of how you can watch 'Brothers O'Toole' right now, here are some specifics about the CVD Studios, American National Enterprises western flick.

Released May 16th, 1973, 'Brothers O'Toole' stars John Astin, Pat Carroll, Hans Conried, Richard Erdman The movie has a runtime of about 1 hr 35 min, and received a user score of (out of 100) on TMDb, which collated reviews from respected users.

You probably already know what the movie's about, but just in case... Here's the plot: "The O'Toole Brothers are Eastern con men, exceptionally good at talking their way out of tight situations. When they ride into Molybdenum, Colorado, not suspecting the riches beneath the streets, they turn the sleepy mining town upside-down for their search for the gold. High-spirited hijinks ensue, with the brothers involved in everything from stolen gambling equipment to a "belchin', cussin' and spittin' " contest."

'Brothers O'Toole' is currently available to rent, purchase, or stream via subscription on Amazon Video, and Amazon Prime Video .