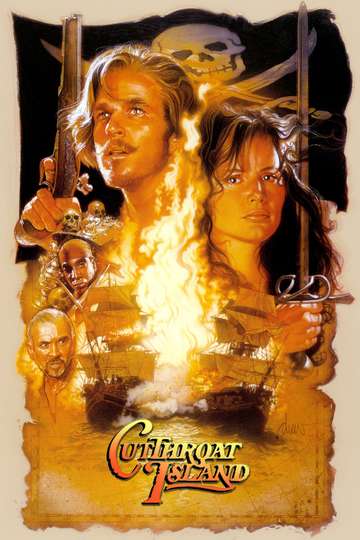 Want to watch 'Cutthroat Island' in the comfort of your own home? Discovering a streaming service to buy, rent, download, or view the Renny Harlin-directed movie via subscription can be confusing, so we here at Moviefone want to do the heavy lifting.

Below, you'll find a number of top-tier streaming and cable services - including rental, purchase, and subscription choices - along with the availability of 'Cutthroat Island' on each platform when they are available. Now, before we get into the various whats and wheres of how you can watch 'Cutthroat Island' right now, here are some finer points about the Metro-Goldwyn-Mayer, Le Studio Canal+, Carolco Pictures, Laurence Mark Productions, Guild, Forge, RCS Video, Beckner/Gorman Productions, Cutthroat Productions, Tele-Communications Inc. action flick.

Released December 22nd, 1995, 'Cutthroat Island' stars Geena Davis, Matthew Modine, Frank Langella, Maury Chaykin The PG-13 movie has a runtime of about 2 hr 4 min, and received a user score of 58 (out of 100) on TMDb, which collated reviews from 424 well-known users.

Curious to know what the movie's about? Here's the plot: "Morgan Adams and her slave, William Shaw, are on a quest to recover the three portions of a treasure map. Unfortunately, the final portion is held by her murderous uncle, Dawg. Her crew is skeptical of her leadership abilities, so she must complete her quest before they mutiny against her. This is made yet more difficult by the efforts of the British crown to end her pirate raids."

The Shadow
"The Shadow knows!"
The Greatest Story Ever Told
The Adventures of Robin Hood
"Excitement... Danger... Suspense... as this classic adventure story sweeps across the screen!"
Allan Quatermain and the Lost City of Gold
"Richard Chamberlain returns in the sequel to 'King Solomon's Mines'"
Blind Date
"A date with her is every man's dream come true. And with dreams like her - who needs nightmares?"
Kull the Conqueror
"Courage conquers all."
Maverick
"In their hands, a deck of cards was the only thing more dangerous than a gun."
Fearless
"Some people are afraid of nothing."
The Three Musketeers
"All for one and one for all!"
Bad Taste
Jade
"Some fantasies go too far."
The Long Kiss Goodnight
"What's forgotten is not always gone."
Drop Zone
"Taking crime to new heights"
Ghosts of the Abyss
"The legend no one can forget has become the greatest adventure ever filmed."
Dick Tracy
"Their turf. Their game. Their rules. They didn't count on HIS law..."
Cliffhanger
"The height of adventure."
Geronimo: An American Legend
"A Warrior. A Leader. A Legend."
The Hard Way
"There's only one way these two are going to get along..."
Troll
"Worlds of Magic, Mystery and Menace."
Hard Rain
"In the worst storm in living memory, one guard stands between five men and three million dollars."
Harley Davidson and the Marlboro Man
"When the going gets tough... the tough take the law into their own hands."