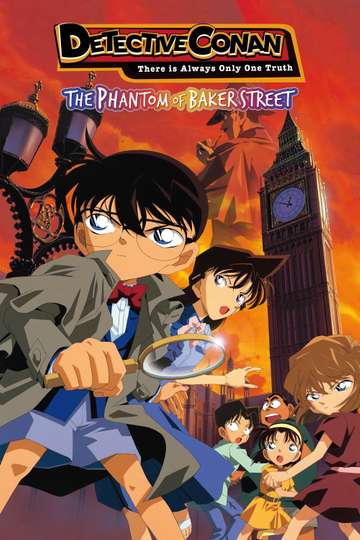 Looking to feast your eyes on 'Detective Conan: The Phantom of Baker Street' on your TV or mobile device at home? Hunting down a streaming service to buy, rent, download, or watch the Kenji Kodama-directed movie via subscription can be challenging, so we here at Moviefone want to do right by you.

Read on for a listing of streaming and cable services - including rental, purchase, and subscription alternatives - along with the availability of 'Detective Conan: The Phantom of Baker Street' on each platform when they are available. Now, before we get into the nitty-gritty of how you can watch 'Detective Conan: The Phantom of Baker Street' right now, here are some particulars about the Toho, Shogakukan Production, TMS Entertainment adventure flick.

Released April 20th, 2002, 'Detective Conan: The Phantom of Baker Street' stars Minami Takayama, Wakana Yamazaki, Kappei Yamaguchi, Akira Kamiya The PG-13 movie has a runtime of about 1 hr 47 min, and received a user score of 76 (out of 100) on TMDb, which collated reviews from 146 experienced users.

Want to know what the movie's about? Here's the plot: "Noah's Ark—the latest in VR technology and a milestone of human innovation—is set for a showcase to Japan's privileged children. They have the honour of beginning a new revolution in gaming; however, their carefree fun is cut short when a company employee is found murdered, with his dying message pointing to a clue hidden within the Ark. Along with the Detective Boys and Ran Mouri, Conan Edogawa enters Noah's Ark to solve this mystery and ensure the perpetrator is caught. But once they're inside the Ark, it takes on a mind of its own, imprisoning them and the children within its worlds. To escape and bring the murderer to justice, Conan and company must navigate a simulated 19th century London and track down the infamous Jack the Ripper—with the lives of 50 innocent children depending on them." .

Movies Like Detective Conan: The Phantom of Baker Street