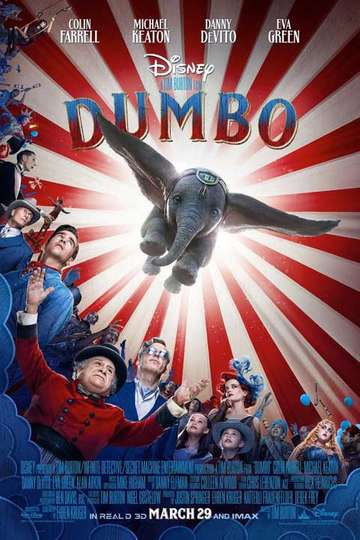 Fancy watching 'Dumbo' on your TV or mobile device at home? Searching for a streaming service to buy, rent, download, or watch the Tim Burton-directed movie via subscription can be tricky, so we here at Moviefone want to do right by you.

Read on for a listing of streaming and cable services - including rental, purchase, and subscription options - along with the availability of 'Dumbo' on each platform. Now, before we get into the fundamentals of how you can watch 'Dumbo' right now, here are some finer points about the Tim Burton Productions, Walt Disney Pictures, Moving Picture Company, Infinite Detective, Secret Machine Entertainment, British Film Commission, UK Government's High End Television Tax Relief, Province of British Columbia Production Services Tax Credit, Government of Australia, South Australian Film Corporation adventure flick.

Released March 29th, 2019, 'Dumbo' stars Colin Farrell, Michael Keaton, Danny DeVito, Eva Green The PG movie has a runtime of about 1 hr 52 min, and received a user score of 67 (out of 100) on TMDb, which collated reviews from 3,612 experienced users.

You probably already know what the movie's about, but just in case... Here's the plot: "A young elephant, whose oversized ears enable him to fly, helps save a struggling circus, but when the circus plans a new venture, Dumbo and his friends discover dark secrets beneath its shiny veneer."

The Lion King
Simba idolizes his father, King Mufasa, and takes to heart his own roy...

Us
Husband and wife Gabe and Adelaide Wilson take their kids to their bea...

Shazam!
A boy is given the ability to become an adult superhero in times of ne...

Dumbo
Dumbo is a baby elephant born with over-sized ears and a supreme lack...

Hellboy
Hellboy comes to England, where he must defeat Nimue, Merlin's consort...