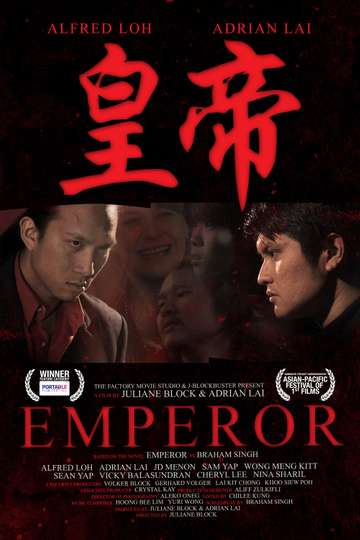 Looking to feast your eyes on 'Emperor' in the comfort of your own home? Tracking down a streaming service to buy, rent, download, or watch the Juliane Block-directed movie via subscription can be a challenge, so we here at Moviefone want to do right by you.

Read on for a listing of streaming and cable services - including rental, purchase, and subscription options - along with the availability of 'Emperor' on each platform when they are available. Now, before we get into the nitty-gritty of how you can watch 'Emperor' right now, here are some details about the mystery flick.

Released January 1st, 2008, 'Emperor' stars Vikneshwaran Balasundran, Adrian Lai, Cheryl Lee, Min Li The R movie has a runtime of about 1 hr 36 min, and received a user score of 70 (out of 100) on TMDb, which assembled reviews from 1 experienced users.

Interested in knowing what the movie's about? Here's the plot: "Poh Sin, Victor and Felix grew up in the shadow of a major Malaysian crime figure. Their lives get complicated as a series of events suck Poh Sin and Victor deep into the triad world while they struggle to protect Felix from a similar fate. A triad war erupts with Hong Kong gangs over lucrative international human trafficking contracts, while personal ambitions take their own toll. The Malaysian police hound Victor over an alleged string of sex crimes and matters spiral out of control."

'Emperor' is currently available to rent, purchase, or stream via subscription on Amazon Video, Tubi TV, and Plex .

Candyman
"Dare to say his name."

Malignant
"A new vision of terror."

Escape Room: Tournament of Champions
"Winning was just the beginning."

Death on the Nile
"Murder was just the beginning."