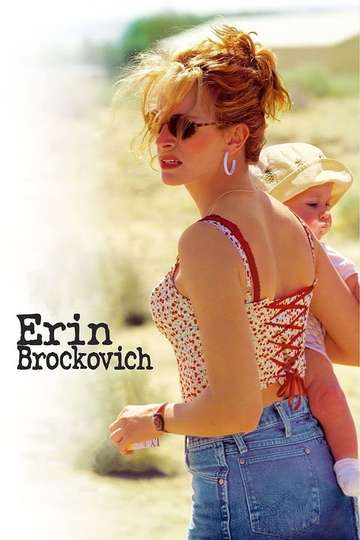 Need to watch 'Erin Brockovich' on your TV, phone, or tablet? Tracking down a streaming service to buy, rent, download, or view the Steven Soderbergh-directed movie via subscription can be difficult, so we here at Moviefone want to help you out.

Below, you'll find a number of top-tier streaming and cable services - including rental, purchase, and subscription options - along with the availability of 'Erin Brockovich' on each platform when they are available. Now, before we get into all the details of how you can watch 'Erin Brockovich' right now, here are some particulars about the Jersey Films drama flick.

Released March 17th, 2000, 'Erin Brockovich' stars Julia Roberts, Albert Finney, Aaron Eckhart, Marg Helgenberger The R movie has a runtime of about 2 hr 11 min, and received a user score of 74 (out of 100) on TMDb, which assembled reviews from 2,521 well-known users.

Interested in knowing what the movie's about? Here's the plot: "A twice-divorced mother of three who sees an injustice, takes on the bad guy and wins -- with a little help from her push-up bra. Erin goes to work for an attorney and comes across medical records describing illnesses clustered in one nearby town. She starts investigating and soon exposes a monumental cover-up."

You've Got Mail
"Someone you pass on the street may already be the love of your life."
The Pelican Brief
Eat Pray Love
"Let Yourself GO"
Bridget Jones's Diary
"Health Warning: Adopting Bridget's lifestyle could seriously damage your health."
America's Sweethearts
"Hollywood's hottest couple just split up. It'll take more than special effects to reunite them."
Sleeping with the Enemy
"Self-Defense is not murder"
There's Something About Mary
"Love Is In The Hair."
Runaway Bride
"Catch her if you can."

My Best Friend's Wedding
"It's about finding the love of your life. And deciding what to do about it."
A Few Good Men
"In the heart of the nation's capital, in a courthouse of the U.S. government, one man will stop at nothing to keep his honor, and one will stop at nothing to find the truth."
Flatliners
"Some lines shouldn't be crossed"

Mona Lisa Smile
"In a world that told them how to think, she showed them how to live."
Notting Hill
"Can the most famous film star in the world fall for the man on the street?"
Philadelphia
"No one would take on his case... until one man was willing to take on the system."
Miss Congeniality
"Never Mess With An Agent In A Dress."
The Mexican
"Love with the safety off."
Lamb
Pretty Woman
"She walked off the street, into his life and stole his heart."
Sleepless in Seattle
"What if someone you never met, someone you never saw, someone you never knew was the only someone for you?"
Conspiracy Theory
"What if your most paranoid nightmares had just come true?"
Stepmom
"Be there for the joy. Be there for the tears. Be there for each other."