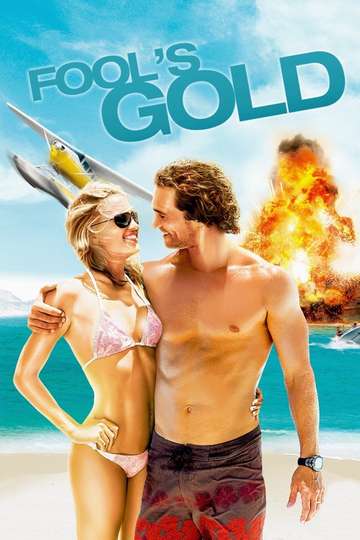 Fancy watching 'Fool's Gold' on your TV or mobile device at home? Searching for a streaming service to buy, rent, download, or watch the Andy Tennant-directed movie via subscription can be a challenge, so we here at Moviefone want to take the pressure off.

We've listed a number of streaming and cable services - including rental, purchase, and subscription choices - along with the availability of 'Fool's Gold' on each platform when they are available. Now, before we get into all the details of how you can watch 'Fool's Gold' right now, here are some specifics about the Warner Bros. Pictures, De Line Pictures comedy flick.

Released February 8th, 2008, 'Fool's Gold' stars Matthew McConaughey, Kate Hudson, Donald Sutherland, Ewen Bremner The PG-13 movie has a runtime of about 1 hr 52 min, and received a user score of 57 (out of 100) on TMDb, which compiled reviews from 1,234 experienced users.

You probably already know what the movie's about, but just in case... Here's the plot: "Treasure hunter Ben 'Finn' Finnegan has sunk both his trusty boat and his marriage to Tess in his obsessive quest to find the legendary 'Queen's Dowry' treasure. When he finds a vital clue that may finally pinpoint the treasure's whereabouts, he drags Tess and her boss along on the hunt. But Finn is not the only one interested in the gold—his former mentor-turned-enemy will stop at nothing to beat him to it."

Gaslight
Miss Congeniality
"Never Mess With An Agent In A Dress."

My Super Ex-Girlfriend
"Hell hath no fury like a superwoman scorned."

The Bounty Hunter
"It's a Job. It Isn't Personal. Well, Maybe a Little..."
The Architect
"A couple hire a maverick architect"
The Wedding Planner
"His big day is her big problem."

Wild Hogs
"A lot can happen on the road to nowhere."

All About Steve
"A Comedy That Clings"
New Fist of the North Star: The Cursed City
"The successor of the assassin's art of Hokuto Shinken gets involved in the conflict between Last Land and Freedom Village."

Couples Retreat
"It may be paradise... but it's no vacation."
Sword of God
"Our world has begun"

The Family Stone
"Feel The Love"
Hercules and Xena - The Animated Movie: The Battle for Mount Olympus

What Happens in Vegas
"Get Lucky"

Ghosts of Girlfriends Past
"You can't always run from your past."

You, Me and Dupree
"Two's company. Dupree's a crowd."

Failure to Launch
"To leave the nest, some men just need a little push."
How to Lose a Guy in 10 Days
"One of them is lying. So is the other."