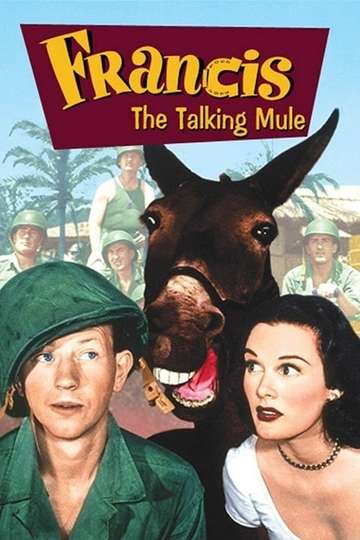 Fancy watching 'Francis' on your TV, phone, or tablet? Finding a streaming service to buy, rent, download, or view the Arthur Lubin-directed movie via subscription can be tricky, so we here at Moviefone want to do the work for you.

Below, you’ll find a number of top-tier streaming and cable services - including rental, purchase, and subscription alternatives - along with the availability of 'Francis' on each platform. Now, before we get into all the details of how you can watch 'Francis' right now, here are some details about the Universal International Pictures fantasy flick.

Released February 8th, 1950, 'Francis' stars Donald O'Connor, Patricia Medina, Zasu Pitts, Ray Collins The movie has a runtime of about 1 hr 31 min, and received a user score of 58 (out of 100) on TMDb, which collated reviews from 14 knowledgeable users.

You probably already know what the movie's about, but just in case... Here's the plot: "The truthful soldier Stirling didn't know how to lie about his source of information, the talking army Mule, Francis, so he was treated as a lunatic and led to one after another hilarious situations, where the mule was the only one that appeared in his right mind. In the process of all this, the mule assisted in uncovering a spy, Mareen, who pretended to be lost among the jungles, but was actually..."