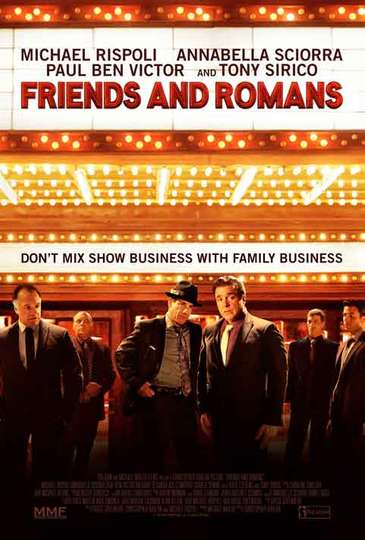 TMDb Score
70
NR 1 hr 28 minOct 17th, 2014Comedy
A group of lifelong mob movie extras mount a production of Shakespeare's Julius Caesar in their local Staten Island theater in order to finally get some speaking roles. But the theater is the secret hideout of a real-life gangster who fancies himself an actor, and whom the FBI are hunting for the recent murder of a Broadway producer. The Feds insert their own undercover agent to audition for the role of Cassius, seeking to determine who is the real gangster among a cast of make-believe criminals. All the while, the oblivious cast seek only to prove to themselves, their families, and friends that they are more than just extras.
Show More
StarringMichael RispoliAnnabella SciorraPaul Ben-Victor 2:13
Where to WatchTrailersFull Cast & Crew

Original Language:English
Friends and Romans on the Web:Official Website