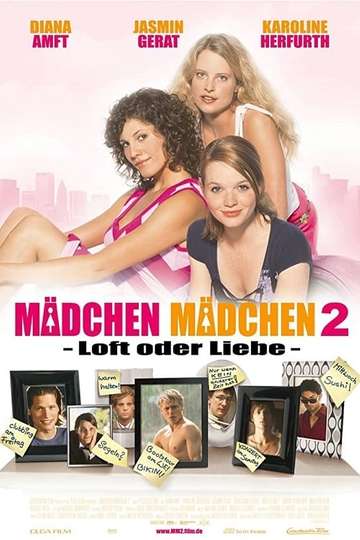 Fancy watching 'Girls on Top 2' on your TV or mobile device at home? Finding a streaming service to buy, rent, download, or watch the Peter Gersina-directed movie via subscription can be confusing, so we here at Moviefone want to do right by you.

Read on for a listing of streaming and cable services - including rental, purchase, and subscription options - along with the availability of 'Girls on Top 2' on each platform when they are available. Now, before we get into the various whats and wheres of how you can watch 'Girls on Top 2' right now, here are some particulars about the Bayerischer Banken-Fonds, Olga Film GmbH, RTL comedy flick.

Released July 7th, 2004, 'Girls on Top 2' stars Diana Amft, Karoline Herfurth, Jasmin Gerat, Max Riemelt The movie has a runtime of about 1 hr 28 min, and received a user score of 49 (out of 100) on TMDb, which collated reviews from 45 knowledgeable users.

Curious to know what the movie's about? Here's the plot: "Mädchen, Mädchen 2 – Loft oder Liebe (Girls On Top 2) is a German-language comedic film directed by Peter Gersina. The movie is the second movie about Inken (Diana Amft), and her friend Lena (Karoline Herfurth),who, having left their parents' homes decide to go in search of a flat of their own. The character Vicky from the first movie played by (Felicitas Woll) is not in this movie and a new friend Lucy (Jasmin Gerat) is an added character. They despair at the price of property in Munich and decide to try and find a rich man to help them in their exploits." .

The Truman Show
"On the air. Unaware."

Bruce Almighty
"In Bruce we trust?"

Project X
"Witness it"
Quality Time
Jesus Loves Me
Girls on Top
Break Up Man
Serendipity
"Sometimes True Love Can Have More Than One Face."
Men in the City
Woman in Love

Prince of Persia: The Sands of Time
"Defy the Future"