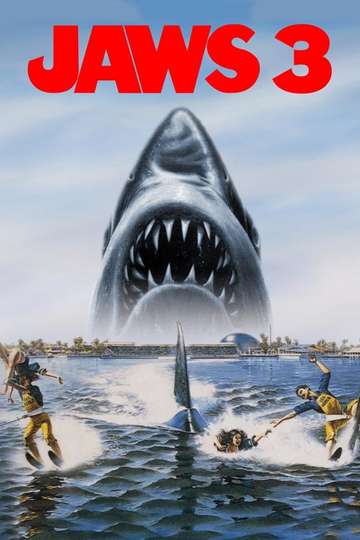 Looking to watch 'Jaws 3-D' on your TV or mobile device at home? Tracking down a streaming service to buy, rent, download, or view the Joe Alves-directed movie via subscription can be challenging, so we here at Moviefone want to do the work for you.

Read on for a listing of streaming and cable services - including rental, purchase, and subscription choices - along with the availability of 'Jaws 3-D' on each platform. Now, before we get into the fundamentals of how you can watch 'Jaws 3-D' right now, here are some details about the MCA Theatricals, Universal Pictures, Alan Landsburg Productions horror flick.

Released July 22nd, 1983, 'Jaws 3-D' stars Dennis Quaid, Bess Armstrong, Simon MacCorkindale, Louis Gossett Jr. The PG movie has a runtime of about 1 hr 39 min, and received a user score of 44 (out of 100) on TMDb, which collated reviews from 884 well-known users.

You probably already know what the movie's about, but just in case... Here's the plot: "This third film in the series follows a group of marine biologists attempting to capture a young great white shark that has wandered into Florida's Sea World Park. However, later it is discovered that the shark's 35-foot mother is also a guest at Sea World. What follows is the shark wreaking havoc on the visitors in the park."

Halloween II
After failing to kill stubborn survivor Laurie and taking a bullet or...

Nurse 3-D
Abby Russell, a beautiful, dedicated nurse with a sinister side, has a...

D-Railed
Passengers on a murder mystery train that crashes into a river must de...

Jaws
When an insatiable great white shark terrorizes the townspeople of Ami...

Initial D
After winning his first competition, Takumi focuses his attention on d...