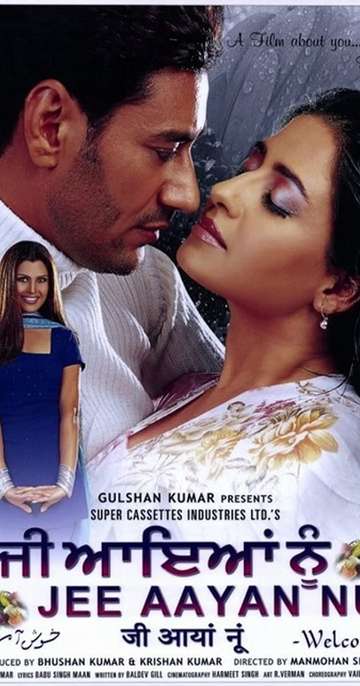 Looking to feast your eyes on 'Jee Aayan Nu' on your TV, phone, or tablet? Finding a streaming service to buy, rent, download, or watch the Manmohan Singh-directed movie via subscription can be confusing, so we here at Moviefone want to do the work for you.

Below, you’ll find a number of top-tier streaming and cable services - including rental, purchase, and subscription alternatives - along with the availability of 'Jee Aayan Nu' on each platform. Now, before we get into the nitty-gritty of how you can watch 'Jee Aayan Nu' right now, here are some specifics about the T-Series romance flick.

Released , 'Jee Aayan Nu' stars Harbhajan Mann, Priya Gill, Gurpreet Ghuggi, Kimi Verma The movie has a runtime of about 3 hr 7 min, and received a user score of 80 (out of 100) on TMDb, which collated reviews from 1 well-known users.

You probably already know what the movie's about, but just in case... Here's the plot: "Operating a Television Network from Vancouver, Sardar Jasbir Singh Grewal, arranges the marriage of his only child, Simar, with Mulhapur-based, Inder Veer Singh, the son of his friend, Arjun, much to the chagrin of his snobbish wife, Kuldip. Simar and Inder find themselves compatible, and an engagement ceremony is arranged. It is during this event that they find out that Inder has no intention of re-locating to Canada, and the ceremony is canceled. After sometime, Inder decides to visit the Grewals in order to try and convince Simar to return to India, and also visit his married sister, who he has not seen for over 7 years, as well as a former girlfriend, Jaspreet, who also live in Vancouver. Once there, he witnesses the plight of his sister, Jaspreet, and other Punjabis, making him question whether Canada is really the perceived 'heaven on Earth'; what C.B.C.D. really means; little knowing Simar has no intention of ever settling down in India."