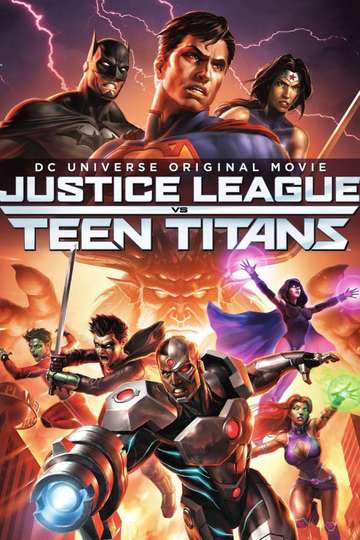 Yearning to watch 'Justice League vs. Teen Titans' in the comfort of your own home? Finding a streaming service to buy, rent, download, or view the Sam Liu-directed movie via subscription can be confusing, so we here at Moviefone want to take the pressure off.

Below, you'll find a number of top-tier streaming and cable services - including rental, purchase, and subscription choices - along with the availability of 'Justice League vs. Teen Titans' on each platform when they are available. Now, before we get into the fundamentals of how you can watch 'Justice League vs. Teen Titans' right now, here are some finer points about the DC Comics, Warner Bros. Animation, DC Entertainment animation flick.

Released March 29th, 2016, 'Justice League vs. Teen Titans' stars Stuart Allan, Taissa Farmiga, Jason O'Mara, Rosario Dawson The PG-13 movie has a runtime of about 1 hr 18 min, and received a user score of 74 (out of 100) on TMDb, which collated reviews from 724 knowledgeable users.

Want to know what the movie's about? Here's the plot: "Robin is sent by Batman to work with the Teen Titans after his volatile behavior botches up a Justice League mission. The Titans must then step up to face Trigon after he possesses the League and threatens to conquer the world."

Teen Titans: The Judas Contract
Suicide Squad: Hell to Pay
"When the world needs the best, they call on the worst."
Justice League: Crisis on Two Earths
"When Justice meets its match, worlds collide."
Batman: Bad Blood
"Justice runs in the family"
Justice League: War
"A time when heroes became legends."
Reign of the Supermen
"Nothing ever truly dies."
Justice League: Throne of Atlantis
"Blood is thicker than water."
Batman Unlimited: Mechs vs. Mutants
The Death of Superman
"Witness the day Metropolis stood still"
Son of Batman
"Vengeance runs in the blood."
Justice League: The Flashpoint Paradox
"Fight the future."
Superman: Unbound
"The machine is coming"
Justice League: Gods and Monsters
"From dark heroes, justice will dawn."
Batman: The Killing Joke
"The madness begins"
Batman: Assault on Arkham
"Get ready to root for the bad guys."
Superman/Batman: Public Enemies
"No one is above the law."
Batman vs. Robin
"The showdown that will define a destiny"
Batman: Under the Red Hood
"Dare to Look Beneath the Hood."
Superman vs. The Elite
"World saved. Humanity lost."
Justice League: Doom
"The end of justice."
Justice League Dark