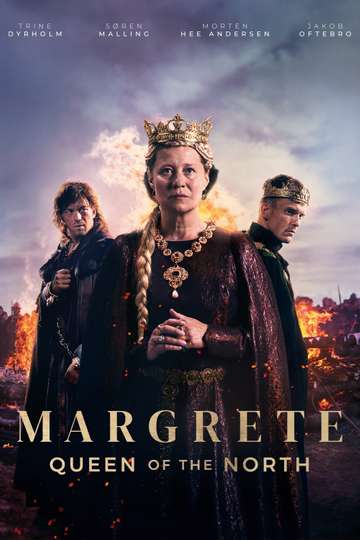 Margrete: Queen of the North (2021)Stream and Watch Online

Want to watch 'Margrete: Queen of the North' on your TV, phone, or tablet? Tracking down a streaming service to buy, rent, download, or watch the Charlotte Sieling-directed movie via subscription can be a challenge, so we here at Moviefone want to do the work for you.

Read on for a listing of streaming and cable services - including rental, purchase, and subscription choices - along with the availability of 'Margrete: Queen of the North' on each platform when they are available. Now, before we get into the fundamentals of how you can watch 'Margrete: Queen of the North' right now, here are some particulars about the Filmkameratene, SF Studios drama flick.

Released December 17th, 2021, 'Margrete: Queen of the North' stars Trine Dyrholm, Søren Malling, Jakob Oftebro, Morten Hee Andersen The movie has a runtime of about 1 hr 55 min, and received a user score of 63 (out of 100) on TMDb, which put together reviews from 29 respected users.

Curious to know what the movie's about? Here's the plot: "1402. Queen Margrete I has gathered the Nordic kingdoms in a union, ruled through her adopted son, Erik. But a conspiracy is in the making and Margrete finds herself in an impossible dilemma that could shatter her life's work: The Kalmar Union."

Meet the Parents
"First comes love. Then comes the interrogation."
Throne of Blood
Heat
"A Los Angeles crime saga."
Clear and Present Danger
"The war of drugs would lead him to the war of power."

The Departed
"Lies. Betrayal. Sacrifice. How far will you take it?"

The Blind Side
"Based on the extraordinary true story"

Samaritan
"25 years ago the world's greatest hero vanished."
Bridesmaids
"Save the date."
Unknown
"Take Back Your Life"

Sicario
"The border is just another line to cross."
The Negotiator
"He frees hostages for a living. Now he's taking hostages to survive."

Knives Out
"Hell, any of them could have done it."

Snowpiercer
"AD 2031, the passengers in the train are the only survivors on Earth."