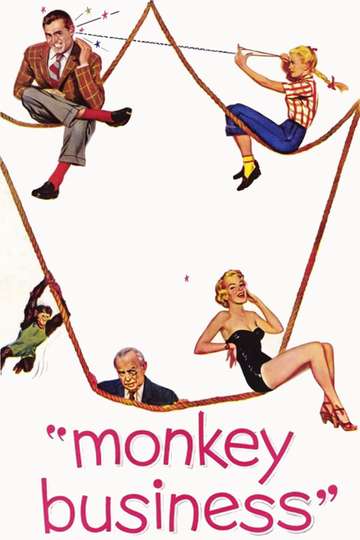 Need to watch 'Monkey Business' on your TV, phone, or tablet? Finding a streaming service to buy, rent, download, or watch the Howard Hawks-directed movie via subscription can be a challenge, so we here at Moviefone want to take the pressure off.

Below, you’ll find a number of top-tier streaming and cable services - including rental, purchase, and subscription choices - along with the availability of 'Monkey Business' on each platform. Now, before we get into the nitty-gritty of how you can watch 'Monkey Business' right now, here are some particulars about the 20th Century Fox comedy flick.

Released September 2nd, 1952, 'Monkey Business' stars Cary Grant, Ginger Rogers, Charles Coburn, Marilyn Monroe The movie has a runtime of about 1 hr 37 min, and received a user score of 67 (out of 100) on TMDb, which compiled reviews from 165 top users.

Curious to know what the movie's about? Here's the plot: "Research chemist Barnaby Fulton works on a fountain of youth pill for a chemical company. One of the labs chimps gets loose in the laboratory and mixes chemicals, but then pours the mix into the water cooler. When trying one of his own samples, washed down with water from the cooler, Fulton begins to act just like a twenty-year-old and believes his potion is working. Soon his wife and boss are also behaving like children."

How to Marry a Millionaire
Three women set out to find eligible millionaires to marry, but find t...

To Catch a Thief
An ex-thief is accused of enacting a new crime spree, so to clear his...

Mr. Blandings Builds His Dream House
An advertising executive dreams of getting out of the city and buildin...

To Have and Have Not
A Martinique charter boat skipper gets mixed up with the underground F...

Gentlemen Prefer Blondes
Lorelei Lee is a beautiful showgirl engaged to be married to the wealt...