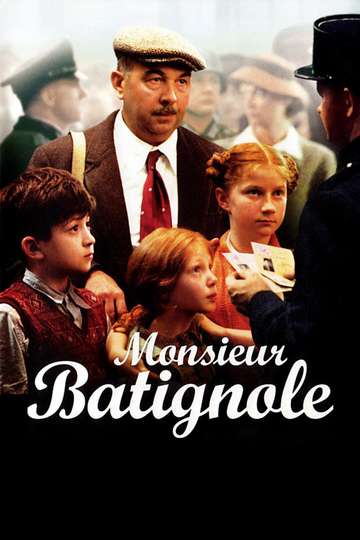 Want to watch 'Monsieur Batignole' on your TV or mobile device at home? Discovering a streaming service to buy, rent, download, or view the Gérard Jugnot-directed movie via subscription can be a challenge, so we here at Moviefone want to do the work for you.

We've listed a number of streaming and cable services - including rental, purchase, and subscription alternatives - along with the availability of 'Monsieur Batignole' on each platform when they are available. Now, before we get into the fundamentals of how you can watch 'Monsieur Batignole' right now, here are some details about the TF1 Films Production, Novo Arturo Films, RF2K Productions, Turkhoise drama flick.

Released October 30th, 2002, 'Monsieur Batignole' stars Gérard Jugnot, Jules Sitruk, Michèle Garcia, Jean-Paul Rouve The movie has a runtime of about 1 hr 40 min, and received a user score of 70 (out of 100) on TMDb, which compiled reviews from 190 experienced users.

Want to know what the movie's about? Here's the plot: "In 1942, in an occupied Paris, the apolitical grocer Edmond Batignole lives with his wife and daughter in a small apartment in the building of his grocery. When his future son-in-law and collaborator of the German Pierre-Jean Lamour calls the Nazis to arrest the Jewish Bernstein family, they move to the confiscated apartment. Some days later, the young Simon Bernstein escapes from the Germans and comes to his former home. When Batignole finds him, he feels sorry for the boy and lodges him, hiding Simon from Pierre-Jean and also from his wife. Later, two cousins of Simon meet him in the cellar of the grocery. When Pierre-Jean finds the children, Batignole decides to travel with the children to Switzerland." .

Battle of the Year
"The World is watching"
Babysitting
Those Happy Days
Didier
The French Kissers
"They might speak the language, but they haven't got a clue."
Santa Claus Is a Stinker
The Visitors
"They weren't born yesterday!"
The Brice Man
French Fried Vacation
The Under-Gifted
On the Other Side of the Tracks
The Visitors II: The Corridors of Time
"They come back!"
French Fried Vacation 3
Ruby & Quentin
Gramps Is in the Resistance
"The movie that cost more than the D-Day Landings"