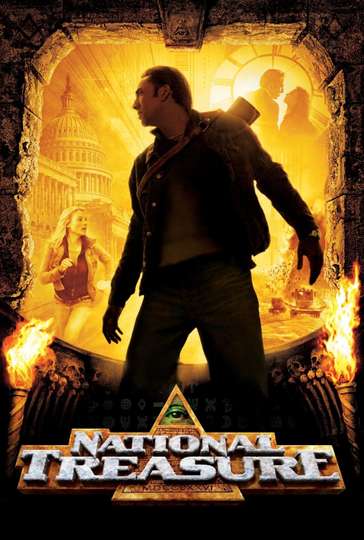 Fancy watching 'National Treasure' on your TV or mobile device at home? Searching for a streaming service to buy, rent, download, or watch the Jon Turteltaub-directed movie via subscription can be a huge pain, so we here at Moviefone want to help you out.

Read on for a listing of streaming and cable services - including rental, purchase, and subscription alternatives - along with the availability of 'National Treasure' on each platform when they are available. Now, before we get into the fundamentals of how you can watch 'National Treasure' right now, here are some details about the Walt Disney Pictures, Jerry Bruckheimer Films, Saturn Films, Junction Entertainment thriller flick.

Released November 19th, 2004, 'National Treasure' stars Nicolas Cage, Diane Kruger, Justin Bartha, Sean Bean The PG movie has a runtime of about 2 hr 11 min, and received a user score of 66 (out of 100) on TMDb, which put together reviews from 5,408 well-known users.

You probably already know what the movie's about, but just in case... Here's the plot: "Modern treasure hunters, led by archaeologist Ben Gates, search for a chest of riches rumored to have been stashed away by George Washington, Thomas Jefferson and Benjamin Franklin during the Revolutionary War. The chest's whereabouts may lie in secret clues embedded in the Constitution and the Declaration of Independence, and Gates is in a race to find the gold before his enemies do."

King Kong
"The eighth wonder of the world."

Hellboy
"From the dark side to our side."
Knowing
"What happens when the numbers run out?"
Gone in Sixty Seconds
"Ice Cold, Hot Wired."

Indiana Jones and the Kingdom of the Crystal Skull
"The adventure continues . . ."
Con Air
"They were deadly on the ground; Now they have wings"

The Mummy Returns
"The most powerful force on earth is about to be unleashed by the two people who should know better."
Face/Off
"In order to trap him, he must become him."

The Sorcerer's Apprentice
"It's The Coolest Job Ever."

National Treasure: Book of Secrets
"The Greatest Adventure History Has Ever Revealed"
Indiana Jones and the Temple of Doom
"If adventure has a name... it must be Indiana Jones."
The Mummy
"The legend you know. The adventure you have yet to imagine."
The Rock
"Alcatraz. Only one man has ever broken out. Now five million lives depend on two men breaking in."

The Day After Tomorrow
"Where will you be?"

Ghost Rider
"Hell is about to be unleashed."

‘The Wicker Man’ TV Series in the Works

Diane Kruger, Ray Nicholson and Neil LaBute Talk ‘Out of the Blue’