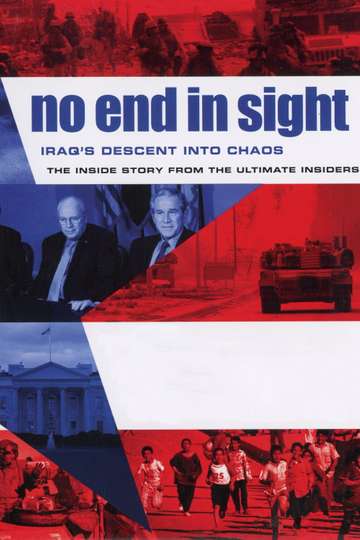 No End in Sight (2007)Stream and Watch Online

Need to watch 'No End in Sight' on your TV, phone, or tablet? Searching for a streaming service to buy, rent, download, or view the Charles Ferguson-directed movie via subscription can be confusing, so we here at Moviefone want to help you out.

We've listed a number of streaming and cable services - including rental, purchase, and subscription alternatives - along with the availability of 'No End in Sight' on each platform when they are available. Now, before we get into the nitty-gritty of how you can watch 'No End in Sight' right now, here are some specifics about the Representational Pictures documentary flick.

Released July 27th, 2007, 'No End in Sight' stars Campbell Scott, Gerald Burke, Ali Fadhil, Robert Hutchings The movie has a runtime of about 1 hr 42 min, and received a user score of 76 (out of 100) on TMDb, which assembled reviews from 65 knowledgeable users.

What, so now you want to know what the movie's about? Here's the plot: "Chronological look at the fiasco in Iraq, especially decisions made in the spring of 2003 - and the backgrounds of those making decisions - immediately following the overthrow of Saddam: no occupation plan, an inadequate team to run the country, insufficient troops to keep order, and three edicts from the White House announced by Bremmer when he took over."

'No End in Sight' Release Dates