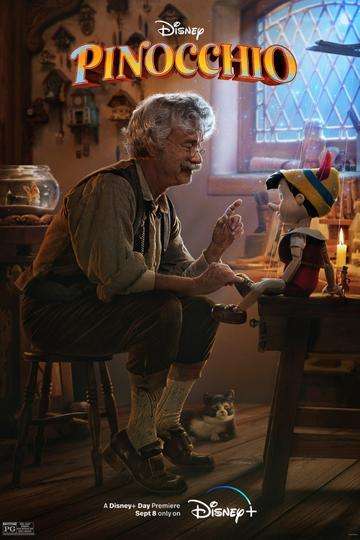 Yearning to watch 'Pinocchio' in the comfort of your own home? Discovering a streaming service to buy, rent, download, or view the Robert Zemeckis-directed movie via subscription can be tricky, so we here at Moviefone want to help you out.

We've listed a number of streaming and cable services - including rental, purchase, and subscription choices - along with the availability of 'Pinocchio' on each platform when they are available. Now, before we get into the nitty-gritty of how you can watch 'Pinocchio' right now, here are some specifics about the Walt Disney Pictures, Depth of Field adventure flick.

Released September 8th, 2022, 'Pinocchio' stars Benjamin Evan Ainsworth, Tom Hanks, Luke Evans, Cynthia Erivo The movie has a runtime of about , and received a user score of (out of 100) on TMDb, which assembled reviews from knowledgeable users.

Want to know what the movie's about? Here's the plot: "Academy Award® winner Robert Zemeckis directs this live action retelling of the beloved tale of a wooden puppet who embarks on a thrilling adventure to become a real boy. Tom Hanks stars as Geppetto, the wood carver who builds and treats Pinocchio (Benjamin Evan Ainsworth) as if he were his own son. Joseph Gordon-Levitt is Jiminy Cricket, who serves as Pinocchio’s guide as well as his "conscience"; Academy Award® nominee Cynthia Erivo is the Blue Fairy; Keegan-Michael Key is "Honest" John; Academy Award® nominee Lorraine Bracco is Sofia the Seagull, a new character, and Luke Evans is The Coachman. Also in the cast are Kyanne Lamaya as Fabiana (and her marionette Sabina), Giuseppe Battiston as Señor Stromboli and Lewin Lloyd as Lampwick. " .

Jujutsu Kaisen 0
"Fight what's within."
Young Eagles
"Every doorsill shall be a fortress"
Bread and Salt
Mia and Me: The Hero of Centopia

DC League of Super-Pets
"Sit, stay, save the world."
Mor
Brigitte Bardot Forever
My Sweet Monster
"Cutie and the beast"

Samaritan
"25 years ago the world's greatest hero vanished."
End of the Road
Alice